We project ourselves into the lives that others share on social media. We engage with those who are no longer here through their digital legacy. We read our own profiles to understand ourselves. How do we relate to madness?

““Have you heard from _____ lately?” her mother asked on the phone, and invoked the spectre of a classmate who had escaped, who was nowhere to be found in any of the places where you typed in names. Her job was so legitimate that it seemed like a reproach: Aerospace Engineer”. In the book No One is Talking About This, Patricia Lockwood talks about a fragmented character with her brain fried from having three thousand tabs open and spending her days chatting to strangers on the internet or photoshopping out the background from bags of peas to make memes.

In one of these, the protagonist talks about the timeline of her old classmate: Where was she? Where had she got to? Had she, asks the narrator “through her goodness and unswerving concentration, broken off into one of the better timelines?”. Better than her own, at least?

The internet, the book reminds us, is full of jokes and gags about wanting to climb out of this “timeline”, the one we’re in, our here and now, and slip into other possible lives. Perhaps because it’s so easy to project ourselves into other places. To know in detail the face and the house of an ex-lover’s new girlfriend, and therefore also how much money she has. To know that your old high school friend is now a mum (twice over). To be able to crawl like a slimy worm through a former friend’s twitter account until you find the reply she made yesterday in the early hours of the morning to a politician’s account about a new regulation that affects her dog. Your old friend was very angry yesterday morning, and you know her dog, and you weren’t there to console her. You get a rough sense of her suffering and the things that concern her, and scrolling through her answers seems, for a while, like talking to her. Like refreshing her page.

On the other hand, when you’ve lost someone’s digital tracks, you might do what Lockwood’s protagonist does: imagine that they must inevitably have risen up to some better place, something like the analogue kingdom of heaven. It doesn’t matter whether all their social media accounts are still active, the difference is that you can’t see them. The impossibility of being able to imagine them shrouds the person in a halo of mystery, and even of progressiveness. She must be doing well. Everything must be going well for her. I’m sure she’s doing so well that she’s forgotten me. In the end, there aren’t so many people who are unreachable (at least I don’t know many people who have disconnected from everything). Rather, you could say that sometimes people have to disconnect as a matter of strict survival (and preservation of their own time, which is a form of self-love). So we stop following, and we silence, and we block. I think.

Sometimes my friends and I swap mobiles so we can enter those realms that are more or less off limits, and when we do this, we adopt primitive forms. Here, here, take it, but just for a minute. Look. Good little doggie. They’ve split up. New girlfriend. What’s her problem? Why does she post these videos? Her baby’s ugly. Urgh. Wipe history. In the middle of this compulsive scrolling, I also find myself procrastinating on all my work by reading papers I don’t understand by a researcher with the same name as me. The Academia website, in its usual strategy of very vain spam, constantly asks me questions about who I am. In other words, every five or ten days, an external entity forces me to corroborate the person I’ve become and to discard those that I have never been nor ever will be. It’s a lot more compromising than answering whether or not you’re a robot.

“Are you the Anna Pacheco who…?”

“Are you the Anna Pacheco who wrote ‘Calibration and Evaluation of a Frequency Domain’…?”

“Are you the Anna Pacheco who wrote ‘Ground humidity mapping using RADARSAT-2 and local data’…?”

“Are you the Anna Pacheco who wrote ‘Application of hyperspectral teledetection for flowers’…?”

No, I’m not. But I wish I was. Now I feel like I want to be her. What does it mean to be hyperspectral for flowers? What’s this about mapping ground humidity, and why don’t I know how to do it, why did I never learn? Google search: how to map the ground. Can you long for a life that you were never even close to? Am I entitled to be offended because there’s an Ana Pacheco, a DJ, who’s performing at Sonar and strangers on the internet ask me if that’s me too? What I ask myself, then, is why I’m not her, and who she is, and if she’s OK, and then I give up caring. The first Ana Pacheco I found was the ex-guerrilla. She is, of all of us, the one with the most suggestive headlines: “From guerrilla girl to model, the FARC guerrilla who takes her clothes off”. But I haven’t heard anything about her for a long time, and besides, her name has only one ‘n’ in it.

To look at oneself in the midst of savage violence is, of course, a narcissistic and middle-class impulse, but I have the internet and I spend a lot of hours working in front of a screen. So we look outside and within, at ourselves and others, we read entire pages of Wikipedia and we read our own profiles to try to understand how we’re seen from the outside. We search. We search. We search. I search: persistent candidiasis, how to cook one day and eat all week, how long does spring asthenia last. We surveil entire timelines of unknown subjects as if we were looking for something specific. And sometimes I don’t know what I’m looking for until I find it. And sometimes I don’t know I need it until I get it.

In Who Will Run the Frog Hospital, Loorrie Moore says “God, how life was full of moments that should have gone differently but didn’t”. They didn’t. Things happen a certain way, but they could constantly go a different way even though we sometimes don’t even see the detour. And I think that sometimes I use the internet like a fugitive, searching for detours and detours and detours, only to come back to the beginning. Girl, what are you saying. My most Marxist friend would tell me that I’m suffering from that monstrosity of capitalism known as chronic FOMO, and that I should open the windows to let a bit of air into the room. I think of a compact mass of men (I’m sure there are lots of them) learning about the Russian attack on the city of Mariupol, I imagine them sitting in front of a computer, remembering that there’s a country called Ukraine and that this country has women and that these women, in their heads, are very attractive. And then proceeding, diligently, to type their new interest into the website. And then, the wank. One of those working-hour wanks where the person, really, is above all the slave of their wank. And then, I see these men getting back to work. Opening the tab about Mariupol, now seriously, to see what’s happened. One piece of toilet paper, two pieces. The compact mass of men melts and looks like mud. What I want to say is that sometimes we’re hamburger and bombing, and I guess we’re repugnant.

In Paris 13th District, the latest film by Jacques Audiard, one of the main characters goes onto an erotic website to strike up a conversation with someone who has caused her problems because of the extreme resemblance between them. Among so many strangers and possibilities, she somehow ends up looking for herself, perhaps as a way of infiltrating this other timeline in which she works in an adult chat room, like someone looking in a mirror to demand explanations about how it went. Or how it could have gone. Or how it could have gone if she’d known how it would have gone.

“Nothing I write would be as it is if I weren’t writing it today, in this century, with a computer in front of me which, like an oracle, like a crystal ball, like a reflection in a pool, shows me everything I want to see and quenches my initial thirst with an answer, an image, a sound, a video, the momentary ability to be a bird, god, cloud, to – for a moment – see, understand, know what I don’t know, what I haven’t learnt, what I’ve forgotten, what I haven’t yet seen or experienced”, explains the writer Irene Solà, author of When I sing, Mountains Dance, in this text about what it means exactly to have a computer with an internet connection. The explanation convinces me. So I say to myself, then, that maybe I just want to be a bird and a god and a cloud looking for everything, and looking for myself.

Other questions: compulsively revisiting things that don’t exist although they once did. When someone dies, you can spend months revisiting their last Whatsapp conversations, rereading everything as a way of reliving it. I once even felt sorry for the likes I hadn’t given in time. So one night, I found myself drunk in the doorway of a building settling my debts with a dead person. Telling them that I liked everything they’d done here, or here, and how they were in this photo, and this one. It reminds me of the exercise by Gabriela Wiener that she explains in Huaco Retrato: “Since my dad died, I have a solitary game I play with myself, or with him? Something halfway between death and technologies. I put his name in my Gmail and all his emails appear, I choose one at random and read it like you read the strips of paper in fortune cookies”. The same exercise can be applied to all types of loss. Same ghosts, different faces.

One night when my eyelids are drooping in front of the screen, I think I start to get delirious: I feel like I have to look for zebra crossings in a CAPTCHA and I can’t find a single one, and I feel stupid for not finding a single zebra crossing, when I’m a human. Because I am a human. I must be. My mobile phone bumps against my forehead, lighting up my face, cowering in a duvet, on a work night. The CAPTCHA still doesn’t recognise me, it asks me to try again, to look for traffic lights this time. In my drowsy state I imagine tiny pedestrians coming out of the squares, cheering for me and only me, waving their hands about: you lovely, beautiful, cool thing, you’re the best I hope you know you’re truly the best. But tell us, how can you not to find a fricking traffic light? 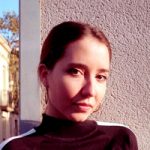