Being ecologically aware of the future means being conscious that there are many time (and spatial) scales that humans should keep in mind and think about. The Ministry of the Future is an artistic initiative within the exhibition After the End of the World designed to convince the world’s governments to implement mechanisms for politics for the long term. The first Minister of the Future is embodied by philosopher Timothy Morton, creator of concepts such as the “hyperobject” and “dark ecology”, and one of the world’s leading thinkers concerned with imagining a new relationship with the planet. We reproduce below the speech he gave at the opening of the exhibition where he explains the functions of this new ministry and reflects on the concepts of End of the World, Future, Life and Art, among others.

My name is Timothy Morton, and I’ve been appointed Minister of the Future by the good people here at the CCCB.

I flew here from Houston, Texas, yesterday, and obviously I’m still feeling very jet-lagged. Part of me is still in Houston. Part of me is kind of smeared out over the Atlantic Ocean. My soul, in a way, hasn’t yet caught up with my body, if you want to put it that way. And that’s exactly the feeling I want to talk to you about today. Being ecologically aware means having a feeling like jet lag. It means realizing that you are kind of smeared out, that your mind hasn’t yet caught up with where physical conditions actually are. And this tells you something deep about time, something that our very carefully measured world keeps very hidden. I’ll say some more about this soon. Just wait.

I’d like to welcome to you to our presentation here, which we’re calling After the End of the World.

What does it mean, end of the world? It means the end of the idea that the human being is the one entity in the universe that gets to define what reality is. It means that there are so many nonhuman beings pressing on us, penetrating us, enabling us to exist, looming on the horizon about to take apart, or actually taking apart, the seemingly stable – because they have lasted for some time – stage set on which we seem to be performing. It means that the things we call nature aren’t quite natural anymore, they don’t behave like a nice neutral background to our human drama. Parts of the stage set are falling on us and it hurts. Some are ripping open and behind we can see all kinds of stuff that we didn’t want to see.

In some ways, the end of the world has already happened. Global warming has already started. That’s not the same as saying that we are all going to die, or that nothing matters. It means that we can’t exist in some kind of cocoon anymore, whether it’s a physical cocoon or an imaginary one. The end of the world has started; otherwise you wouldn’t be able to hear what I just said about stage sets collapsing at all. Don’t trust people who warn you that the end is coming. They are, in a funny way, trying to make it better. This is not a religious apocalypse and we’re not going to get a prize or be punished. It’s more like those films where the lead character realizes that she is already dead.

I’m the Minister of the Future, which means three things.

Thing one. It means I’m responsible for beings who don’t exist yet. These beings are deeply affected by what we are doing right now. In the future two things will be true. They will become more and more true the further into the future you look. Waiting rooms of the exhibition “After the End of the World” | © CCCB, 2017. Author: Gunnar Knechtel Photography

Doing this (moving a small object like a glass a few centimetres) will mean something huge one hundred thousand years from now.

One hundred thousand years is the maximum timeframe of global warming. Okay so this brings me on to Thing 2.

Being aware of the future in an ecological way means being aware that there are way, way more timescales (and spatial scales) on which humans should be looking and thinking. One timeframe for global warming is 100,000 years: 7% of global warming effects will still be happening, slowly being absorbed by igneous rocks.

Another timeframe is 30,000 years. Thirty thousand years from now, ocean currents will have absorbed more of the carbon compounds, but twenty five percent will still hang around in the atmosphere. The half-life of plutonium 239 is 24,100 years. These periods are as long as all of visible human history thus far. The paintings in the Chauvet Cave in France date back thirty thousand years.

Another timeframe is 500 years. Seventy-five percent of global warming effects will persist until five hundred years from now. I try to imagine what life was like in 1511.

This is the measureable future. I’m the Minister of the measurable future. I’m responsible for the beings, human and nonhuman, who don’t yet quite exist, whose existence is determined by what we do now, and how we think now. All our decisions are already influenced by them, if you think about it. Are you going to accelerate around that corner, or are you going to slow down in case someone or something is there? The CCCB have just made it official that we can and should care.

There is another word for this kind of future, as far as we humans are concerned. Waiting rooms of the exhibition “After the End of the World” | © CCCB, 2017. Autor: Gunnar Knechtel Photography

The word for this kind of future is art. Art is the future, and I am the Minister of the Future. I’m holding open the door to show you that there is something else possible through that door. Art is the door. Art isn’t just a picture or representation. Art is happening, doing, making. Art is cause and effect. And art is the future. What does a work of art mean? What even is a work of art? We don’t know…yet. This not-yet feeling isn’t something that goes away. It accompanies what happens right now, like a ghost. Like the moon that you see through a speeding car window: it seems to be following you, floating alongside you. Art holds open the possibility that things could be different, and if you’re like me, you would very much like things to be different, at least some things.

So I’m deeply touched to be the Minister of the Future here. I’m not the ruler, I’m the minister. I point towards the opening called future, I hold it open, and I ask you to wait while the art comes through the opening. I’ve made these waiting rooms in our show, because waiting is the basic key signature, the basic flavour of an age of global warming. Has it started? When will it really start? What happens next? To whom? All these feelings are to do with inhabiting a space in which beings other than humans – beings such as hurricanes; I was in one a few weeks ago in Houston – have their own time signature, which I must undergo.

This huge object, like a gigantic mothership, was floating over Houston for several days. You just had to wait. You were on hurricane time, not you-time. Waiting brings up a lot of feelings, a lot of them are unpleasant. Getting used to these feelings so we don’t hurt each other or rush around like headless chickens will become more and more important.

Waiting implies a future that is uncertain, open. Art is the open future, remember? So art holds open this waiting space, so we can study it, get used to it, figure stuff out in the midst of the anxiety.

And now like a shadow I will become quiet and let others speak. Thank you. 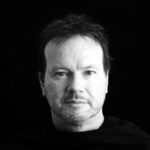 This philosopher and prolific writer created the concept of Dark Ecology and is part of the OOO group of thinkers (Object-Oriented Ontology).