In recent years the phenomenon of conditional narratives, utopian and dystopian alike, has been established as a framework of possibility from which to tackle problems relating to technological development, to the latter’s political uses and to the direct consequences on – the  misnomer that is – nature. From philosophy, art theory, research and specifically artistic practice, a speculative boom has occurred, mainly focusing on projects that write stories about possible futures. The use of the fictional component as a critical tool to re-articulate the here-and-now has been present over the course of history, through a range of different formats, from Bacon’s New Atlantis to Donna Haraway, from simulated life to the imaginable epochs to come. Speculation has been presented as a power to change the present by imagining other futures, but is the idea of future devitalising speculative power?

Literal: A measure of pathos.

Play: A modium makes reference to the measure, and specifically here, to the measurements present in the theoretical proposals of Karen Barad, that in turn are related with a concept of temporality and agency that take quantum theories as a reference. Pathos, here, refers to one of rhetoric’s three modes of persuasion.

The main festivals and institutions have come to embrace  the futuring that many autonomous projects have been tackling in recent years. The future as a possible answer to current uncertainties has made a space for itself among the programmes of the cultural industry’s main events.

The latest edition of Ars Electronica Festival, focusing on Artificial Intelligence, was a clear example of this pre-occupation of great narratives with contemporary storytelling: if the future is now, what are we doing about it?

The guest artists at this edition were the collective Time’s Up, who define themselves as a laboratory for the construction of experimental situations. On this occasion the collective presented Turnton Docklands, a specific site that defines itself as a physical narrative where the audience is invited to tour the re-creation of a coastal town in 2047.

Turnton takes us to an immediate future populated by ecological collapse, the consequence of a climate change as heavily warned as it was ignored. The project consists of a theatrical tour of semi-apocalyptic re-creation that calls upon us to establish “positive” opposition to the undermining of the ecological situation: the possibility of acting now to change the future. In this edition, following the effective criticism of the festival by Heather Dewey-Hagborg, tagged virally as #KissmyArs, Ars Electronica has incorporated a greater number of projects that question not only future temporality but also issues relating to gender, technologies, imposed identities and access to resources. Projects such as the exhibition Feminist Climate Change or the winning of the Golden Nica in the Hybrid Arts category by Maja Smrekar for K-9_topology, which invites us to think beyond the limits of humanism through becoming (m)Other, to undermine reproductive futurism, to defend other modes of being_with. It is, precisely, the voracious criticism of the obsolescence of the humanist conception of the individual subject, as a consequence of this and the conception of normality, which we find in projects such as Open Source Estrogen (presented at the festival together with Byron Rich) by Mary Maggic, resident artist at Prototype_ome , Hangar.

Open Source Estrogen is a collaborative project that combines biohacking with speculative design from a perspective of subversion and biotechnical civil disobedience. The project begins with a question: What if it were possible to generate estrogens  in the kitchen? Based on the pronouncement of a possibility, Open Source Estrogen opens up the debate on the control and production of hormones, on their consequences, on the silenced contamination by xenoestrogens, generated by the petrochemical, agrarian and pharmaceutical industries, and their effects in their capacity as hormonal disruptors. A debate on body sovereignty, extended beyond an anthropocentric conception. If we all, humans and non-humans, are affected by hegemonic forces, then let’s share the tools, the knowledge, and let’s hack the hormonal colonisation systems to generate a social mutagenesis.

Debates on possible futures in relation to the consequences of the so-called Anthropocene continue to focus, in the majority of cases, from the conception of system-of-needs, but not in relationship to responsibilities and relations that we have towards non-humans. Among other questions, due to this, some debates are exaltations of an outdated anthropocentrism that has dyed its hair fluorescent green and that dreams of possible futures. However, it is precisely this idea of future that is championing conditional rhetoric that generates a falsification of commitment. Therefore perhaps the time has come to abandon the future narratopia, a futureness that always marks a distance, a gap, however small it is, which ethical-onto-epistemological excuses sneak through, probably aware of a social fear of the exploited No Future.

The question around which this article revolves is whether, in the face of social concern, this spectacularized incorporation by institutional narratives of the fictional and the speculative is becoming an articulation of a system of production of meanings that neutralises the potential of the fictional and the speculative. It would seem, then, that in these contexts the future becomes system, through promises and hypothetical forces.

The promise of a (possible) future articulates new idols, or as remarked by Santiago López Petit (1994), articulates “a continual recycling of meaning”. The over-exploitation of the speculative and of the idea of future is setting up new idols in a collective falsification of temporarily distancing ourselves from that imminent danger which we intend to combat but which we relate to from the attempt and against which we never commit ourselves. For this reason, many of the speculative discourses serve the cause of endowing reality with meaning, as they are projects that never completely transmute into an affirmative movement, and therefore, they perpetuate the old values of promises for the future, those that they are supposedly fighting against. As a consequence, the future in speculative practices is turning into that eternal instant that never arrives and that through the promise exhausts all possibles.

Will it not be then that between the absence of future and the exhaustion of the possible we need to operate a collective temporal distortion? Projects such as Open Source Estrogen open up a political space for going beyond the exhaustion of the possible and perhaps, in those chinks we can tackle distortions of temporality and forget about the future as a promise that gifts us a lethargic and dreamlike void of non-action. Or re-appropriating Haraway we could propose: Make kin(d ), not future(s). 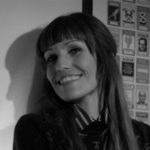 She earned a PhD in Philosophy from the Autonomous University of Barcelona (UAB) with a thesis on the relationship between artistic practices and biotechnologies (January 2014).