This article explores the potentiality of quantum physics through several projects both artistic and theoretical. The entanglement proposed by Sadie Plant will serve as the connecting thread to review projects at different agency levels and the way they interact with and limit new technologies such as quantic computers and AI. Spaces where synchronicity replaces lineality, intra-activity does the same with inter-activity and where subjects and identities are randomly entangled.

“Those were the days, when we were all at sea. It seems like yesterday to me.
Species, sex, race, class: in those days none of this meant anything at all.
No parents, no children, just ourselves, strings of inseparable sisters, warm and wet, indistinguishable one from the other, gloriously indiscriminate, promiscuous and fused. No generations. No future, no past. An endless geographic plane of micromeshing pulsing quanta, limitless webs of interacting blendings, leakings, mergings, weaving through ourselves, running rings round each other, heedless, needless, aimless, careless, thoughtless, amok.”

This quote drips of quantum physics. In it Sadie Plant describes a ruptured causality, a pre-boundaried space where constitute entities superpose, interfere and entangle. Not only that, but given the fluidity of the “micromeshing pulsing quanta”, material differences that usually give rise to prejudices such as those between species, sexes, races and classes no longer seem to matter.

This quote pulses with potentiality.

Plant’s text Zeros + Ones investigates the entanglements between women, feminisms and information technologies, arguing they undermine the fundamental assumptions of patriarchal culture. By starting her book “when we were all at sea”- in a “gloriously indiscriminate” quantum plane – Plant is preparing the readers for alternative and multiple possibilities to emerge and disrupt the existing order.

This essay dives into this quantum sea to probe how quantum thinking and doing might alter how we see and act in our everyday world. To do this we need to understand how quantum science’s seemingly weird webs and apparent chaos – its assault against one’s common sense – entangle with the world of meaning as it does in Plant’s quote.

“Matter and meaning are not separate elements” writes Karen Barad in her book Meeting the Universe Halfway. There, Barad realised her theory of agential realism, weaving quantum physicist Niels Bohr’s philosophy-physics with insights from feminist studies, science studies and post-structuralism to give a material-discursive account of reality. In short, agential realism is a philosophy of a performative reality comprised of multiple intra-locking agencies. For Barad, agency means the ability to act. In Agential Reality, as with quantum measurement, observations and human and non-human agencies of observations in specific relationships cannot be separable and independent, “we are part of that nature we seek to understand”.

In quantum physics, measuring so called complementary variables “require different-mutually exclusive- apparatuses (e.g., one with fixed parts and one with movable parts) for their definition, and therefore these variables, are reciprocally determinable (when one is well defined, the other can’t be).” Following Bohr, for Barad concepts and meanings are also specific physical apparatuses, “concepts are defined by the circumstances required for their measurement”.

The material-discursiveness of apparatuses was explored in Royal College of Art by MA student Tavga Guttstadt’s artwork MeYouThem, as part of the “More is Different” elective I teach in the School of Communication. The elective explores the intersection of quantum physics and art, questioning what it means for students to reimagine their work in the Petri dish of quantum soup. Guttstadt’s piece weaves Bohr’s complementarity principle through the topic of self identity. In MeYouThem four lenses rotate in pairs at different speeds while a mirror hangs roughly at eye level in between: an apparatus with fixed parts and an apparatus with movable parts. Even though the mirror and lens are both made from glass, the former refracts light and the latter reflects it. These apparatuses have their own material agency and both mirror and lens cause us build relations with the world differently in different ways – creating some meanings while excluding others. In MeYouThem, self identities of entities emerge within the space, dependent on the constantly shifting lenses and mirror, but also on the light, people, things and the container – the room. For every revolution of the sculpture, alternative conceptions of self identity emerge within the experience. Agency and identity no longer sit (as if they ever did) with humans alone, everything is at once observing and being observed in the petri dish of the phenomenon.

For Barad the basic ontological unit is the phenomenon. As in Guttstadt’s MeYouThem, in agential realism co-constituitive subjects intra-actively emerge within a phenomena. Intra-action is fundamental to Barad’s link between matter and meaning, and is the mutual constitution of entangled agencies. Entangled subjects therefore emerge within a phenomena not outside of it. Put simply, intra-action is the blending of things, people and stuff’s ability to act.

To dive in deeper, let us compare “intra-action” to the more known term “inter-action”. The prefix “inter-“ means “among” or “in the midst of”, whereas “intra-“ means ”from within”. With inter-actions, objects and subjects pre-exist and always maintain some level of independence. With intra-actions, co-constitutive subjects emerge together within a phenomena and the ability to act also emerges within the relationship. The entangled subjects of Barad’s intra-action are inspired by quantum entanglement, albeit not mathematically equivalently. So why does intra-action matter?

This is where agency comes into the spotlight. Agency is about reshaping, acting and being. Agency – the ability to act – does not exist separately but emerges within the entangled relationships. Through intra-actions, ourselves and non-humans are all brought together within a phenomena and therefore we have a degree of responsibility within that phenomena. Inter-actions defer and deflect responsibility, since we are not always in direct contact with a specific object or person. Whereas in intra-active systems ethics, justice and identities are always changing and unfolding, since the phenomena can be delocalised and/or abstract. Intra-action, therefore, calls into question-fixed boundaries and borders and it helps us think in terms of synchroneity rather than linear cause and effect, similarly to the world invoked in Plant’s quote. Baum & Leahy and Rob Walker in collaboration with Jeremy Adcock and Sam Morley-Short, The Alien Present, sculpture with eye-tracking sensors and screen, 2017.

The artwork The Alien Present, by Baum & Leahy and Rob Walker in collaboration with Jeremy Adcock and Sam Morley-Short questions the fixedness of boundaries and the notion of agential responsibility. The work was developed as part of a collaboration I led between the Royal College of Art, the Centre for Quantum Photonics at the University of Bristol and the V&A Museum, London, questioning what art made about or with quantum computers might be and mean.

The artwork is an alien type growth: seven charcoal black tentacles emerge and decay out of and into the earth. Audience members are invited to view a screen by inserting their head inside an opening in the aliens’ body. When the observers’ eyes focus directly on the screen – the visuals on the screen fix via an eye tracking sensor.  The visuals are tightly mowed English landscape gardens. However when the screen is indirectly observed through mirrors placed around the top of the opening, the garden overgrows into a wild green sea – following a mathematical simulation of a quantum random walk. The Alien Present is an intra-active artwork – the work itself has agency over the viewers – through which the artists asks: “If quantum computing is a field of potentials, how do we garden it? And whose garden is it anyway?” Finally, my artwork Britbot considers the concept of “Britishness” as an intra-active phenomenon. Britbot is a voice and text activated chatbot that was online during 2018 and 2019. It speaks to people about Britishness and learns from what they say. It uses rule-based and generative algorithmic text creation to enable guidance and improvisation. Trained initially on data from a version of Britishness found in the UK government’s citizenship test – a largely white male privileged version of British history and culture -, Britbot was initially biased and not representative of Britain today. However, as an intra-active system including multiple human and non-human agents, the boundaries surrounding British national identity began to ebb and flow as the project evolved. New voices were added and others were diminished.

As Britbot learned from the people it spoke to, the data within the algorithms changed. The chatbot code situated on a server, containing the data of utterances of many humans, acted as an agent within conversation about “Britishness”. The users also had agency over the words they gave the system – the information about Britain that they deemed to be important or not, highlighting the responsibility we have when intra-acting within systems. If the conversation turned nonsensical, which it often did to some amusement or frustration, the responsibility for that emergence would be jointly due to the various agents: the algorithm, the current users’ comments (based on their mood at the time, their upbringing, their genetics, etc.), all of the statements of previous users (based on their moods, their upbringings, their genetics, etc.) and all of the things, prejudices, ‘facts’, knowledge, happenings and opinions tenuously or tightly related to British history and culture pressed onto the material structure of our world that the users know about and choose to share. Many entangled subjects informed the development of Britbot and our notions of Britishness over the project.

To return to Plant, Britbot demonstrated that Britishness and perhaps all phenomena could ultimately be “an endless geographic plane of micromeshing pulsing quanta, limitless webs of interacting blendings, leakings, mergings, weaving through ourselves, running rings round each other, heedless, needless, aimless, careless, thoughtless, amok”. 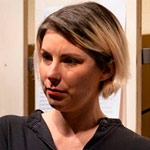 Artist with training in quantum physics, her projects have been exhibited internationally and focus on investigating the impact of the new technologies.