A group of youngsters tied a bike tyre around the body as a swimming aid. Germany, 1925. Source: Nationaal Archief.

For some time now, the CCCB LAB team has been collaboratively compiling a music playlist that can be approached as a soundtrack to the different stages of the creative process: the Eureka moment of a new idea, the development of a project, doubts, the desired or unexpected solution, error, low points, perseverance, starting all over again, getting things right, the joy of teamwork… The following post is a one of the many ways in which music can be a stimulus for personal or collaborative reflection on the act of creation, its paradoxes and its rarer offshoots.

In a conversation with the curator Nancy Spector, Maurizio Cattelan explained that he doesn’t really consider himself an artist. Instead, he sees art as a job, one that he fell into as a result of a series of coincidences. But in spite of this random aspect of his career, Cattelan also said that he feels lucky to be working in a profession in which “I can be a little bit stupid, and people will say, ‘Oh, you’re so stupid; thank you; thank you for being so stupid.” This buffoonery and some actions that were criticised as cheap provocation (like the installation of three children hanging from a tree in a square in Milan), have led this Italian artist to be repeatedly accused of crossing the line between transgression and cynicism.  It is true that satire appears to be falling out of favour, but leaving aside his motivations for a moment, we should thank Cattelan for persevering in removing the mystic aura from creative work. Or better still, for finding a creative space in stupidity.

In his first exhibitions at major art world events, Cattelan presented himself as a mediocre artist, an individual who lacked the attributes to make him worthy of the attention of internationally renowned art institutions. One of these interventions took place during the international exhibition at the 54th Venice Biennale: under the title Tourists, he arranged two thousand (stuffed) pigeons on the windowsills and rafters, where they perched unfazed.  A few months earlier, the Biennale organisers had let Cattelan visit the pavilion were his work was to be shown, and at that point the interior of the building was in ruins and full of pigeons. “For an Italian, it’s like being allowed into the room where the Pope gets dressed,” said Cattelan. After this visit, he decided to reproduce a scene that is perfectly normal in a semi-abandoned building, but which would ordinarily have disappeared before the official opening of the glossy Pavilions. It was project that almost nothing. It could go totally unnoticed, and, at most, it was a comment on the very impossibility of proposing something. Or to borrow Cattelan’s smart-aleck style, we could say that where there are pigeons there is pigeonshit, and it should fall squarely on the Italian Pavilion at the Biennale.

In the course of the same conversation with Nancy Spector, in relation to this project and other matters, Cattelan claimed that one of his creative mottos is encapsulated in the famous Beck song: “I’m a loser baby, so why don’t you kill me.”

This idea of the “loser” who has nothing to offer, the person who doesn’t have ideas of his own and naively decides to highlight the obvious, to reproduce the ordinary world, or to present “unimaginative” proposals, is something that persists in contemporary art. From Robert Morris and his box with the sound of its own making to Oscar Abril Ascaso bursting bubble wrap as a sound piece, there is something a little bit anodyne, pathetic, and “loserish” about conceptual art. For another paradigmatic example of how to present something without seeming to add anything new, we can go back to Cattelan.  At Cabines de bain, Piscine de la Motta (Switzerland), the Italian artist made an exact replica of the work of the artist John Armleder, who was exhibiting next to him. Armleder painstakingly put together an installation made out of bits of wood and mirrors. On the last day of production, Cattelan commissioned an exact replica that took everybody by surprise on the day of the opening, especially Armleder. When asked why he had copied Armleder’s work, his answer was short and clear: “I couldn’t think of anything else.”

In this case the soundtrack was more Amaral’s “I am nothing without you” than Beck’s “Loser”.

Cattelan’s strategy is not really so alien to the rest of us: it’s like copying in an exam at school. As easy as sitting next to the class swot, looking over his shoulder, and keeping an eye on the supervisor. It rarely turns out well, but with patience and perseverance, somebody always ends up getting away with it.

People supposedly copy in exams because they’re lazy, but this cheekiness also expresses something else. We can also see it as a response to the lack of validation methods that are equal to our creative singularities. There is an implicit institutional critique in resisting the imperative to give the right answers, in not being able to, or not wanting to, always implement the best solutions, in not having the possibility of failing. By copying, Cattelan accepted his fear of error, and chose to “cheat”. But while Armleder’s and Cattelan’s works were the same in formal terms, they expressed totally different things. And even though there is something singular about choosing to copy the work of the exceptional artist, an academic examiner would have given Cattelan a zero for being a copycat. There is a lesson to be learnt in this inability to detect creativity that does not fit the standard pattern. Unfortunately, these types of lessons are hard to find in books about educational models.

In an interview a few years ago, Pau Alsina, UOC lecturer and Director of Artnodes Journal on Art, Science and Technology, talked about a more tragic aspect of schemes that assess creativity and innovation in the academic sphere: “An important factor in innovation processes is the failure rate; in Anglo-Saxon countries this right to make mistakes is totally accepted. In our culture (in Spain), particularly in the academic field, we don’t have this margin of error, because it’s still not accepted as a natural part of research. There is a lot of pressure to achieve immediate results, and this gets in the way of experimentation and innovation.” This is not just about copying exams; it describes the backbone of the education and academic model, and its difficulties in capturing non-regulated creativity and innovation. A process that tends to be absurdly univocal about who or what deserves to be labelled innovative or creative.

The LEGO Movie offers an ideal narrative that critically analyses these types of normative processes that tend to homogenise social creativity. Protocols that make it difficult to detect innovations that a priori don’t seem to be as grandiose as those in the manuals.  The hero of the film is Emmet, an ordinary construction worker who is delighted with the devices of domination that condition his life. His neighbours and those in power see him as an everyday guy, so ordinary that he seems to lack attributes.  But through a series of coincidences, Emmet finds himself fulfilling the plans of an ancient prophecy and is virtually declared the saviour of the world. This choice is quickly discovered to have been due to an error, but the cowardly builder ends up showing that he is made of the same mettle as Cattelan. Although he seems to have few useful ideas and a terrible fear of putting them into practice, Emmet sets in motion an enormously powerful imagination to resolve collective problems. In one of the culminating moments of the film, he shows the Master Builders (the superheroes of the story) the profound creativity that lies beneath his tremendous normality. Emmet proves that even following instructions can be transgressive if it is done creatively. The hero of The LEGO Movie is ultimately an everyman, emphasising the fact that the problem is not the attributes that people have, but how these attributes are socially or institutionally recognised.


This is closely linked to what Charles Leadbeater found in his Hidden Innovation report, where he argued that while science-based innovation is one aspect of innovation, this does not mean that innovations are not taking place outside of the scientific sphere.  There are micro processes that take place every day but are not considered innovation due to their size or nature, or because they are not measured by indicators such as R&D investment or patents. Leadbeater describes the society of mass innovation as “a place where creativity and innovation are everyday activities, practiced in many settings by many different people. We can no longer rely on innovation as something produced by an elite of special people working in special places.” One of the problems that he points out is linked to the education system and the need to design it “for the innovation economy, not the industrial economy.” He maintains that mass creativity will come about in societies where the “education system is curiosity-led, creates self-motivation and promotes collaborative problem-solving.” This entails a radical change in the way we approach education, including assessment systems. It even appears to not go far enough unless it goes hand in hand with the defense of a public education system.

For the time being, we are still dominated by the fear of making mistakes and by the promotion of the type of knowledge that can be directly applied to the commercial world, which means that we are lumbered with the closed protocols with which we clumsily classify what is and is not creative, and what is and is not innovative. And it is these models, and the lack of attention to basic needs, that creates supposed “losers”, rather than the skills or attributes of any particular individual or community.

There are no “losers who create”, there are methodologies and indicators that limit the creative potential embedded in society, seeing it as a mere means to reproduce the same production model over and over again. Tools that compartmentalise and smother micro processes – those that are considered to be insufficiently productive, or those that are seen as a threat because they are too disruptive. As Einstein said, we can’t expect things to change if we just keep doing things the same. Or like Ernold Same, the character in the Blur song with the catchy but disturbing melody that hints at what happens if we always repeat the same thing: a bit like Groundhog Day, but without ever escaping the loop.

«Oh Ernold Same, his world stays the same Today will always be tomorrow Poor Ernold Same, he’s getting that feeling once again Nothing will change tomorrow» 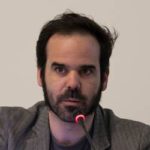 Co-founding member of ZZZINC, platform of innovation and research in culture.

A revolution in education?

Davide Toffolo talks about him as an author of graphic novels and thinks about the future of culture and his ideal cultural lab.