Recently, there has been a major shift in the field of Latin American creation. We have embarked on the production of something that is not literature talking about art, but art and literature at the same time. In this symbiosis of literature with drawing, photography, video art or performance, the name Verónica Gerber Bicecci stands out with a body of work that heralds a new language, which erodes and modifies each shore. We’ll be talking to this artist during her visit to the Kosmopolis festival at the CCCB, from 16 to 21 June 2021.

En el ojo de Bambi is a curatorial story. Mudanza, a written performance. Conjunto vacío, a novel that loses its outline. Los hablantes, an exhibition stripped of its display. Palabras migrantes, the toing and froing of a life between borders.

All are works created by Verónica Gerber Bicecci. All are constructed as exhibitions, books, artefacts that are not subject to a single support. Their interchangeable formats make it possible to rush into or modify them. They have hypnotic power to trap us and dynamite to shake us.

In the odd chapter, they behave like mirrors and don’t always offer images to our liking. They “were” art and literature. Because it is obvious that, in a remote past, they inhabited some territory or another, but then leapt into a different magnitude that then refers to “something else”.

If in Manifiesto del tercer paisaje, Gilles Clément proposes ditches, ambiguous corners or perimeters that are neither urban nor rural as places beyond control, in Gerber Bicecci we might speak of a “third language”. Which is visual image and writing, but which has already undertaken to bring down the walls of these compartments. And not so much for the sum that her knowledge of the two worlds brings, but for the subtraction that this wisdom allows her. For the eventuality of removing rather than introducing, of throwing overboard—in writing and in art—the ballast that paralyses these two areas.

When Montaigne defined the essay as the act of painting oneself, he underpinned the connection between the founding of modern literature and art. And if not art, then the portrait, at least. And if not the portrait, then the self-portrait at least. This was the seed of a collection that did not need museums designed by star-system architects or exhibitions devised by top-draw curators. An imaginary museum whose walls might display The Portrait of Dorian Gray, by Oscar Wilde, and Composition No. 1, by Marc Saporta. A picture gallery made of words where we come across G. K. Chesterton, Guy Davenport or Aldous Huxley. And Chekhov and Henry James and David Markson and Orhan Pamuk and Don DeLillo and Patrick McGrath and Michel Houellebecq and Donna Tartt and Siri Hustvedt…

In Latin American terms, these issues have navigated quite a few pitfalls. Let’s say that, for a long time, novelists in these parts of the world didn’t have as fluid a relationship with the art of their contemporaries as Octavio Paz’s essay did with Marcel Duchamp. This doesn’t mean that Guillermo Cabrera Infante did not incorporate cinema and cabaret, Severo Sarduy the tinsel of carnival and Carlos Monsiváis soap operas, or that Pedro Lemebel’s texts were not foundational forerunners of queer aesthetics…

But these luminous exceptions should not blind us. So-called “great Latin American literature”, at least until the boom, seemed quite comfortable establishing its artistic paragon with the colloquial Colombian gothic of a Botero or the revered cubism of a Picasso.

In recent years, however, things have changed rapidly. The names Enrique Vila-Matas, Julián Ríos, Ignacio Vidal-Folch, Álvaro Enrigue, Agustín Fernández Mallo, Juan Francisco Ferré and María Gainza suffice to confirm this tide. Or César Aira, who alone constructed one of the most unusual museums in the world (including real and imaginary pieces and artists alike). We even have a range of muses, from Sophie Calle to Dominique Gonzalez-Foerster to Chus Martínez.

Recently, there’s been a major turnaround in all of this. Beyond the description, we have embarked on the production of something that is not literature talking about art, but art and literature at the same time. This has been the task of several women writers who combine literature with drawing, photography, video art or performance. Such as Valérie Mréjen, Chris Kraus, Alicia Kopf, Irene Solà, Dara Scully and Martica Minipunto.

Shining out, outstanding and pioneering, in this symbiosis is Verónica Gerber Bicecci. Highlighting an evidence rather than a trend, with a body of work which advances a new language that erodes and modifies each shore. A language that pushes the dynamics of contemporary art to the limits and accepts it, directly, as a literary genre.

If a book gives us the provisions to understand this operation, that book is Conjunto vacío. A narrative that reconstructs the fragmentary inheritance of an absence for which no explanation is found. A “methodology of forgetting”—didn’t the bolero say that absence means forgetting?—in which art is like an anguish that leads us to prefer the devil we don’t know. A real-time drawing of that school of art that runs parallel to the school of life. And in which the question reverberates, over and over, as to what only artists can do in this age when we all do their work. That is: drawing, taking photos—ultimately, producing images.

What we are faced with is, then, an art that is not always exhibited but does always expose itself. And a literature that is not satisfied with narrating that art (that can be done by anyone, more or less), but agrees to build it.

Take, for example, her work with Susan Sontag’s aesthetics of silence, where she visualizes areas of written language that are not perceived in oral speech: those passages that dig punctuation marks or pauses, and are as defining as they are silent. Communicating tunnels that follow the lines of the maps drawn by Blanchot, Sontag, Harold Bloom or Don DeLillo. What if Ulysses and Homer were one and the same presence? What if part of the Bible had been written by a woman? What if Sarajevo’s endless anguish needed Beckett and his Godot to define itself? What if Thelonious Monk, Glenn Gould and Thomas Bernhard shared a common territory that gave rise to their respective works and misfortunes?

Along these lines, Gerber Bicecci composes a theory about the language of the future that could emerge from “photographs, emails and maps”. Or—contrary to activism or the rhetoric of commitment—from putting the individual in the answers and the common in the questions. Or from suspecting a politics in Lawrence Durrell’s Alexandria Quartet. Or from salvaging the autobiographical, “a thousand percent”, over and above the auto-fictional. Or from the need to explode the bunker that protects art or literature as the only way of opening another window on the speech of these times. From switching the places of the one who writes and the one who reads, with a stunned novel “that wants to be left speechless”. Or from equating silence not with what is not heard, but with what is not seen.

Verónica Gerber Bicecci activates a language that is at once verbal, powerful and fragile, that falls apart along its intersections between art and literature; right “at the centre of the intersection between the two universes”.

It is only then, in the vortex of this clash, that the language to come is sparked. 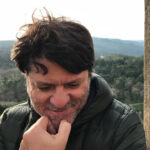