La Fanzinoteca is a self-managed project based in Barcelona, and a travelling module that offers simple solutions to complex problems. Somewhere between a collection, an archive and a reference area, it is inspired by the spirit of amateurism and by a passion for the world of fanzines and micropublishing – the phenomenon it observes – using collaborative and co-creation strategies and growing in a leisurely, sustainable, and organic way. La Fanzinoteca is also a meeting place and a space for reflection on the micropublishing universe; through paper, it advocates the return of craftsmanship, the value of the ephemeral, technological obsolescence, and precariousness as modus operandi.

As it’s name suggests, La Fanzinoteca or ‘Fanzine Library’ is a space that provides access to fanzines – publications that are by definition amateur, marginal and ephemeral –, which has been operating since it almost spontaneously came to life on the shelves of a Barcelona studio space in 2005. Now, a substantial part of its holdings can be found online and accessed physically in its Barcelona headquarters or on any of the routes of its travelling module. On close examination, this simple, self-managed project that lies somewhere between accumulation, collection and archive and has no great aspirations offers an interesting case study of many different subjects at the same time.

To start with, the unique nature of fanzines, which by nature only exist in limited print runs and have a dysfunctional and marginal distribution – a fact that emphasises and boosts their ephemeral status – dooms the project right from the start to being an incomplete, temperamental, and odd collection. Now that the amateur publishing world appears to have found its natural ecosystem in the digital realm (through blogs, networks, and other platforms), publishing a fanzine has become both something of a romantic gesture (or, almost, an anachronism) and a declaration of principles or a political act. Collecting and archiving fanzines and making them available to the public is a curious pastime that adds very interesting nuances to the equation. “La Fanzinoteca is really simply a node,” explains one of the people behind the project, Lluc Mayol, “a node in which we amass and try to organise everything that falls into our hands, within a series of predefined but very broad parameters. I don’t know if it comes close to the idea of the anarchive, but I do know that La Fanzinoteca is not a collection in the usual sense, and that it doesn’t operate as one,” he continues. “What I mean is that there is no methodology or pre-established criteria for new acquisitions, and that we don’t aspire to produce value or to generate wealth. What matters to us is the access we promote, not the artefacts per se.” Detail of the catalogue of the online collection at fanzinoteca.net.

La Fanzinoteca is based on a loose (or expanded) notion of fanzines, which the team behind the project describe as “hard-to-trace editorial practices” and “affordable-precarious, self-published, or artists’ editions”. In black on white: impressions that operate below the radar, capture the moment, and vanish just as quickly as they appeared. “It is a publishing format that defies any closed definition,” says Ricardo Duque of the La Fanzinoteca team. “We generally say that as a fanzine is a publication produced and distributed using low-cost means, that it is amateur and not-for-profit, created for the purpose of sharing information, ideas, or artistic projects in a very specific scene or context,” he continues. “But we think that there is something else that does not define fanzines, but that does form part of this expanded notion, which is the passion with which these publications are created.”

On paper, a fanzine is packaged amateurism. Paradoxically, in recent years we’ve seen fanzines become more sophisticated, and the boundaries that separate them from the traditional publishing world have become increasingly blurred. Particularly on the aesthetic level, but also in regard to content. This is a two-way change: on one hand, it is driven by the digital revolution and the “democratisation” of computer-aided design and printing technology, and on the other, by the return to craftsmanship, which was allowed us to reclaim seemingly superannuated possibilities and finishes such as letterpress, risographs and photocopies. “It may be a limited term if you stick to a strict or traditional definition” adds Ricardo Duque, “but we use it is an expanded way, and we are basically talking about self-publishing. Self-publishing or small press is a set of publishing-related practices that bring together certain ways of doing. They are hybrid devices, and they have obviously been enriched, diversified, and fuelled by access to non-professional production and copying tools, and to the enormous amounts of information that is available to us today. It is really an attitude to the practice of publishing.” Lluc adds that “in our opinion, fanzines have always been produced through this amateur approach, and this hasn’t made them inferior to traditional publishing, in either form or content. What differs is their ambition and their scale, and this affects the form and the content. I think that things are actually moving in the opposite direction now: the traditional publishing industry is now reaching out to the form and content of fanzines, in an attempt to reformulate the print publishing business.”

Against a backdrop of archive fever, the La Fanzinoteca team have invented their own database and taxonomy, and they digitalise their holdings collaboratively through what they call Tagging days, where volunteers are fed a hot meal in exchange for helping them to swell their database and improve the project’s visibility and online access. These sessions are an interesting (and imaginative) demonstration of how the underlying austerity and DIY culture can operate with flexibility and rigour. “The project doesn’t reject the academic or institutional spheres,” says Ricardo, “we are aware of them, but they are not our goal or our model. The thing that we like about the project is precisely the fact that it grows as it goes along… totally ignoring established protocols. Just like these fanzines do.” On last count, the La Fanzinoteca catalogue included around 700 issues, and although there is still more than double that number waiting to be catalogued, the numbers are already impressive. Especially if we bear in mind that La Fanzinoteca operates with no budget, and outside of institutional frameworks and procedures. “The archive grows completely haphazardly,” Lluc says, “there is no acquisition plan, we buy a few things now and then, people send us some copies, and we even receive donations of small collections.” As well as its organic, rhizomatic way of growing, La Fanzinoteca also places a great deal of importance on the intrinsic value of ephemera – material that often remains below the radar of cultural institutions until it is given added value by the laws of the market or historical hindsight. Ricardo defends it passionately. “People are still interested in these publications,” he says, “school and university students still turn to La Fanzinoteca to find technical solutions and content they are crazy about. And in a sense, it does not only visibilise and disseminate the publications, but also the practices and ideas that go with them, and this is something that we find genuinely worthwhile.” And the fact is that collections of ephemeral material – of which the Prelinger archive is a paradigmatic example – don’t just conserve objects that were earmarked to be lost or destroyed: they also capture the issues and the zeitgeist of the moment in a very transparent way. Just like Richard Prelinger’s collection of home movies, the marginal, emotional nature of fanzines give them a strong ideological charge, and their enormous potential when it comes to reinterpreting the recent past becomes clear in hindsight. “Of course, when we talk about the holdings becoming a snapshot of our surroundings, we know that they become valuable in historiographical terms if they are contextualised. This is in line with our interests and with the vectors that intersect with the project. We could say that La Fanzinoteca is a fully-fledged Deleuzian device. But what collection or archive isn’t?”

Another of La Fanzinoteca’s quirks is the value that it places on objects, and its desire to become a meeting point, as a way of providing access and as a modus operandi. In this mode, it becomes the Fanzinoteca Ambulant, a mobile version that travels inside and outside the fanzine scene. They are not alone. The third issue of the fanzine Pez, produced by Mon Magán, includes a map of fanzine libraries and swap spaces including La Fanzinoteca (a must-see for anybody interested in the subject). From projects such as Fanzineologia, which don’t stop at collecting but delve further into the phenomenon by means of interviews and other types of documentation, to a complex web of collectors and fans who come and go (with some eventually donating their collection), as well as small fairs (Lluc particularly mentions Gutter Fest, Tenderete and FLIA), and collections that end up swelling the holdings of museums and cultural centres. “Each of these elements work in different ways,” explains Ricardo, “as with Fanzines themselves, specific solutions are bound to be found for each case. For example, we were surprised to learn that Kit Hammonds claims to lose 5-10% of his collection whenever he exhibits it, but at the same time he receives donations that make it 20% bigger. This makes it a very interesting model for the growth and renewal of a collection.” Lluc adds that the ephemeral nature and dysfunctional spirit of fanzines puts La Fanzinoteca and similar projects in an awkward position in some senses. “There is a certain ethical dilemma in the fact that La Fanzinoteca re-situates certain publications in ways that we can’t always be sure the authors would agree with. It’s something that we often discuss, and it always keeps us alert to how we present the project, where and how we do it. I think that the key lies in the essence of La Fanzinoteca, which essentially operates in ways that are very similar to those of the fanzines we work with. That simplifies the dilemma.” 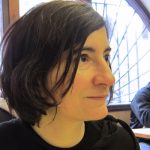 Specialist in computer music, generative audio and synthesis. She coordinates the radio on line project Ràdio Web MACBA and is co-responsible for the ALKU label.

The demise of the celluloid industrial sector is being countered by ingenuity and strength in unity, film DIY has survived and is taking on the world.