Despite the great success of the metaphor, the cloud is rooted firmly in the ground. In this fragment of the book Fulfilment: Winning and Losing in One-Click America, the journalist Alec MacGillis tells of the emergence of Amazon Web Services and its impact on the development of data centres. Text published by courtesy of Periscopi, Península and Farrar, Straus and Giroux.

The cloud. The term was so airy and ethereal. It conjured a fly ball arcing to left-center field, a lazy summer Sunday on the prairie.

In fact, the cloud was profoundly earthbound and material, the antithesis of lightness and luminescence. The cloud lived in data centers, the vast windowless structures that started proliferating in certain corners of the American landscape at the close of the twentieth century as communications and commercial life moved online. The millions of transactions and interactions and activities that had not so long ago made up daily life—a letter sent, a dollar bill extended, a newspaper read, a record played, a film screened—had gravitated from a quotidian and ubiquitous existence into a realm that was almost entirely hidden from view. Inside data centers were the giant servers through which everything moved: the business transactions, the government secrets, the lovers’ emails. By 2018, we were creating 2.5 quintillion bytes of data every day, a sum that was increasing at such an exponential rate that 90 percent of the data in the world had been generated in only the two years prior. Every minute, on average, the world conducted 2.4 million searches on Google, watched 4.1 million YouTube videos, and posted 47,000 photos on Instagram.

The installations were virtually self-sufficient—a data center with more than 200,000 square feet and $400 million worth of servers and equipment required only twenty engineers and technicians to function. What they really demanded were power and water—the former to run the machines, the latter to cool them.

And they demanded security. The data centers were the nerve centers of the nation, and were protected as such. Their walls were twice as thick as those of most buildings, able to withstand winds of up to 150 miles per hour. Their concrete floor slabs could hold up to 350 pounds per square foot. The machines were locked in cages and set off by firewalls. Some had concrete ceilings to hold massive backup generators. The buildings could be mistaken for bomb shelters, large enough for an entire town of paranoiacs.

In theory, the data centers could be anywhere with proximity to fiberoptic cable, plentiful water, and cheap electricity. In reality, they clustered together, a near infinitude of human commerce and communication packed into a handful of buildings in a handful of locations. Even more so than other aspects of the digital landscape, the cloud could be dominated by a few places, and by a few companies, those with the most capacity and most connections.

And the biggest cluster, by far, was in Northern Virginia. From early on, the area had been home to an outsized share of commercial internet providers drawn by the concentration of military contractors and high-tech companies. The area also offered plentiful land—the gently rolling farms spreading west and south of the Potomac toward the Piedmont, with the Blue Ridge peaks in the distance—and cheap electricity fueled by Appalachian coal. In 1992, a group of internet providers met for lunch at the Tortilla Factory in Herndon, Virginia, to make a decision that would seal the area’s advantage: they would physically bring their networks together in a new colocation point, greatly enhancing their reach and value to customers. The hub, dubbed Metropolitan Area Exchange-East, was housed in a cinderblock room within an underground parking garage in Tysons Corner, the edge city straddling the Beltway.

Providing additional gravitational pull were the tax breaks bestowed on the data centers by the state of Virginia and local governments, especially Loudoun and Prince William Counties. For these Washington exurbs, the data centers were ideal neighbors: they spun off tax revenue to pay for the deluxe schools demanded by residents moving into new McMansions, but they added few cars to the clogged roads. In that sense, the paltry number of jobs that came with them was, to use tech lingo, a feature and not a bug.

They cost between $50 million and $70 million apiece. They went up without identifying details—anyone passing by had no idea for whom, or for what, they were being run. “We don’t comment on any project real or imagined,” said Prince William’s director of economic development in 2000, in response to a reporter.

The puncturing of the tech bubble that year left many of the centers vacant, raising the specter of a permanent blight of these huge husks, unfit for any other purpose. But the setback was temporary. The rise of the counterterrorism apparatus after the September 11 attacks created new demand for highly secure data storage—increasingly, the buildings came with “man traps,” one-person entrances outfitted with biometric scanners capable of reading fingerprints, palms, or retinas; there were also fake entrances, bulletproof glass, and Kevlar-lined walls. Some of the data centers were even deliberately set behind hills, to obscure visibility and stop charging vehicles packed with explosives; those less topographically protected had perimeters of concrete posts.

And then came the cloud.

The term’s functional origin—the idea of running applications off of servers that are not your own—came in the early 2000s, in Seattle. Amazon had been building a business called Merchant.com that provided technology for other companies’ e-commerce websites, and it noticed how easy it was for outside users to access Amazon’s technology with well-designed interfaces. Around the same time, the company discovered that many of its software development teams were spending months re-creating the same basic software infrastructure for their projects, over and over. Why not build an infrastructure platform that would make Amazon’s own software development more efficient and also offer it to other companies? Those companies could design applications to run on the infrastructure—everything from computing to payments to messaging—and thus be spared the cost and hassle of building their own infrastructure and running their own servers and data centers.

The company created Amazon Web Services, its cloud-computing branch, in 2003, and began offering its first data storage service in 2006. By 2017, AWS was providing cloud services to, among others, GE, Capital One, News Corp, Verizon, Airbnb, Slack, Coca-Cola, and even direct rivals like Apple and Netflix, while bringing in more than $17 billion in revenue for the year—a tenth of Amazon’s total. “AWS has built one of the most featurefull and disruptive technology platforms that’s existed in my lifetime,” declared AWS’s global head for enterprise strategy, Stephen Orban.

Between its dominance of the cloud and its dominance of online sales, Amazon had positioned itself as a gatekeeper that extracted fees—what economists called “rent”—on two of the biggest realms of digital commercial activity, data storage and e-commerce. You could almost compare it to a tax, except this tax was being collected by a corporation, not by a duly elected government. Or you could compare it to a utility company— Amazon had, in essence, slapped a meter on the side of the nation’s data centers, except without the regulatory limits that utilities faced.

Or you could compare it to the lucrative extraction play of the banks and hedge funds leading up to the 2008 financial crash, which amounted to “tails I win, heads you lose.” No matter what, Amazon was collecting its fee. “I see parallels in Amazon’s behavior to the lending practices of some financial groups before the 2008 crash,” wrote the Financial Times columnist Rana Foroohar. “They used dynamic pricing, in the form of variable rate subprime mortgage loans, and exploited huge information asymmetries in their sale of mortgage-backed securities and complex debt deals to unwary investors including cities such as Detroit. Amazon, for its part, has vastly more market data than the suppliers and public sector purchasers it plans to link. Indeed, I see more and more parallels between online groups and large financial institutions. They each sit in the center of an hourglass of information and commerce, taking a cut of whatever passes through. Like a big investment bank, Amazon can both make a market and participate in it.”

It was also reminiscent of the railroad giants in the late nineteenth century, which controlled both the tracks and much of the oil and coal that was being transported on the tracks, thus allowing them to squeeze smaller fuel producers.

As more and more companies moved to the cloud, and as more companies followed Amazon’s lead in seeking to offer capacity, the data centers sprawled as never before. In Northern Virginia, they covered more than 9 million square feet. Dominion Virginia Power, the state’s dominant utility, which relied heavily on coal as its energy source, was in 2013 projecting a 40 percent increase in data-center power demand over just the next four years. Each data center consumed about as much energy as 5,000 homes.

Land was filling up, especially in Loudoun County, where there were forty data centers by 2013, covering 5 million square feet, the equivalent of twenty-five Walmart supercenters, and the county was expecting to reach twice that over the next decade. In a single two-year span, 2011–2012, the county had added nearly 800,000 square feet in data center space, but not a single square foot of traditional office space. Land was going for more than $1 million per acre in the heart of the county’s “Data Center Alley.”

The county boasted that as much as 70 percent of all internet traffic flowed through its centers each day. Ashburn, an exurb beyond Dulles International Airport that was home to the county’s original data-center cluster, was mentioned in the same breath as the world’s other great internet hubs: Tokyo, London, Frankfurt. “I’m not overstating things by much to say that Data Center Alley has become essential to western culture’s social fabric,” said the Loudoun County economic development director Buddy Rizer. The county boasted, too, that more than $200 million in tax revenue flowed from the centers into its treasury each year, making it possible for the county, the wealthiest in the country, to provide services such as fullday kindergarten that needier communities were unable to offer.

Amazon already had several data centers in Northern Virginia, managed under the name of its data center subsidiary, Vadata. But it needed more capacity, a lot more, because it was angling for a new realm of business. In 2013, it won a $600 million cloud contract from the CIA, and branches of the military were starting to explore shifting to the cloud, too.

In 2014, an unidentified company applied to build a 500,000-square-foot data center near the town of Haymarket, in Prince William County. The site along John Marshall Highway was considerably farther west of the other data center clusters in the area, offering a higher level of secrecy. It was beyond Manassas National Battlefield Park, and abutted the Rural Crescent, a swath of land long protected from development.

But the unnamed company got county approval—Prince William had no zoning rules for data centers. It probably did not hurt that employees of the county’s economic development team made two trips to Seattle in 2013 for meetings at the company’s headquarters, one of the trips in the company of officials from Dominion, the Virginia utility.

All that remained to be done was hooking up the new center to power. 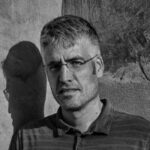 Specialising in politics and government policy, he writes for ProPublica, an independent, non-profit newsroom that produces investigative journalism.

The Weight of the Cloud

In recent years a series of data centres have abandoned anonymity to become new monuments of the information age.