The librarian carefully enters the consignment into her books, 1952 | The U.S. National Archives | Public Domain

A new spectre is sweeping not only Europe but, this time, the whole world, and keeping half of us locked down at home. The days are passing by without changes and we could take advantage of them to think about what could be improved in order to avoid the situation repeating itself. A writer narrates his own lockdown experience and tells how he takes refuge in his books, which he plays with by rearranging them to create his own personal library of Babel in which the volumes talk to each other as they open windows onto new worlds.

A spectre is touring not just Europe but, this time, the whole world, in the form of an unknown virus that knows nothing of frontiers or social inequality. This empirical realisation of a dystopia imagined a thousand times by science fiction has left our streets deserted and hospitals and houses full of people.

Meanwhile, we are witnessing the uncertainty of our futures and of life as we knew it up to now. Each person is coping with this situation of lockdown however they can. You count the first few days and you go through different altered states of mind, wondering whether you might have already caught the virus or have passed it on to someone. You talk with family and friends. Some have caught it and have survived. Others have not been so lucky. Grief is lived out in private, strangers that nobody sees. From the window, I hear the neighbours playing with their kids, I see someone smoking on a balcony, some dogs bark somewhere and the echo resounds somewhere else and I see birds flying through the sky, and the train that passes in front of my house every hour and a half with its compartments always empty: you ask yourself where it must be going and you answer your own question saying that it’s “going nowhere”. Everyone is in motion but going nowhere. Time and space stretch and contract depending on how you perceive them (according to your notion of them) and every day is the same, until the routine becomes an offensive repetition of infinite regressions disseminated around the living room walls in a host of filtrations towards unknown levels with complex tangled structures. Everything that happens has already happened before, but I know that Fortune is biding its time to show how generous it can be.

I will conceive the library as a living entity in which knowledge is generated based on books that are interwoven, a kind of Borgean Library of Babel, which ultimately would have to lead to the infinite library following the tradition of the school of Alexandria.

I force myself to break this offensive repetition of the day-to-day with a few large helpings of imagination. Every day, I reposition the furniture, paintings and chairs that I have at home in order to change the variants and transform everything into a new (micro)world. I organise imaginary meetings with the chairs, secret conferences in front of the paintings on the walls, I call urgent meetings in the living room with the record player, the television, a bag of potatoes and an assortment of tinned food. Everyone listens to me carefully as I explain the situation: “Attention! Listen, being stuck here is our fate and we cannot leave. What are we going to do about it? I’m giving you five minutes to explain your concerns, one by one, if possible.” The room falls silent. I make a questioning gesture with my eyebrows and light up a cigarette. Of all the objects that I have at home, the library is my sacred sanctuary. I decide that the books will no longer be ordered by subjects, languages or chronology, but rather that I will establish a “Warburg-style” arrangement. In other words, I will conceive the library as a living entity in which knowledge is generated based on books that are interwoven, a kind of Borgean Library of Babel, which ultimately would have to lead to the infinite library (although, in reality, my own does not exceed two thousand volumes) following the tradition of the school of Alexandria. Thus, for example, I place The Gates of Paradise, by Jerzy Andrzejewski, next to The Children’s Crusade, by Marcel Schwob: two very different versions of one single event, supposedly historical, about the arduous crusade of 30,000 children towards Jerusalem to free the city from the Turks, and a metaphor of purity as salvation. Next to these two books, I add Gerusalemme Liberata, the epic by Torquato Tasso, in an old, cheap edition with a worn spine.

As the days pass, I continue changing the positions of books (and, in passing, I dust them), while seeking this interconnected knowledge full of cultural intersections. I put Aurora Venturini, for example, side by side with Ivy Compton-Burnett. I find Voyage autour de ma chambre, by Xavier de Maistre, who in 1790 was arrested for participating in a duel and forced by the authorities to remain under house arrest for forty-two days, during which time in confinement he wrote this book, remembering his youth. Next to this, I decide to add the essay Viaje alrededor de una mesa, by Julio Cortázar, a set of comments that really originated around a round table in Paris in the year 1970, in which he disagrees with the limited conception of reality according to socialist realism and proposes opening up the mind to multiple paths and voices through the ambiguous nature of language in its historical projection. In other words, language not as a describer of reality but as its impersonator and creator: a spectre also.

While I am confined in the house the world will be a library, which in turn will contain other infinite worlds, atoms, languages, harmonies, in summary: the whole universe.

As I continue ordering the library, I hear the neighbours playing with the children, I see  someone smoking on the balcony while time stretches and contracts, and every day seems to be the same day, and your dreams seem to be the same dreams in the same bed, and your face seems to be the same face every morning in front of the mirror, and the dogs are barking somewhere and the echo is resounding somewhere else and the birds are flying through the sky, and the train that passes every hour and a half, without passengers, and you ask yourself where it must be going and you answer yourself: “it’s not a real journey but a metaphorical one that you need right now”. I will look you in the eye from a distance until I go blind. We will cross oceans and cities with our minds. We will write very long letters that we never send each other. We will invent worlds in which you and I can go walking tomorrow. The Year of the Spectre could serve as a metaphor for everything that is happening to us today because it has already happened before, but also for what we can improve before it happens again. Everything that we have lost contains in its interior an echo that can become a force for recovery; everything that has been repeated before also enables us to start again. And I say to myself that, until I can go out on the street, until I can see my family and friends again, until I can feel the touch of your skin and we can walk to the place where the flowers grow, and while very day is like the previous one but at the same time is different, while I am confined in the house, I say, the world will be a library, which in turn will contain other infinite worlds, atoms, languages, harmonies, in summary: the whole universe. 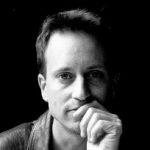 Writer and Doctor in Linguistic, Literary and Cultural Studies.

If all the information we need is already available on the internet, what can libraries offer? Four libraries in Seoul use books to generate physical experiences that dispense with screens.

Readers that live inside us