The Internet Universe Educational Briefcase is a new pedagogical tool for high schools developed by CCCB Education and CCCB Lab. It is designed to take knowledge and reflections about the impact of the Internet on our lives into the classroom. In the lead-up to the launch of the Briefcase, in this post we share some of the questions that have come up during the process of preparing this new material. What does teaching teenagers in the Internet age entail?

A few weeks ago, an upset thirteen-year-old told me that his classmates had deleted him from the class WhatsApp group. A few days later, a nine-year-old girl told me that her friends had thrown her out of their dance group –they apparently spent their breaks making up choreographies in the playground.

These two situations are examples of the same dynamic in two different spaces (from the adult point of view, given that teenagers themselves don’t make this distinction): the schoolyard and the digital world. Nonetheless, the underlying problem is the same: a group of peers leaves out one of its members. The experience of rejection also seems to be similar in both cases, regardless of whether it took place in the physical world or not.

This anecdote illustrates the basic idea that the Internet Universe Educational Briefcase developed by CCCB Education and CCCB Lab aims to transmit. Yes, the Internet is a tool, a medium that we have to learn to use in order to get the most out of it. But above all, young people have to learn values that can help them to handle themselves as well as possible in life, whether it be life on the streets or online.

The Educational Briefcase is part of the Internet Universe project, and grew out of the teacher training sessions that were held at the CCCB in February 2014. These included four talks and workshops that offered an overview of the way the Internet affects our lives on three levels: as individuals, the city, and the planet.

The workshops were designed to be reproduced by the teachers in the classroom. The aim of the Briefcase is to support this process by providing practical educational materials, and also to make these resources available to a greater number of teachers.

The Briefcase consists of five educational units that complement and expand the contents of the face-to-face sessions:

The educational activities in the Briefcase are in line with the official high school curriculum as dictated by the Generalitat de Catalunya. Nonetheless, beyond providing a basic introduction to programming principles and showing students how to calculate greenhouse gas emissions, the idea is to put forward situations that promote critical, creative, constructive reflection about the way the Internet affects our lives, in both the positive and negative sense.

In addition, it brings up questions and concerns such as:

Is it necessary to learn to programme? What is the ideal age at which to start?

The Briefcase does not set out to answer the questions directly; it invites students to understand that the goal is not to learn to programme particular scripts, but to work with logical thinking, to discover that there are different ways of communicating, and that thinking as programmers do can help us to deal with problems that come up at school or in everyday life.

Through this approach, instead of simply learning programming languages, students focus on the logic that hides behind them. Can anybody doubt that it’s a good idea to strengthen logical thought?

How can we prevent teenagers from misusing social networks?

Like all great changes, the introduction of social networks and smartphones and their massive uptake by young people has raised alarm among adults. Here again, the Educational Briefcase focuses on teaching values, without demonising the tool or the way teenagers use it. The project turns this alarm and the dynamics of prohibition around, showing alternative uses that young people can use as a guide.

As Dolors Reig reflected in an interview, “what aspects should we work on to prevent bullying, for example? Critical spirit, empathy… Values are very important because these kinds of tools boost young people’s capacities, both good and bad. You can use a 3D printer to make kidneys or guns. It will depend on your values.”

Going back to the anecdote we started with: is the problem WhatsApp and how students use it? Or is it the fact that a group of teenagers reject one of their classmates and leave him or her out? Likewise: Do we need to teach teenagers to protect their online privacy? Or is it better to teach them to respect themselves and others, both online and offline? You will probably be surprised by the results of a study carried out by the Oxford Internet Institute, reported in Diari de l’Educació, which found that young people in general are more careful than adults when it comes to protecting their privacy on social networks

How can we prevent students from simply copying and pasting information from Wikipedia in their school assignments?

Leaving aside the controversial aspects of Wikipedia, it is clear that this online encyclopaedia offers anybody with an Internet connection access to an enormous, previously unimaginable amount of information, free of charge. Even if only for this reason, we think we should not simply turn our backs on this tool.

The educational unit linked to Wikipedia invites students to approach the encyclopaedia from the perspective of a contributor, so that they gain first-hand experience of the way Wikipedia works and its mechanisms for verifying information. On one hand, the idea is to make students aware of the need to analyse and process the information they want to use, and on the other, to allow them to actively participate in publishing articles. This second aspect is also a way of developing values such as cooperation, honesty, rigour and perseverance, which are essential for academic success with or without Wikipedia.

In short, the Internet Universe Educational Briefcase offers a series of educational activities that allow students to acquire knowledge about the inner workings of the Internet and its impact on our lives, and at the same time works on a series of reflections and values that are intended to improve their lives in the current situation and to help them adapt to constant change.

The Educational Briefcase will be introduced into schools in the 2014/2015 school year. It will be presented to the public at 6 pm on July 3 at the CCCB Beta Station.

The launch will consist of a presentation of the materials and activities, a practical talk on the use of Wikipedia in the classroom by Àlex Hinojo, and an open debate with the participants.

We invite you to join in and continue the debate, either by commenting on this post or in person at Beta Station. 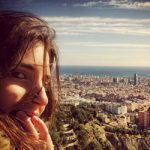 Manager of educational innovation projects at the CCCBLab and for CCCB Educació. She is currently working on the Palau de la Música’s Clavé XXI Social Project.

The Internet Universe Educational Briefcase is designed to take knowledge and reflections about the impact of the Internet on our lives into the classroom.

Internet Universe aims is to offer a global view of the phenomenon to offer tools to the teachers of children who were born digital natives.

Digital Natives: From the Myth to the Reality

Today’s students have been in contact with technologies since their early childhood; they are what are known as digital natives.