To explain the origin of planets, including our own home, Earth – world number three in a planetary system that orbits a star called Sun – is one of the great challenges that still face human knowledge. We have, after all, already spent centuries tenaciously studying the planets in our Solar System. Nonetheless, humankind is only now discovering the true complexity behind one of the most simple, basic questions: How was our world born?

Over the last few centuries, there have been countless theories to explain how planets form. We’ve discovered dozens of new natural satellites around Jupiter, Saturn, Uranus and Neptune, and we’ve seen the Moon cease to be an unreachable lantern in the night and become a veritable tourist destination.

Astronomical and space exploration has recently revealed to us the existence of fascinating sites on neighbouring planets, evoking fantasy landscapes. For example, Venus – regarded as Earth’s “sister planet” because it is the closest in size and in distance – has always been considered a beautiful bright star, but we now know that its surface is shrouded in almost total darkness, and that it is permanently covered by dense clouds that prevent light from getting through. These yellowish clouds also trap heat and produce extreme temperatures that cannot be tolerated by human beings, and levels of atmospheric levels so high that they trigger rainstorms of molten heavy metals. We have also discovered the existence of innumerable asteroids on the outskirts of the solar system, beyond the orbit of Neptune (in fact, we call them “trans-Neptunian objects”), with diameters that range from a few meters to thousands of kilometres, some of them as large as one of Earth’s continents. Pluto, for example, was the first trans-Neptunian object discovered. While most of these objects resonate with the orbit of Neptune and remain a fixed distance from Earth, some are more unstable and could potentially fall towards the centre of the solar system and collide with anything that gets in their way – Earth, for example. Imagine a visitor the size of Barcelona, or even larger, arriving from the furthest reaches of the solar system.

The more we know, the more the Solar System – traditionally the archetype of regularity and heavenly peace – becomes a dangerous and disorderly place, with a complexity and mysteries that we are only now starting to grasp.

Until very recently, our only means of theorising the origin of planets was by studying what we believed to be a unique and familiar example: our Solar System. Back then, our ideas about how a planet formed were quite simple, basically because of a lack of data. But in 1995, observations of a star in the constellation of Pegasus changed our planetary paradigm forever. The discovery of 51 Pegasi, the first planet detected in orbit around a star other than our Sun pushed the Solar System, which we had once believed to be unique in its kind, out of its seat of honour in the Galaxy We call these planets that orbit other stars – and are thus not part of the Solar System – exoplanets. In a matter of months, researchers identified several other external planetary systems. After a few years, there were almost one hundred new worlds forming part of our star map. At the time of writing (August 2014) there are already more than 1800 confirmed exoplanets in orbit around stars in our galactic neighbourhood. And thousands of possible detections in our Galaxy, the Milky Way, are still to be confirmed.

The most interesting thing about this multiplicity of worlds is the range of different configurations, sizes, distances and colours that these exoplanets and their stars display. This diversity of planetary systems suggests a greater and deeper complexity in the process of the birth of planets that we hadn’t been aware of before.


But returning to the main question: how did the planets form? In fact (we think), the process of planetary formation is a natural consequence of the formation of stars. So we should start by asking: how does a star form? Imagine a gigantic cloud somewhere in the Galaxy, consisting mainly of hydrogen molecules and, to a lesser extent, small particles (dust) and more complex molecules. This cloud is gravitationally unstable and collapses under its own weight, producing even denser small masses or spheres, which are then compressed even further, eventually becoming stars. Due to the initial turbulence of the cloud and its spherical rotational symmetry, the result of this collapse is a star surrounded by a circumstellar disc composed of gas and dust. The process so far will only have taken some 100,000 earth years. Now, the newborn star – which can already produce radiation by means of the efficiency of nuclear fusion – begins to shine. It will then continue to gain mass by extracting it from the disk for the next ten million years. By then, the solar wind will have scattered the disk of gas emitted by the newly-formed star.

Most astronomers agree that this circumstellar disk is what gives rise to rocky planets and giant gaseous planets of all kinds, which is why these rotating disks are known as protoplanetary disks. But gaseous planets must form during the first ten million years, while the disk is still young and rich in gas. And although the formation of stars is a relatively simple and well-known process, we are yet to understand the physical phenomena that lead from a protoplanetary disk to the formation of planets.

Obtaining observations of extrasolar planets at different stages of formation is one of the main objectives of astrophysics today. Until a few years ago, the emphasis was on obtaining observations of visible (optical) and infrared light. But the physical processes that we want to witness take place in environments that are mainly made up of molecular gases and dust, and these become more evident and easier to detect in longer wavelengths. The millimetre and sub-millimetre range is particularly intriguing and interesting, because that’s where we can observe cold bodies such as the protoplanetary material in the vicinity of forming planets. This is the range observed by the Atacama Large Millimeter Array, better known as the ALMA telescope, for example.

ALMA, which is located in the Chajnantor plateau high in the Chilean Andes, has numerous antennas that can pick up direct information of several of the early stages of planetary formation. These types of telescopes consisting of more than one antenna are known as ‘interferometers‘. And like any other interferometer, ALMA combines the light collected by its various antennas in order to achieve a very high resolution, usually equivalent to that of a large telescope with a diameter the size of the distance between the two antennas that are furthest from each other. In the case of ALMA, this distance can be up to 16 kilometres.

We started this post by stating that we don’t yet know everything about the planetary formation process. The basic theory is that a planet forms through the accumulation of matter from a protoplanetary disk, in the form of dust particles that begin to grow like a snowball, eventually forming planetary cores several kilometres in diameter. These dust grains are what we call ‘planetesimals’. Next comes a period when these planetesimals stick and collide, in a process that is repeated over thousands of years. As the size of the dust grains increases to a few centimetres more or less, the speed of the collisions between them also increases, and they enter the next stage in which many of the grains break apart and are destroyed, preventing them from growing larger. So how do planetesimals ever manage to grow to the size of one meter or more? And how does a group of planetesimals ever get to the size of a planet like Earth?

One possible physical mechanism for the formation of planetesimals lies in the concentration of particles of dust forming a gap in the centre of the disk (this is very recent science), where the particles are subject to intense gas pressure. The same thing happens in the eye of a tornado on Earth, for example. This suggests that the dust (planetesimals) in protoplanetary disks gathers at the centre of these giant tornados, possibly contributing a little to the growth of the planetesimals. ALMA observation of HD142527 in false colour. We can see the distinctive elements of this protoplanetary disc: the concentration of dust in the gap (in red) and the streams of matter possibly channelled by planets in the formation process. Casassus et al. 2013, published in the journal Nature. Source: ALMA.

Astronomers using ALMA have managed to obtain an amazing image of one of these gas streams flowing across a gap in a protoplanetary disk around a nearby star. The star is called HD 142527, and it is near the constellation of Lupus, at a distance of about 140 “parsecs” [1], from earth, in an area of active star formation (see figures 1 and 2). This ALMA observation also detected two possible planets in the process of formation inside the disc! In case you were wondering, I can tell you that this ALMA image is made up of data from 16 antennas, each with a 12 metre diameter, used simultaneously to achieve the required resolution. All the data was collected in just a couple of hours of observation, and is equivalent to almost one terabyte of raw information that we astronomers then have to process. We live in exciting times. Over the last few years, new technologies have brought to light a great complexity and diversity of physical phenomena linked to planetary formation. But even so, there is still much to discover and understand before we can answer the simple question: How was our planet formed?

[1] 1 parsec is the unit of distance that is most commonly used in galactic astronomy and is equivalent to 3.3 light years. 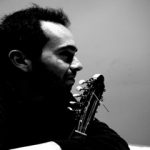 Doctor in Astrophysics from the University of Oxford and musician, he works on the convergence between art and astronomy.