What are the true costs of digital utopia, the most powerful weapon of mass seduction in the expanding arsenal of techno-capitalism? The usual answers – the loss of privacy, the rise of fake news, the risks of cyberwarfare – are, of course, not wrong. But, in staying on the surface, they invariably miss the deeper shifts and transformations that are not immediate and whose effects cannot be directly and explicitly linked to the machinations of Mark Zuckerberg or Elon Musk.

The lie that nurtures the utopian myth behind techno-capitalism is that there is only one way to do “big data” or “artificial intelligence” or “cloud computing” – and that this way has already been discovered and perfected in Silicon Valley. The benefits are too numerous and obvious to be even discussed explicitly; a mere invocation of a regularity like Moore’s law often suffices. The numbers go up – and this means “progress.” As for the costs, those could be carefully accounted for, and, when we are lucky, mitigated.

What, however, if the costs of sticking to the “there is no alternative” agenda of techno-capitalism are considerably higher than we have assumed? What if they are ultimately unknowable? What if the progress implied by Moore’s law – which links together the speed, the size, and the cost of micro-processors – is ultimately as one-dimensional as the techno-capitalism that has given birth to it, and if there are other parameters and metrics – related particularly to biodiversity but not limited to it – that, once accounted for, would significantly complicate our faith in the idea that more “techno-capitalism” means more “progress”?

One of the secrets to the immense resilience and longevity of the capitalist system is its ability to disown the costs of its operations, shifting them onto others, or setting them up in such a way that they would be paid for by future generations. Some of the early critics (for example one of the fathers of environmental economics, William Kapp) spoke of “cost-shifting,” finding in it one of the primary driving forces of capitalism. When the true costs of its operation are engineered away, to be felt by others or at a much later point, it’s no wonder that capitalism appears as a benevolent system.

Its latest iteration, techno-capitalism, has perfected these methods to a point where many of us do think that this new socio-economic system is truly as frictionless as its proponents advocate. Its legitimacy rests on the ability of big platforms to convert user data into implicit subsidies that cover the non-trivial costs of us using their services. Thus, it appears that the system truly runs on magic: somehow, one can use the services of Facebook and Google without ever paying for them. There’s no cost-shifting, Silicon Valley assures us, because there are no costs.

When the ideological debate is framed this way, it’s no wonder that something like Moore’s law appears highly credible: we have been trained to believe that it’s only benefits – and “progress”! – that one is to expect from digital technologies. It’s no wonder that our ability to think about alternatives to this system is greatly constrained; when the costs are presumed not to exist, why should one even bother? This is what is truly at stake in making the costs of techno-capitalism fully visible: it’s a pre-requisite to a genuine techno-politics that would be able to redirect digital technologies towards more emancipatory uses. The ultimate irony of the past few decades has been that, in making our own lives increasingly more transparent and visible, techno-capitalism has done its best to confuse us about its own operations. There is a powerful epistemic asymmetry at work here: while all of us, as individuals, are expected to render ourselves objectively “knowable,” techno-capitalism only wants to be known on its own terms, rendering vast chunks of its actual methods, processes, and infrastructures inscrutable. For the most part, they remain invisible as well.

How do we regain the capacity to see them and, hopefully, to discuss their effects? The conventional answer is that we could do so by refining our theories. Ultimately, techno-capitalism is still capitalism – and it’s our inability to think through the political economy of data and its associated infrastructures that has rendered our analytical apparatus impotent. There’s much truth in such a diagnosis. After several decades, we still don’t even know how to speak about “data”; is it the product of one’s labour or is it just a residue of social activity? As long as questions like these remain unresolved, we are not likely to get much conceptual – let alone visual – clarity from forays into political economy.

This leaves us with forms of narrative that, in bypassing the formalistic analysis of political economy, might nonetheless reveal some deep flaws in the conventional account of progress that we associate with techno-capitalism.  Correlation does not imply causation, of course, but in our current intellectual environment, where the very terms of the debate have been undermined by our inability to think beyond techno-capitalism, correlation might also be good enough; to think in terms of causation is a sort of intellectual luxury that requires the kind of analytical maturity that, alas, we have not yet reached.

All we can hope for at this point is to grasp the limitations of our own current categories and concepts; it will take a lot of hard work to develop an entirely different conceptual vocabulary to make sense of the new environment – and to build a politics that would allow us to transcend techno-politics and all its limitations. But for this task of cognizing and working through our own limitations, correlations are not only more than enough – they are also a perfect instrument for jolting us out of intellectual passivity by juxtaposing processes and activities that we would normally never perceive together. Joana Moll’s bold attempt to situate the rise of microprocessors against the decline of the number and the diversity of insects is a wonderful and much-needed step in that direction. It’s only by revealing the inadequacy of our notions of technological progress, with its artificial blindness and inattentiveness to criteria that are of no value to techno-capitalism, that we will be able to regain our intellectual and political bearings, and, hopefully, steer the project of techno-capitalism away from destroying all life on earth (even if it succeeds in doing so in the most intelligent manner possible).

The irony of Moore’ law, which is taken as an article of faith by many in Silicon Valley, is that it illustrates something quite different from what its adherents believe. There’s no better testament to the reality of capitalist competition – with competing firms always pouring money into outperforming their peers – than the history of the microchip:  what many technologists take to be “natural” features of a given technology (e.g. the ever-shrinking microchip) are actually just the effects of capitalist competition.  But what drives the demand for all these increases in speed that competing firms are rushing to provide? Is this constant insistence on speed rational?

To the extent that they support social and political projects of dubious utility, such gains in speed are of little emancipatory import. Just in the last decade, for example, we have witnessed a tremendous amount of computing power – underpinned, of course, by the ever-powerful processors – dedicated to the mining of crypto-currencies like Bitcoin. The increases in speed – the stuff of “progress” that techno-capitalism likes to boast of – that undoubtedly underpin such “advances” are of little societal value: the energy consumed in solving cryptographic puzzles (which is what “mining” is at the end of the day) is just a price to be paid for not trusting the state and needing some parallel, non-state system of doing accounting.

It very well might be, however, that this is hardly the only price to pay. And yet, just like in all the other instances of cost-shifting by the earlier capitalist regimes, we have not actually seen the bill yet. Shouldn’t we be doing something to anticipate it? Shouldn’t we demand as much transparency from techno-capitalism as it demands of us? We certainly should – and it’s in this space of speculative juxtaposition and critical correlationism that Joana’s efforts to narrate the rise of microprocessors and the fall of insects make a long-lasting contribution. Hopefully, it will awaken us from our slumber and will make us reflect not only on the costs of progress but also on some of the alternative paths that it might take. Becoming better, faster, and more efficient at making human (as well as non-human) civilisation obsolete should not count as “progress”, even if, under capitalism, it often does.

This text forms part of the catalogue for the installation “Inanimate Species” by Joana Moll, on display at the CCCB from 1 March to 25 April 2022. 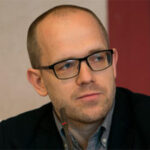 Writer and thinker on the social and political implications of information technology.