Alison Hargreaves and Jeff Lowe move above the high camp onto the Kangtega Plateau, 1986 | Tom Frost, Wikimedia Commons | CC BY

As humans we experience the world at the speed of human thought and for the duration of a human life. It’s impressively fast but it is far detached from the mode of existence of some of the entities with which we share the world. If we take an animistic view of non-humans and allow the possibility of different forms of consciousness, we can experience our environments as being rich with intelligence and knowledge.

I am writing this as one half of the multidisciplinary artist duo Xenoangel. Since 2017, we have been nurturing a hybrid practice of world(re)building. Recently, we completed a real-time animation project called Supreme which presents a symbiotic world on the back of a world-beast. This project is a journey through future animism, storytelling, extra-human relationships and Slow Thinking.

I’m thinking about something.
Slow Thinking is a myth.

These are the opening lines of a poem which came out of the hive mind process of creating Supreme. Slow Thinking seems to be a potential link between a collection of texts from our collaborators and the discussions we had during the conception of the work.

I’ll start by saying that this is a very fluid idea which is ever evolving with each new conversation. It is also not something new. I am using this as a way to delve into already established concepts such as Deep Time, Deep Listening and Generational Thinking. All of these topics are explored in depth by thinkers such as Robin Wall Kimmerer, Anna Tsing, Robert Macfarlane and Vinciane Despret, as well as organisations such as The Long Time Project, to name but a few.

These are just the humble thoughts of an artist building playful worlds.

The root of this idea lies in a practice of thinking at the speed of a forest, a mycorrhizal network or plate tectonics.

The Himalayas were born of the collision of two continents around 40 to 50 million years ago. They grew up through a turbulent adolescence to become the sublime mega-entities which we know today. They were already well into old age when they witnessed the arrival of the first Homo sapiens a mere 200,000 years ago. As their life goes on, they continue to weather the effects of time and entropy, just like every living entity. Finally, when their time comes, they will disintegrate back to dust.

The lifecycle of mountains is laid out beautifully in the short film «The Weight of Mountains» by filmmaker Temujin Doran.

It is unlikely that humanity will outlive these hyper-object entities. They are eternal gods. Titans of the aeons who have travelled through deep time and witnessed the interdependent world in all its flux. These mountains are our elders – what can we learn from thinking at their speed? How can we synchronise with their slow mode of existence?

In the sci-fi fantasy series Broken Earth, N.K. Jemisin tells the story of Essun. Essun is an orogene: a human who can manipulate earth and stone. She can calm earthquakes but also cause devastation. Orogenes control earth by harnessing and redirecting kinetic energy. A similar relationship to earth and tectonics can be seen in the earthbenders of the anime series Avatar.

In both stories, humans are able to alter the kinetics of rock to reach velocities of human perception. Their relationship is one of control rather than collaboration. However, as an orogene or an earthbender delves deeper into their practice, an intrinsic connection to deep time reveals itself. In Broken Earth, certain of the most gifted orogenes are eventually reborn as stone eaters: immortal humanoid beings made of rock who appear to move either with preternatural slowness or superhuman speed. In Avatar, the elder earthbender Bumi is a patient man of 112 years – as he teaches Aang in the episode Return to Omashu, the key to earthbending “involves listening and waiting”.

Listening and waiting sounds a lot like the exercises outlined by Pauline Oliveros in her practice of Deep Listening. Oliveros describes the practice as “learning to expand the perception of sounds to include the whole space/time continuum of sound” and she asserts that “Such expansion means that one is connected to the whole of the environment and beyond.”

Maybe Slow Thinking is Deep Listening for the world beyond sound.

Maybe Slow Thinking is learning to expand perceptions of time.

In David Attenborough’s recent series Green Planet, the filmmakers use a new technique of motion controlled timelapse camera rigs to bring the plants to life on screen. According to cameraman Tim Shepard the team had to learn how to read the plants and anticipate their movements for the shoot. They had to think like a plant and synchronise their rigs accordingly.

What we see when watching the series is an accelerated representation of plant-time. The story is edited to a speed which we can more easily perceive. Despite this mediation, the series offers us a compelling educational glimpse into the slow world of plants.

In recent years, there has been a lot of interest in fungi and mycorrhizal networks, with a tendency to compare the transfer and sharing of nutrients and minerals to data on the internet. Data is knowledge, and it is humbling to think of a forest as a hub of knowledge exchange between thousands of interconnected nodes.

Robert Macfarlane dedicates a chapter of his book Underland to rooting around the “Wood Wide Web”. He points out that the “relationship between mycorrhizal fungi and the plants they connect is ancient – around 450 million years old – and largely one of mutualism”. He defines mutualism as “a subset of symbiosis in which there exists between organisms a prolonged relationship that is interdependent and reciprocally beneficial.”

Slow Thinking hopes to take this idea of mutualism and apply it to empathetic relationships with the other entities of the shared world.

Slow Thinking is about empathy through time. It crosses generations and aeons.

In her 2012 essay Hydrofeminism: Or, On Becoming a Body of Water, Astrida Neimanis dives into the idea that all terrestrial entities are part of one global body of water – the Hypersea. “As watery, we experience ourselves less as isolated entities, and more as oceanic eddies,” writes Neimanis, “…I am a singular, dynamic whorl dissolving in a complex, fluid circulation.”

We are the conscious bodies in an inter-generational global modular-organism, linked by the Hypersea.

There are moments when the temporal modes of Slow Thinking entities are fleetingly synchronised with the speed of human perception. These are the ecotones of temporal consciousness. Rifts in the fault lines of perception.

Maybe there is something to be learned from these events?

Volcanic eruptions are the instantaneous snapshots of aeons of slow-moving plate tectonics. They are destructive moments which demand fear and respect from all fast-paced critters nearby. They have the effect of drastically altering the surrounding landscape and even the climate with far-reaching effects. Similarly, the growth of mushrooms could be seen as a moment where the Slow Thoughts of mycelial fungi become perceivable to humans. We often benefit from this in the form of food and economy. In other cases, in the form of hallucinogens which can alter perception itself and evoke different planes of existence.

In The Mushroom at the End of The World, Anna Tsing learns from one of these rifts by following the matsutake mushroom to trace the possibility of life in the ruins of capitalism.

When is this World’s end where the matsutake flourishes?

Are we already in the ruins?

Throughout his work, Federico Campagna understands a world as “an artificial construct of the imagination.” Whilst we might be living through the swansong of this particular story, Campagna asks how we can help the creation of new worlds out of the ruins of our own.

Can we be the archaics of a new cosmological world, full of childish optimism, but this time with the tools to realise utopian modes of living?

Can we flourish in the detritus?

As alluded to earlier, Slow Thinking is wrapped up in temporal empathy.

It seems to me that the best way for humans to begin thinking in these ways is by thinking generationally, with an inter-species scope. We can (re-)learn these philosophies of thought from indigenous communities such as the Haudenosaunee, who make societal decisions based on the Seven Generation Principle.

Through these and other similar principles, Slow Thinking hopes to reconnect us to generations and aeons, futures and pasts, to the humans, xeno-humans and non-humans with which we inter-depend for life. To promote a long-time culture of care.

So the next time you eat a mushroom, slow down, think about it: you’re connecting with the passing thought of a conscious hyper-object forest entity – your sibling – another interdependent body in the global modular-organism. 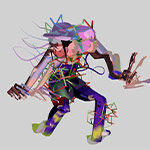 Artist and musician and, together with Marija Avramovic, one half of the multidisciplinary artistic duo Xenoangel.