They are stage directors and they are also anthropologists, documentarians, social researchers, communicators, political scientists, robotics engineers, etc. It has been 20 years since Helgard Haug, Stefan Kaegi and Daniel Wetzel founded Rimini Protokoll in Berlin, and they have created around a hundred shows that have led theatre to break the barriers of conventional venues.

If there is one theatre company in Europe that is in good shape for tackling the immediate future, that company is Rimini Protokoll. For various reasons. Right in the middle of lockdown, with all of Europe’s performing arts closed down and barred, I asked Swiss director Milo Rau what the main problem is for theatre in current times and his answer was clear and direct: architecture, still using buildings from the 19th century. Rimini Protokoll took theatre out of these buildings years ago – with works that are walks, radio pieces, immersive, etc. –, without renouncing them.

“Most theatres were built”, Kaegi affirms, “so that people could be as joined together as possible, with ideal lines of vision and with potential evacuation routes closed. These buildings have a problem. They are interesting in themselves for theatre, as are football fields or airports, which could become spaces for performance”. During lockdown, for example, they set up a tour around the Vidy-Lausanne theatre (Boîte noire), a play via videoconference with workers from call centres in India (Call Cutta at Home) and another (1000 Scores. Pieces for Here, Now & Later) which enables each spectator to craft their own play at home. Nothing is totally new in their career.

Wetzel asserts that when they started, at the turn of the millennium, they had in common “a general notion of theatre: a very old medium, with buildings that determine the type of theatre that can be done, which exclude for example, the relationship between the audience and the stage”, something which did not happen previously, for example with the Spanish open-air courtyard theatres (corrales de comedia) or the playhouses of English Elizabethan theatre, where shows were presented in the open air. They wanted to open new routes, break with the established parameters, put to one side the theatre of the Enlightenment, very closely linked to royalty, and bring it closer to other models, such as the parliamentary or the judicial models, events that are also culturally comprehensible. They wanted to modify the operating system, liberate it, make it more open source, as if it were a computer program, to offer new definitions to theatre.

They never speak about art, Wetzel clarifies, when referring to their work, but, although they often walk around its margins, the term theatre is good enough for them. But with an adjective: post-dramatic. Above all because of the word post, since its other meaning (mail) enables them to create “fruitful misunderstandings and shifts”. “Post-dramatic that introduces a lot of playful dealing with our cultural heritage”, he adds, laughing. Theatre, therefore, they simply like because, they say, it is related with everyday life and everyone knows what they want to say. Nonetheless, they have always attempted to perform in spaces that are in an architectural context… “A large part of our work is related with the use of time in a conscious way. It is not a case of putting a video in a museum where the people come and go, in doing something hermetic. We believe in sculpting something that is an act of communication”, says Kaegi.

This is why the format of their works are so diverse. Above all because what determines them is the theme, what they want to talk about. It is no surprise, therefore, that many of their plays have leading characters who are normal citizens, who are not professional actors. They have worked with people of all kinds, from African immigrants packed in a truck (Cargo Congo) to grandchildren of the Cuban Revolution (Granma), Tourette’s patients (Chinchilla Arsehole, eyey), an android with the personality of writer Thomas Melle (Uncanny Valley), Volkswagen workers from all over the world (Volksrepublik Volkswagen), people who are about to die (Nachlass-Pièces sans personnes)…  Across the five continents.

“A lot of our work”, Kaegi recalls, “has to do with reality transfer to the stage. There are different ways of doing this. We can try to prepare reality in such a way that it survives the stage or, it gets even stronger on stage, in the form of people who would never end up onstage”. Or they can bring the audience to a place where the reality is so visible or the relevancy of this excerpt of reality is very important, like a shareholders’ meeting. Haug asserts that they choose people who will participate in their shows based on their knowledge or their experience because they believe that “it is interesting to look through their eyes”. Wetzel adds: “When an actor performs a part, you are bouncing between the what and the how, and at the same time you reflect on your experience and the interpretation…” In contrast, if you don’t have actors, the people with whom you work “are not pretending to be somebody but trying to bring across that they are somebody”. For them, who flee like the plague from being pigeonholed in “documentary theatre” so in fashion these days in Europe, theatre is like a mirror of how we live. And they exploit it to the maximum, multiplying the lines of vision. “When the mirror tells you how the world should be it is propaganda”, Wetzel alerts. For that reason, they always look to situate themselves on the same level as the spectator: “There is not such a big difference between us and the audience”, indicates Wetzel. During the research process, they find things that they want to transmit and they never expose the audience anything unless they have tested it beforehand. “Does the work function by itself or does it have social parameters?”, he asks.

Perhaps the key that means that, 20 years later, Rimini Protokoll is still a reality, is each of them having been capable of carrying diverse rucksacks and setting out from one same point: time, “sculpt time”, as Kaegi calls it. And they do it with all kinds of resources, but always with the idea of “organising the being together of people”. For this German company, the audience is not anonymous. “It is not in a dark room like there might be at a theatre, where the light goes off in the audience so that we see the stars shine on the stage… Light comes up on some people that you don’t expect to be actors normally and then light suddenly comes up on you… you came actually to be a spectator, and then for a certain moment you become the protagonist of events for another part of the audience. We get a lot of pleasure from giving roles to everybody that is part of the experiment”, Kaegi points out.

“Maybe the term audience is wrong,” clarifies Haug, “they are sort of like partners for a project. And we take them very seriously as guests, as collaborators. There is no show without an audience. Sometimes they have to interact a lot, sometimes the performers are not there anymore, but there are documents and you have to slip into the shoes of the protagonists and sometimes it’s about this thin line of how you look at somebody.” Will what they prepare for the CCCB be like this? Will there be a bit of all this and will it resemble a ‘site-specific’ installation, i.e. one that reproduces reality on a life-sized scale of 1:1? “It will be like a model”, says Wetzel, who does not hide the passion that all three of them feel for reproductions.

Unexpected surprises are part of the genetic make-up of Rimini Protokoll. Part of their attraction lies in this, in being capable of surprising spectators. First of all, by putting before them characters and themes that, despite forming part of their everyday lives, have washed over them. And secondly, inventing formats that not only have demolished theatrical but also personal walls. They even want the people that collaborate with them, their partners, Kaegi affirms, “to look at what they are not used to looking at, so that new ideas emerge”. And he adds: “It is not just a case of telling a story, or making a film while you are explaining this story, but we reorganised their lives so that they invent a new way of explaining the story from this particular format. 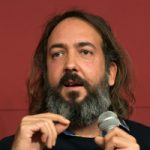 Writer and journalist specialising in the performing arts.

The Evolution of the Concept of Audience (V)

The jury of the 2014-2015 Cultural Innovation International Prize talk about the evolution of the audiences.

The Evolution of the Concept of Audience (IV)

Different experts talk about the audiences that tend to be ignored or overlooked, and try to imagine or predict how audience/s will evolve in the coming years.