Technicians installing flaps and wiring on a flying-boat model. NASA, 1946 | NASA on The Commons | No known copyright restrictions

This manifesto marks the first anniversary of a project, Reconstrained Design, launched explicitly to challenge the state of design: its narrowing pathways, prevailing assumptions, and corporate agendas. Our manifesto takes the form of a preamble which outlines the history of the manifesto genre and its origins in the historical avant-garde of a century ago, followed by a list of twelve tenets that put forward specific design challenges, each based on or challenging a thought-provoking quotation. With this text we aim to pry open new discursive and imaginative spaces, to force new ideas into the public view, to promote engagement with politics, technology and other facets of everyday life, and to upset the status quo of design thinking.

How to write a manifesto? According to F. T. Marinetti, the leader of Italian Futurism and arguably the greatest (and most prolific) manifesto writer of all time, the key ingredients of any manifesto are “violence and precision” [1]. Manifestos must take no prisoners, they must be bold and direct like the advertisements they imitate. From “The Founding and Manifesto of Futurism” in 1909 to the “Manifesto of Futurist Cuisine” in 1930, Marinetti and his comrades wrote hundreds of manifestos across all subjects [2]. The problem with the Futurists was that, if anything, they believed too much in the future. As Marinetti himself put it: “Contrary to established practice, we Futurists disregard the example and cautiousness of tradition so that, at all costs, we can invent something new, even though it may be judged by all as madness.” [3]

This single-mindedness is what made the Futurists exciting, but in our view it was also their greatest weakness. They lacked any critical distance, to the point that they became cheerleaders not only for progressive causes like Suffragism but also for Fascism, war, industrial waste, library closures, and other downsides of modernity. Their Vorticist rivals in London, led by Wyndham Lewis and Ezra Pound, mocked this reverent attitude to technology. They called it “automobilism”, after the leading technology of the pre-war era: “AUTOMOBILISM (Marinetteism) bores us. We don’t want to go about making a hullabaloo about motor cars, any more than about knives and forks, elephants or gas-pipes. Elephants are VERY BIG. Motor cars go quickly.” [4]

Also wary of technology and progress were the Dadaists, led by another prolific manifesto writer, Tristan Tzara. Operating during the carnage of the First World War, Dada came out as “definitely against the Future”, even calling for the “abolition of the future”. Tzara brought an ironic and self-critical gaze to the manifesto’s masculinist posturing, so that while the 1918 manifesto begins with a Marinettian definition: “To put out a manifesto you must want: ABC to fulminate against 1, 2, 3 to fly into a rage and sharpen your wings to conquer and disseminate little abcs and big abcs, to sign, shout, swear, to organize prose into a form of absolute and irrefutable evidence”, it proceeds to tear apart its own platform: “I write a manifesto and I want nothing … and in principle I am against manifestos, as I am also against principles” [5]. The Dadaists felt that all strongly-held beliefs were suspect. For them, all the old virtues were bled of meaning by the meaningless carnage of the First World War. We saw that somewhere in the middle of these two extremes was the perfect manifesto: at once direct and assertive, critical and self-aware, not taking itself or the future too seriously while being, beneath it all, deadly serious. That is what our provocation aims for: a manifesto that is neither too dogmatic nor too ironic. The world has enough of both. “We must shift America from a needs, to a desires culture, people must be trained to desire, to want new things even before the old had been entirely consumed. We must shape a new mentality in America. Man’s desires must overshadow his needs.” Paul Mazur (Harvard Business Review, 1927) [6]

Challenge #2: Reclaim the means – stop obsessing with the ends

“Modern anthropology … opposes the utilitarian assumption that the primitive chants as he sows seed because he believes that otherwise it will not grow, the assumption that his economic goal is primary, and his other activities are instrumental to it. The planting and the cultivating are no less important than the finished product. Life is not conceived as a linear progression directed to, and justified by, the achievement of a series of goals; it is a cycle in which ends cannot be isolated, one which cannot be dissected into a series of ends and means.” John Carroll [7]

“[W]hen it becomes automatic (on the other hand) its function is fulfilled, certainly, but it is also hermetically sealed. Automatism amounts to a closing-off, to a sort of functional self-sufficiency which exiles man to the irresponsibility of a mere spectator.” Jean Baudrillard [8]

Challenge #4: Bring an end to this vacuous celebrity designer BS

“My juicer is not meant to squeeze lemons; it is meant to start conversations.” Philippe Starck [9]

“All inventions and innovations, by definition, represent an advance in the art beyond existing base lines. Yet, most advances, particularly in retrospect, appear essentially incremental, evolutionary. If nature makes no sudden leaps, neither it would appear does technology.” Robert Heilbroner [10]

Challenge #6: Rather than feed the illusion of invincibility, work from the reality of uncertainty and transience

“Everywhere gold glimmered in the half-light, transforming this derelict casino into a magical cavern from the Arabian Nights tales. But it held a deeper meaning for me, the sense that reality itself was a stage set that could be dismantled at any moment, and that no matter how magnificent anything appeared, it could be swept aside into the debris of the past.” J. G. Ballard [11] Challenge #7: Set aside the easier work of armchair critique and take up the more difficult work of proposing viable alternatives

“It is true that I can better tell you what we don’t do than what we do do.” William Morris [12]

Challenge #8: Ask yourself (before putting things in the world): Am I prepared to play God?

“It’s not right to play God with masses of people. To be God you have to know what you’re doing. And to do any good at all, just believing you’re right and your motives are good isn’t enough.” Ursula K. Le Guin [13]

“One merges into another, groups melt into ecological groups until the time when what we know as life meets and enters what we think of as non-life: barnacle and rock, rock and earth, earth and tree, tree and rain and air. And the units nestle into the whole and are inseparable from it … all things are one thing and one thing is all things – plankton, a shimmering phosphorescence on the sea and the spinning planets and an expanding universe, all bound together by the elastic string of time. It is advisable to look from the tide pool to the stars and then back to the tide pool again.” John Steinbeck [14]

“True progress lies in the direction of decentralization, both territorial and functional, in the development of the spirit of local and personal initiative, and of free federation from the simple to the compound, in lieu of the present hierarchy from the centre to the periphery.” Petr Kropotkin [15]

Challenge #11: Be patient for the quiet days

“Another world is not only possible, she is on her way. On a quiet day, I can hear her breathing.” Arundhati Roy [16]

Challenge #12: Start building the future you want, with or without technology

“People ask me to predict the future, when all I want to do is prevent it. Better yet, build it. Predicting the future is much too easy, anyway. You look at the people around you, the street you stand on, the visible air you breathe, and predict more of the same. To hell with more. I want better.” Ray Bradbury [17] 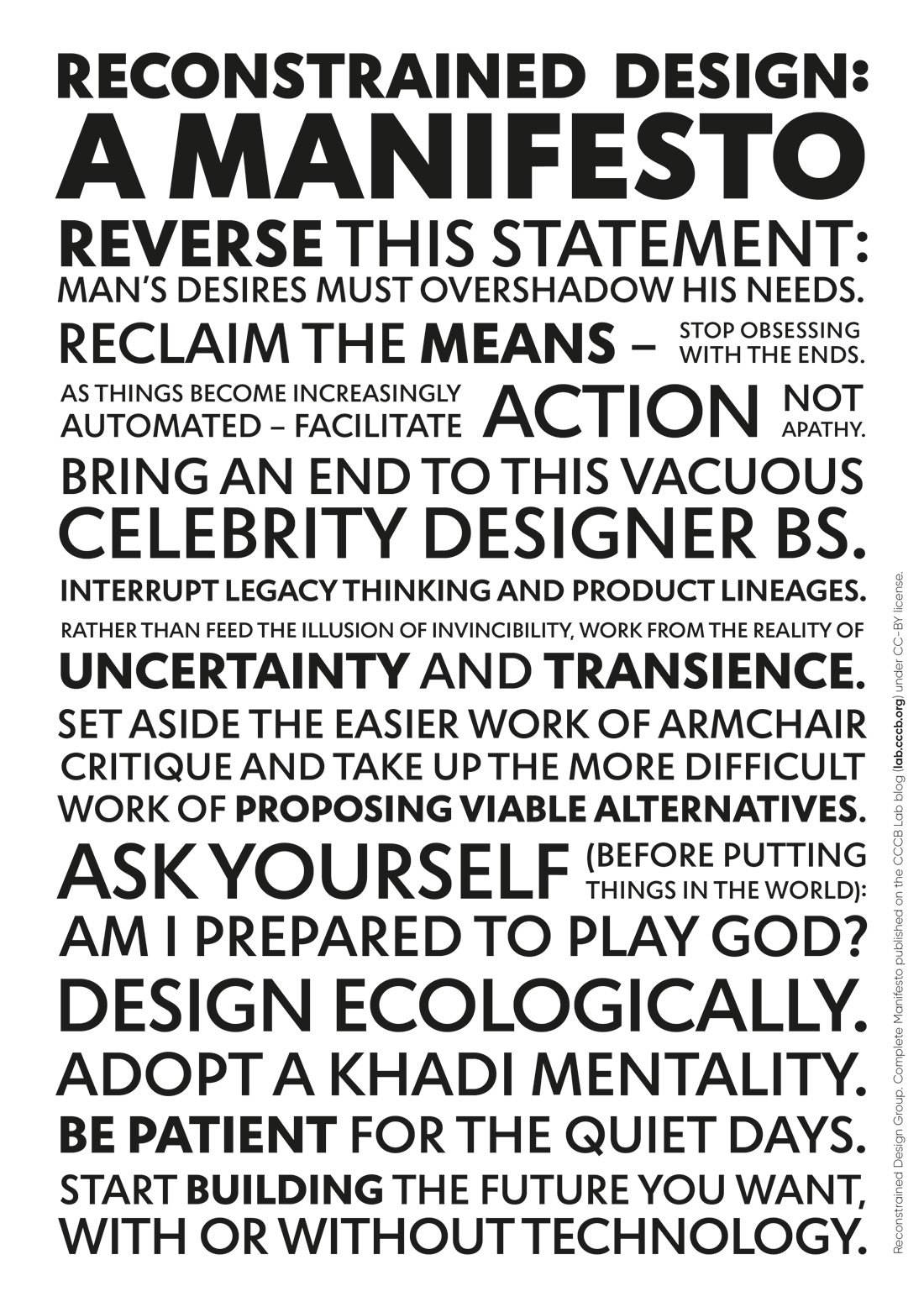 A group formed in 2017 at the Madeira Interactive Technologies Institute (M-ITI) with the explicit aim of reconsidering the idea of design.

Towards a New Design Atlas

Social and industrial changes in recent decades are urging a reconsideration of design typologies, with a re-reading for the current era.