What is Ars Magna? What was the reach of Ramon Llull’s logical-conceptual system? What language did it speak? What world could be created on that basis? What impact has it had on modern logical systems? What do Siegfried Zielinski and Peter Weibel mean when they say that the thought in network championed by Ramon Llull has had its influence in the conception of the new media?

The road that leads from Ramon Llull to Alan Turing is long, complicated and replete with projections conditioned by the world view of our own times. However, although not all Ramon Llull scholars see the philosopher as a precursor of computer science, many of them do tend to agree in considering Ars Magna—the work, finished in 1308, which Llull presented in several phases and simplified versions—as a mainstay of combinatorial reasoning and network thinking.

And some may ask, what is Ars Magna? At the material level it consisted of figures, some of them rotating discs, the “Llullian circle”, which could be made of, and cut out from paper and then used to develop a whole series of arguments in order to confirm or refute an original proposition. At the conceptual level, this was a logical system which, for the philosopher, had several purposes: understanding reality as a whole without leaving behind any element to situate in the complex maze of the world and thus being able to apprehend everything; overcoming the barriers of language in order to corroborate or rebut arguments put forth in the theological, scientific and humanistic debates of his times. With this logical method Ramon Llull also wished—and this is the theme of the opening debate—to keep on constructing complex sentences connecting concepts. But to what extent was that possible?

According to the Hellenist Raül Garrigasait, Ramon Llull knew that Art in itself could not generate any discourse, that the application of Art always requires a human imagination (and a literary imagination if the aim is to create literature). Art was a technique with which he could engage in logical-combinatory operations using concepts but this never enabled him to create complex dramatic situations. It leaves no space for implicit content, rhetorical figures, word-borne memory, and the complicity of mental universes in contact. In Art there is no place for the elements which make it possible to go beyond the letter and create symbolic spaces so that, with the help of the reader, the unexpected will occur. However excellent a method of formalisation and mechanisation may be, it will always need human imagination.

The German media theorist Siegfried Zielinski highlights one aspect of Llull’s Art: he reminds us that, for Llull, there is a total connection between reality and the word; a correspondence between the structure of the world and thinking, which we must imagine as a kind of network through which we can move. According to Zielinski, who is greatly influenced by the vast bibliography of Amador Vega, Art has a characteristic that turns it into a unique method: the ability to capture, at the same time, the static features of reality and to project its dynamic aspects. This is why, he says, studying it and thinking about it gives us a multimedia sensation.

Peter Weibel, conceptual artist and chairman of the prestigious ZKM Center for Art and Media Karlsruhe, has also devoted studies to following the trail of Ars Magna in logical-mathematical systems which came after Llull. And he is in no doubt about it: Llull’s intuition—according to which ideas can be translated into formal language, and any formal language can be mechanised—is revolutionary. Hence, anticipating Alan Turing’s theory more than six centuries before it appeared, Llull became one of the founders of the algorithm and the digital revolution. 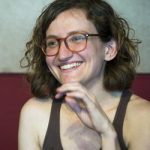 Journalist, philosopher, translator and essay critic. She received a grant from the Joan Maragall Foundation to write her thesis “The social and political thinking of Joan Maragall”.