“Because words today are cheap and infinitely produced, they are detritus, signifying little, meaning less.” In Uncreative Writing. Managing Language in the Digital Age, UbuWeb founder Kenneth Goldsmith argues that globalisation and digitalisation turns all language into provisional language. The volume of text available and the ease with which it can be modified or manipulated poses a new challenge for writers today, making it necessary to rethink traditional notions of “originality”, “writing”, and “authorship”. Courtesy of Caja Negra Editora, publishers of the Spanish version of the book, we present an excerpt in which Goldsmith riffs on the concept of provisional language.

Language has become a provisional space, temporary and debased, mere material to be shoveled, reshaped, hoarded and molded into whatever form is convenient, only to be discarded just as quickly. Because words today are cheap and infinitely produced, they are detritus, signifying little, meaning less. Disorientation by replication, mirroring, and spam is the norm. Any notion of the authentic or original is untraceable. French theorists who anticipated the destabilizing of language could never have foreseen the extent that these words refuse to stand still; restlessness is all they know. Words today are bubbles, shape shifters, empty signifiers, floating on the invisibility of the network, that great leveler of language, from which we greedily and indiscriminately siphon, stuffing hard drives only to replace them with bigger and cheaper ones. Digital text is the body-double of print, the ghost in the machine. The ghost has become more useful than the real; if we can’t download it, it doesn’t exist. Words are additive, they pile up endlessly, become undifferentiated, shattered into shards now, words reform into language-constellations later, only to be blown apart once more.

The blizzard of language is amnesia-inducing; these are not words to be remembered. Stasis is the new movement. A simultaneous condition of ubiquitous obsolescence and presence, dynamic yet stable. An ecosystem: recyclable, repurposed, reclaimed. Regurgitation is the new uncreativity; instead of creation, we honor, cherish and embrace manipulation and repurposing. Letters are undifferentiated building blocks — with no one meaning more or less than another; vowels and consonants are reduced to decimal code, temporarily constellating into a word processing document; then a video; then an image; perhaps back to text. Both irregularity and uniqueness are provisionally constructed from identical textual elements. Instead of trying to wrest order from chaos, the picturesque now is wrested from the homogenized, the singular liberated from the standardized. All materialization is conditional: cut, pasted, skimmed, forwarded, spammed.

Where once the craft of writing suggested the coming together — possibly forever — of words and thoughts, it is now a transient coupling, waiting to be undone; a temporary embrace with a high probability of separation. The industrialization of language: because it is so intensely consumed, words are fanatically produced and just as fervently maintained and stored. Words never sleep; torrents and spiders are hoovering language 24-7.

Traditionally, typology implies demarcation, the definition of a singular model that excludes other arrangements. Provisional language represents a reverse typology of cumulative, less about kind than about quantity.

Language is draining and is drained in return; writing has become a space of collision, a container of atoms.

There is a special way of wandering the web, at the same time aimless and purposeful. Where once narrative promised to deliver you to where you wanted to be, the web’s blizzard of language now obfuscates and entangles you in a thicket of words that forces you past unwanted detours, turns you back when you’re lost: a dérive on overdrive, a fast flâneur.

Language has been leveled to a mode of sameness, blandness. Can the bland be differentiated? The featureless be exaggerated? Through length? amplification? variation? repetition? Would it make a difference? Words exist to for the purpose of détournément: take the most hateful language you can find and neuter it; take the sweetest and make it ugly.

Restore, rearrange, reassemble, revamp, renovate, revise, recover, redesign, return, redo: verbs that start with re- produce provisional language. Half of mankind pollutes to produce, the other pollutes to consume. The combined pollution of all Third World cars, motorbikes, trucks, buses, sweatshops, pales into insignificance compared to the heat generated by digital language. Entire authorial oeuvres now adopt provisional langauge, establishing regimes of engineered disorentation to instigate a politics of systematic disarray. Babel has been misunderstood; language is not the problem, just the new frontier.

Provisional language pretends to unite, but it actually splinters. It creates communities not of shared interest or of free association, but of identical statistics and unavoidable demographics, an opportunistic weave of vested interests.

The office is the next frontier of writing. Now that you can work at home, the office aspires to the domestic. Provisional writing features the office as the urban home: desks become sculptures; an electronic Post-It universe imbues the new writing, adopting corporate-speak as its lingo: “team memory” and “information management.”

Contemporary writing requires the expertise of a secretary crossed with the attitude of a pirate: replicating, organizing, mirroring, archiving, and reprinting, along with a more clandestine proclivity for bootlegging, plundering, hoarding, and file-sharing. We’ve needed to acquire a whole new skill set: we’ve become master typists, exacting cut-and-pasters, and OCR demons. There’s nothing we love more than transcription; we find few things more satisfying than collation.

There is no museum or bookstore in the world better than our local Staples, crammed with raw writing materials: gigantic hard drives, spindles of blank discs, toners & inks, memory-jammed printers and reams of cheap paper. The writer is now producer, publisher and distributor. Paragraphs are ripped, burned, copied, printed, bound, zapped and beamed simultaneously. The traditional writer’s solitary lair is transformed into a socially networked alchemical laboratory, dedicated to the brute physicality of textual transference. The sensuality of copying gigabytes from one drive to another: the whirr of the drive, the churn of intellectual matter manifested as sound. The carnal excitement from supercomputing heat generated in the service of literature. The grind of the scanner as it peels language off the page, thawing it, liberating it. Language in play. Language out of play. Language frozen. Language melted.

Our task is to simply mind the machines.

Globalization turns all language into provisional language. The ubiquity of English: now that we all speak it, nobody remembers its use. The collective bastardization of English is our most impressive achievement; we have broken its back with ignorance, accent, slang, jargon, tourism and multitasking. We can make it say anything we want, like a speech dummy.

Narrative reflexes that have enabled us from the beginning of time to connect dots, fill in blanks, are now turned against us. We cannot stop noticing: no sequence too absurd, trivial, meaningless, insulting, we helplessly register, provide sense, squeeze meaning, and read intention out of the most atomized of words. Modernism showed that we cannot stop making sense out of the utterly senseless. The only legitimate discourse is loss; we used to renew what was depleted, now we try to resurrect what is gone. 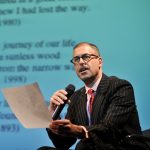 Poet and artist, publisher and founder of the online archive UbuWeb and PennSound.

Move a Text, Break Up the House