Videograms of a Revolution (Harun Farocki and Andrej Ujica, 1992).

Forms change when they change speed. In the demonstrations by the 15-M movement, the contrast between the traditional news media (printed press and television) and the digital media used by the participants in the protests generates a temporal friction: suddenly, the media used by the powers that be are inefficient and even obsolete, slow to react and incapable of suffocating the counter-information generated via digital videos that were uploaded and immediately went viral across the Internet, as shown in the disturbances caused by police intervention in the Plaça de Catalunya, in Barcelona, on 27 May 2011.

In contrast with the controlled broadcasting of information in television news programmes, these unplanned videos surge forth at a different speed due to an immediacy in the production and dissemination of such audiovisual materials that the spectator identifies as a more live, direct, urgent reaction; the traditional media of the powers that be, still aligned with the habits of the pre-digital era, cannot react in synchrony and, in the gap caused by that delay, it seems clear that there may be some effects of their manipulation. Why wait, in that case, for the news programme? The crisis of the traditional media is due, in part, to the fact that their ideological resources continue to depend to a large extent on the speed for which they were created.

Television, for example, has tried to control or repress as far as possible the radical aspect of live broadcasting by rehearsing – in the recording studios – the most efficient methods for ordering and planning programmes, trying to eliminate any possible risk or chaos, or the unforeseen cropping up. In this sense, some light may be shed on the subject by political analysis of the film by Harun Farocki and Andrej Ujica Videograms of a Revolution (1992), where it shows the moment in which Ceaucescu’s regime is overthrown, but no new regime has taken over, so the television communicates or broadcasts from the interval, the break or uncertainty regarding the most suitable or convenient ideological forms. When the people take over the state channel, and in the midst of a complete – or apparent – lack of technical control, what starts to be broadcast above all is surplus material: shots off centre, bumps, jumps, grainy or snowy images, disconnections, interruptions. That was the “live” image of a revolution, of the transition from one political system to another; that raw – or uncooked – interval has traditionally been the great key of politics in the cinema, knowing how to situate oneself between systems.

Moreover, these kinds of off-centre images, exiled from traditional television, form part precisely of the digital images that are being created on the websites, also at a previously unseen or non-customary speed. In that movement, the hierarchies or controls of dissemination via cinemas and museums on what is valuable or worthy of exhibition also end up subverted: websites such as Ubu and Prelinger allow people to see or get hold of materials that until now were very difficult to access (advertising films, artist films, sub-productions, books, documents, etc.). The idea of a history of the cinema or of art without signatures – also in detriment of the author’s rights – becomes materially more reasonable, due to the possibility through editing to associate a canonical film and an industrial documentary and see what appears in that collision. Politics also passes through that production, that friction.

The main commercial and promotional objectives of the Internet force a multitude of windows that hinder ideological control of the transit of the videos: when attempts are made to erase one, it simply reappears with another name or on another website. These are the Internet’s blank, empty, interstitial spaces or openings. The same thing happens with piracy and the costly and fruitless attempts to stamp it out. What is important about these changes is the knowledge of how to introduce some degree of chaos. In the interior of each system one also finds the creation of its vulnerability or fault line.

All political power, whatever its ideological condition, instates a formal system (in communication, in customs, in laws, in fashions) whose survival is rooted in the persuasive and propagandistic strength of its collective propagation and the difficulty involved in changing it individually. That power is exercised above all through technical tools developed with economic and control objectives.

Already back in the 1920s, Paul Valéry was warning that cultural changes belong to science and technology, and not to the poets as is usually believed. At the present stage, it seems clear that the iPhone and other screens invented by Steve Jobs have transformed forms of expressing love much more than any Hollywood screenwriter.

For this reason, before the proliferation of screens designed to quantify or multiply with greater ease habits or images of consumerism, all work and thought that is aesthetical, political, or goes against the powers that be, must influence the development of technical instruments to give them other angles and uses, perhaps not functional, excessive or unforeseen. Politics in this respect must not be virtual or abstract, but materialist and starting from below, from the object (the keys on the keyboard, the camera): from valuation and awareness-raising regarding what is disdained, considered unworthy or cheap. Poetry, painting and cinema do this work of amplifying the ways of seeing or speaking.

It is important to remember, at this point, that cinema originated far from the Academy and the forms legitimated by high culture, through popular genres such as the burlesque, and that recovering part of that wild character is an urgent task, as cinema has spent decades subjected to jargon and academicism. That was also the fighting front of the Dizga Vertov Group in the post-’68 era (and their famous motto “to make political films politically”, which implied undoing what was considered well done or – by militant filmmakers – well thought) or of the anti-colonialism of Glauber Rocha (extending the possibilities of direct sound and ideological discourse to the shout or howl or noise – equivalent to the sound of the grainy image).

The videos that have been uploaded featuring the different revolts by young people are not so much interesting as singular works, or much less finished works, but rather because they are integrated into a collective and anonymous network or archive that is full of all the permutations and critical set-ups possible. In this phenomenon, salient points are the manageability of the image and the sense of protest assigned to it, the liveliness of the circulation of images and sounds. By freeing itself from collective and industrial mechanisms, the video is used as a direct and spontaneous expression, a reaction. Perhaps mobile telephone cameras are the most symptomatic tool of this process.

The majority of teenagers who have felt some artistic concern have opted traditionally for writing poems. In contrast, these days one more frequently sees young people choosing video – now converted into a domestic tool – rather than literature for showing their experiences. In that choice, the appearance of mobile telephones with integrated video cameras proposes an everyday and immature writing, simultaneously with a development of the diary on video, self-portraits and other previously peripheral forms.

The mobile phone is not a medium for emulating the conventional modes of producing films, but for investigating other modes, and freeing oneself of straitjackets and legitimations, avoiding long waits and paperwork in order to get money. These cameras allow for an immediate adjustment between the experiences as they are lived – even before they are understood – and their recording. Upon freeing themselves of the pretension of immediately constituting a work, perhaps these shots also create new narratives and recover the vision in which forms are in vibration.

The political alternative would be rooted in the fact that videos on mobile phones (and other screens) can be destined to a mannerist and mimetic self-absorption – as a toy for tourists or daydreamers – or alternatively show – forcing them to go against the neutral technique of the manual – images that could only have been recorded through that camera, thus making new apparitions of the real emerge in digital processes.

We either all move at the same pace – and with the same image – or the pace has to change. 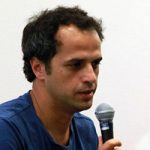 Film lecturer at the Universitat Pompeu Fabra, programmer at Xcèntric and publisher of the magazine Cinema Comparat/ive Cinema.