Based on the Environmental Health Clinic project by Natalie Jeremijenko for the exhibition “After the End of the World”, City Station is a space for citizen action for the environmental improvement of Barcelona. With its headquarters at Passatge Trullàs in the district of Sant Martí, at City Station a series of recipes for environmental improvement are applied through the running of activities and workshops. We visit this citizen science initiative which enjoys the cooperation of over a hundred agents, science centres, schools, neighbourhood groups and diverse organisations to respond collectively to the major challenges aligned with the COP21 targets relating to cities.

In the Lions class they have a mission. These second-year primary pupils have put up a map of Barcelona, which shows the streets of the Eixample that surround their school. “We have put black spots over the addresses of all the children” explains one of them, called Roc. Also, they have reserved some green spots to stick them in the parks and squares that surround their school, CEIP Joan Miró.

These points indicate the spots where 40 sensors will be positioned in order to measure the air quality: places that they habitually travel through. It may seem like child’s play, but this action will enable “scientific evidence to be transferred to public policies”, affirms Carolyn Daher, coordinator of the Barcelona Global Health Institute (ISGlobal) initiative for urban planning, the environment and health. This school is just one of 20, two per district, that will spend a whole day installing up to 800 points to measure the pollution emitted by the city’s vehicles. The sensor is a tube with a cap at each end, one white and the other grey. The grey cap is placed in the upper part and the white cap is removed so that air can enter. Inside, the tube contains a miniscule mesh that absorbs nitrogen dioxide molecules.

The children, with the help of their parents who carry a ladder, position the tubes two and a half meters away from the ground and fasten them securely using cable ties. “For us it is interesting to know what contamination there is around our home, which path we take to go to school and whether there we could take a better route”, comments Laura Molina, mother of Àlex.

This is the first time that so many tubes for measuring air quality have been installed in Barcelona. At present, the data available are very limited. It is as though the photograph of the atmospheric contamination were pixelated. The dispersion of the particles in suspension emitted by the vehicles can vary considerably from one street to another and they can even change notably according to the time of day.

At the end of one month, the parents and their children will collect all the tubes that they have placed in order to take them to the lab. The researchers will validate the data that citizens have collected by comparing them with the seven stations installed around the Catalan capital to improve the spatial resolution of the contamination.

The xAire project is one of the most prominent recipes from City Station, an initiative to improve the environmental health of cities within the framework of the exhibition “After the End of the World”, which can be seen until 1 May at the Centre of Contemporary Culture of Barcelona (CCCB). The people responsible for City Station conceived this activity, which has as its precedent the experience Mapping for Change, a similar initiative carried out in London where citizens also have the opportunity to become more aware of the pollution in the places that they frequent. “The idea is to build a pool of citizen science projects, in line with the aims of the UN conference on climate change”, explains Josep Perelló, curator of City Station. Some of the priority themes are improving air quality, increasing biodiversity and improving soil quality.

Another of the significant recipes consists of adding biochar, a product that is organic and of recycled origin based on biomass transformation, to urban soils to improve them and act as a fertiliser. Thanks to this, the city’s trees and plants can grow more healthily and, in consequence, we can improve the foliar surface of cities and their air quality. The social integration cooperative Idària produces the biochar for this activity, designed by the University of Barcelona’s Faculties of Chemistry and Biology.

The xAire and biochar recipes are two examples of citizen science micro-projects, in which people from different spheres join forces. Their focus shies away from paternalism and do-it-yourself in order to build cooperative projects where all the actors work side by side, explains Amanda Masha-Caminals, director of City Station. All the information is posted online, on the City Station website, where the 21 recipes designed with the collaboration of 30 research groups committed to the environment can be consulted. The City Station headquarters is at Passatge de Trullàs in Poblenou, in the Sant Martí district. Where there was once an empty plot, now stands a meeting space for weaving new relations between the actors from the administration, research, schools, families and neighbours.

The inspiration for City Station came from Beta Station, the area that always closes the route around the Beta line exhibitions held at the CCCB. If you have ever gone to join in a workshop or listen to a talk you will most likely have been there. In the case of “After the End of the World”, artist and engineer Natalie Jeremijenko made it hers and installed the Environmental Health Clinic. At first glance it may seem a place full of junk but this space hides a host of proposals for improving quality of life for people and the rest of beings that live in the city.

The artist is denouncing the relationship of superiority that we as humans have established with nature and proposing to redesign it in search of collaboration and mutual benefit. Jeremijenko understands that environmental problems are the health problems of the surroundings in which we live, and so a solution for them must be found. Outside the walls of the CCCB, citizens are taking the floor and taking on a commitment that leads us towards the next station on the line towards improving the city, that of City Station.

City Station is a co-production by the CCCB and the Barcelona Institute of Culture, the Department of Ecology, Urban Planning and Mobility of Barcelona City Council and the District of Sant Martí. With the collaboration of the Taula Eix Pere IV and the neighbours of Passatge de Trullàs. 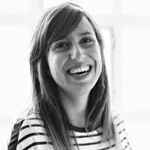 Freelance journalist who specialises in science and health.