Three innovative and controversial exhibition projects: The National Gallery in London invites visitors to ‘hear’ paintings and ‘see’ sound, MASP in Sao Paulo offers a floating journey through ten centuries of painting, and Centro de Arte Conde Duque in Madrid takes us into a dark room inhabited by the work of Hispanic photojournalists. Three shows that rethink traditional ways of exhibiting paintings and photographs in museums.

The National Gallery receives around six million visitors a year and is usually ranked in the top ten most-visited museums in the world. Although its collection of paintings is magnificent, the inconvenience of trying to enjoy it among hordes of tourists makes potential visitors think twice before heading to Trafalgar Square. The museum’s visitor figures appear to confirm that the traditional approach – hanging paintings on a wall – is sufficient to attract audiences, and that nothing else needs to be done. But in fact, the opposite is true. Once a museum has captured an audience’s attention, it has an ideal opportunity to take risks with new formats. As far as strategies go, seducing visitors with new ideas may be better than waiting for them to get bored and stop coming.

Last year, The National Gallery commissioned six artists to create music or sound installations in response to six paintings from its collection. The project’s curator Minna Moore Ede invited each sound artist, composer, or DJ to choose one painting from the museum’s vast collection as a point of departure. Did she ask them to put music to a painting? Not exactly. The aim of the project was to engage curious visitors who are eager for new formats, the kind of audiences who enjoy site-specific theatre projects such as those by Punchdrunk theatre company, which can bring Shakespeare or other classic texts to life on unexpected sites from an abandoned hospital to a shifting stage. The kind of audiences that eagerly await Secret Cinema sessions so that they can dress up in historical costumes to watch period films. How can original experiences of this kind be achieved with painting? Soundscapes was an attempt to address these concerns.


As soon as visitors entered the space, they knew that they were not in for the usual temporary showcase or fresh look at the collection. Soundcapes is an installation. A sensory journey. An experience. Rather than a curator, there seemed to be a stage director behind the project, turning each painting into an actor and each room into a small theatre. It was up to visitors to decide how long to spend with each piece. Each composition had a specific duration, but the works were played in a loop and could be listened to for ten minutes or an hour. As the mood struck. Some rooms provided benches to sit on, others had carpets to lay on. In the last (my favourite), everybody stood up and after a while, almost inadvertently, it was practically impossible not to dance. Better than Sonar. Jamie XX did a fantastic job, starting with his selection of a seascape by little-known Belgian painter Théo Van Rysselberghe. An electronic music producer and DJ, Jamie ZZ realised that there was no point trying to recreate the music we would hypothetically listen to if we were standing on the cliff depicted in the painting. Instead, he interpreted it, made it his own, and changed our experience of it. He played with distances so that the music, like the painting, appeared harmonious from afar, but up close, the impressionist pointillism merged with the electronic beats, literally finding its way into visitors’ nervous systems. A highly rewarding aesthetic pleasure.

Nonetheless, the project received strong criticism from the caustic British press. The Guardian critic wrote that adding soundtracks to paintings was the worst idea The National Gallery had had in years, while The Independent reviewer described it as “painfully unambitious”. It is true that not all the artists were as skilful as Jamie ZZ. Chris Watson, for example, did not take many risks in attempting to add more truth to the Akseli Gallen-Kallela painting he chose, and his field recordings in the countryside are somewhat redundant with the image. Even so, it is rare to contemplate a painting at this level of detail, as the exhibition device almost forces spectators to spend more time with the image. Given the speed at which many visitors walk through conventional exhibitions, simply slowing them down, in itself, affects the aesthetic experience. In the case of the piece by Janet Cardiff i Georges Miller, we could debate whether the 3-D model added anything to the painting, but their sound installation certainly immersed visitors in Antonello da Messina’s St Jerome in his Study. And once the exhibition closed, the music was stowed away in an archive. The National Gallery has expressly prohibited releasing it on CD, given that it was part of a site-specific project made to be “consumed” on the premises.


Italian-born Brazilian architect Lina Bo Bardi’s design for the Museo de Arte de Sao Paulo (MASP) was also site-specific. Since its opening in 1968, MASP became a symbol of modern Brazilian architecture, and its concrete and glass structure was carried over inside the museum, to the mechanism used to display the paintings. A system of clear glass panels allows visitors to take in several paintings at once, and these are superimposed in different combinations depending on the distance and the path taken. The paintings appear to float in space, suspended in midair. Without the protection of the white wall, their materiality is exposed. These glass panels were removed in 1996, and they were not returned to the space they were designed for until a few months ago. The system – which had been controversial from the start, criticised by traditionalist supporters of “church art” – has now been improved: the glass panels have been coated with a film to filter ultraviolet light (the second floor of the MASP is made of glass), steel bars were added to make it easier to secure and change the paintings, and shock absorbers were fitted to dampen the vibrations of the building.

The result of this site-specific exhibition format is a new experience of the paintings. Like the Soundscapes exhibition, it is a way of breaking the prudential distance by which museums usually “protect” their works, and it sets up a dialogue between painters from different periods, allowing an alternative way of engaging with the works. Once again, the paintings capture more of the visitors’ attention, and the aesthetic experience is more satisfying. All exhibitions should be site-specific in some sense.


Another example of an innovative format is Upfront, a photojournalism exhibition held at Centro de Arte Conde Duque in Madrid. Curated by former war correspondent Ramiro Villapadierna, who is now Head of the Instituto Cervantes in Prague, the exhibition was designed “to take an experiential approach, with the aim of reproducing the feelings or situations that journalists regularly experience.” The sound of machinegun fire, as in a Hollywood film, greets visitors who enter a dark room in which the images, suspended from the ceiling, almost literally fall on them. The combination of the soundtrack, the distance markers on the floor, and the mix of images of extreme pain and sorrow and others of guerrilla fighters relaxing, has a disturbing effect. Spectators can feel as if they’ve wondered into an episode of Homeland. Perhaps the mise-en-scène is a little over the top. Too much fiction or aesthetic distance, which may work against the supposed aim of the show, which is to condemn the general indifference to countless injustices around the world.

Questions arise if we consider that these photographs were, in principle, taken to accompany newspaper articles or reports, which are generally read and forgotten as soon as a new stimulus comes along. They were not, in principle, taken to be presented in a museum. As a spectator, it makes me wonder: does a photographer shoot the same way when the resulting image is intended to be published in the press as when it is supposed to hang from the ceiling of a museum? Is it right to make “art” out of suffering and misfortune? Why is digital retouching becoming more common in photojournalism? The curator of Upfront considers it a dramatic, experiential show, but also a tribute to “these professionals who go off to work alone, armed only with the clothes on their backs and their determination, not knowing how or when they will return.” Even so, something does not add up in this search for beauty in the pain of others. Some empathy is lost along the way. It is hard to strike a balance between denunciation and voyeurism. Let the debate begin.

“There are tools with which to make images attractive. But the message is neutralised along the way. Avant-garde art, Adorno’s theories, and so on, taught us to believe that in order to draw attention to the message we had to destroy the ‘beautiful form’, to distort the illusory harmonies that beautiful images suggest. But I think what is happening now is that we are exposed to so many different images, we no longer feel the deviation. In order to be able to have that sense of destruction and deviation, we need a canon or a norm, as a starting point for the distortion and deviation. Instead, we have a design competition. And what is at stake is not so much beauty as seduction.”
Boris Groys 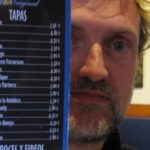