A tandem bicycle frame used by the Germans to generate electricity for wireless in the trenches. Moislains, 1918 | National Library of Scotland | CC BY

The Newton Machine is the winning project of the 2nd Cultural Innovation International Prize. It is an artistic intervention that features the presentation of a prototype for energy storage through the use of the force of gravity and a manual of applications, made with the local community, based on their tools, their replacements parts and their experience. After working on the island of Madeira to develop the prototypes, the Reconstrained Design Group travelled to the island of Eday to build a gravity battery. As a result of the experience we are publishing this diary of the process, which also proposes a reflection on the future of energy.

The energy future is alive on Orkney, a group of islands off the northern coast of Scotland. These remote isles are not peripheral, but on the energy edge. The islanders have adapted to living in a precarious modern world, and turned it into a living laboratory for a climate-changed future. The Reconstrained Design Group came to Eday Island to collaborate on the Newton Machine: an energy battery designed to be made with local people and their place – the islanders and their tools, working with local scrap, drawing on the power in their environment. We learned why an energy future is here, at the edge.

“I’m told, tongue-in-cheek, that when the apocalypse comes, this is the place to be, to survive and thrive, into the future.” (extract from the Eday Newton Machine Instruction Manual.)

I live in the energy future; at least, I do when I am on Orkney, a place I have returned to every year for over decade as an energy ethnographer. When I was thinking of a good place to build a novel energy storage machine, this was the place to come – bringing the Reconstrained Design Group with me. When you live in the future, however, it’s hard to describe it to those living in the present. I shall try…

Where does your electricity come from? On Orkney, over 100% of the electricity is generated from the wind. It blows unceasing from the chilly Canadian coast, and spirals into storms that send the lampposts swinging. Scattered like pale dandelions over the fields, community wind turbines turn a profit for the islands (they sell power to the national grid), and micro wind turbines whirl beside farmhouses. When you put the kettle on, you know that you are also switching on income for your local community.

For our energy storage project, we collaborated with the company that runs the community wind turbine on the island of Eday  – one hundred and thirty people, whose homes stretch out under open skies at the heart of Orkney.

Eday is not just powered by the wind, but also by the sea. As I look out over the ever-folding waves, I can see the distant, yellow thread of the Scotrenewables tide energy generator, the largest in the world. It’s being tested alongside other marine energy prototypes at the European Marine Energy Centre, which has been here since 2003. Together with the community wind turbine, the tide energy is being converted to hydrogen in the unassuming brick substation beside me on the shore.

Storing energy as hydrogen is becoming important because the islands are generating too much electricity and the struggling smart grid is overloading. Aside from the electricity cables almost melting on the poles, the other problem is that the community wind turbines are getting switched off (‘curtailed’) which also cuts off island income. This is an electrified future when the islanders are making too much local renewable energy and must store it for a rainy day.

Standing on the sand and seaweed beach on Eday, the green sea booming, sending white spume into the air, I can see the power in this place. Here, energy is not invisible, not a mysterious force emitted from wall sockets. In this energy future, you know where your electricity comes from. The landscape and seascape are not ‘out there’. You live inside them, in companionship with them. When we visited the primary school, the children drew their own energy storage machines powered by an iconic tide energy generator: as familiar to them as the Sun. When you plug in to the wall, here in the future, you know what you are connecting to; you are familiar with the infrastructure on the other side of the wall – you are kin.

That was why we, the Reconstrained Design Group, were here. We wanted to collaborate with these energy-expert islanders. They understood the need for energy storage and, through their hydrogen project, were already doing it – wanted to do more. Who better to make a new kind of energy storage device with, if not people that might inspire others to do the same?

We went for a week. During that time we learned what it was like living day-to-day in their energy future. And we became part of that future.

Getting to Eday was the first problem. The marine energy test site is there because they have ‘high energy’ sea, which is not just a number in a spreadsheet but a visceral experience that cancels ferries. We leaned into the wind, and watched the white sea from the harbour, noting that humans might be contemplating going to Mars yet still could not get a few miles across the sea in bad weather. We were on the first ferry the next day, and arrived with the stars and twilight.

Our first encounter with the islands’ energy infrastructure was the micro-wind turbine outside our hostel, which boosted the heating. You knew your room would be warm when the wind roared and the long grass flattened outside your window. We had arrived with ‘nothing but the clothes on our back’ so to speak. The design concept was a local energy storage machine, made from the place and the people living there: islanders with their own tools, working with local scrap, drawing on the power in their environment. For environmental power, we decided to use gravity. It had worked well in vertiginous Madeira, where the Newton Machine had been developed. But potential energy can be stored in many forms in the landscape, not just through height. Next up, we needed local scrap.

Scrap is a power and resource in itself in Orkney. There is a local dialect word for it: bruck, which describes both rubbish washed up on a beach, and forgotten things in a cupboard. Bruck is not waste but implies some future purpose may still be found. In the islands, as with many islands, the ethos is: you tie it together with string (or whatever you can find). On Eday, we waded through typewriters and pigeon shit in old churches, we opened a cupboard door and found a bronze ship’s bell, we tore through derelict cars, we discovered submarine parts and other wonders in people’s sheds. Bruck powered our project. If we needed something, we learned to phone around – someone would have it, or near enough.

That brings me to another important power in the islands: generosity. Goodwill was also an infrastructure that kept the place going. It flowed like warm electrons into our project. People turned up with their tools and spent hours building the machine, others turned up with tea and biscuits to keep us going, others with a tractor, someone with a van; the essential motorbike that we stripped down was donated with a smile, an electronic keyboard was found and added to the cause. We were plugged in to this network, and soon discovered that when you plug in to a network, you become inseparable and transformed. Our project was no longer a Newton Machine, it had become the Eday Newton Machine – made with Eday: Made in Eday. We – now meaning us and the islanders – built our operating Eday Newton Machine in a week. Its success demonstrates why the energy future is alive, here, at the edge of Europe.

The islanders are not waiting for someone else to solve their energy problems, or feed them with greener electricity. They are (and have to be) self-determined. They have reconfigured their electricity infrastructure using what they have to hand, drawing on considerable goodwill. The islands might not be wealthy – fuel poverty is a serious problem – but they are rich in other local resources: wind, waves, and bruck. They are showing what the ‘artful integration ’ of existing, local materials, landscapes, and social relations, can do to make an energy future. Their energy infrastructure includes the people and the place: it is social, technical environmental – and enduring.

There is no talk about the end of the world, here. Instead, they jokingly comment that, in an apocalypse Eday, with all its energy, would be a great place to be. This energy edge is not just a place to survive into the future: it is a place to thrive. I hope to meet you there one day.

Our project partners are Andy Stennett and Clive Brookes at Eday Renewable Energy, and Mark Hull at Community Energy Scotland. We are indebted to everyone on Eday who supported the Eday Newton Machine (too many to mention by name). Our sincere thanks to everyone who helped make it happen. 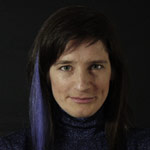 Ethnographer of futures, poet, and writer, she asks: How is the future imagined and made? And, how might landscapes ‘at the edge’ make that future otherwise?

Lucy Wood: “Art can move us on a cellular level in a way that facts alone cannot”

We speak with Lucy Wood about the language used to tackle climate change and about the role of the arts in raising awareness.