The riots in Tunisia and Egypt in recent days have shown that the forms of socialization and civic participation largely take place through social networking interfaces. Beyond technological determinism or social environments we can say that 2.0 tools are modulating the architecture of our relationships.

Benjamin’s language of the cosmos in Passages of Paris, Baudelaire’s forest of symbols, Franz Hessel’s Berlin that “is always in the way, the same way that traffic is always becoming something different,” is a simile in our digital drifts. Global routes or minimum gestures -like a click-can be revolutionary.

In the last quarter of 2010, Pulitzer Prizes have adapted to the digital age by including multimedia narratives, while The New York Times has launched the “Humanities 2.0” section. Despite the critics, multimedia content with audiocomments, either through web or apps for mobile devices are revolutionizing the field of culture, from the education sphere to the narrative possibilities.

Salman Rushdie recently expressed in an interview to Big Think: “The Internet is in some ways like Borges’ The Garden of forking Paths, where you can find a myriad of variations on the same level of authority.”

One of the most recent iinovations was Qwiki, defined by some as the “search engine of the future”: a mash up of information, with images and audiocomments extracted from the network. It won the TechCrunch Media Awards San Francisco, and the web -in its alpha phase- has been sponsored by Eduardo Saverin. As a nineteenth-century novel transferred the digital age, this could be the revenge of the cornered Facebook partner. Qwiki contains both the promise of the Universal Atlas and the threat of a talking panopticon.

The possibilities of extending the concept of literature boom at the pace of the apparition of reading devices and the ensuing battles publishers undergo to establish which will be the main formats. During BookCamp Kosmopolis, some editors noted that in the future, apps will replace the book. The debate should leave the interests of the industry and should be focused on the possibilities of extending the concept of literature as these means offer, and this debate should be established within the field of literature. In the text “La creatividad de la multitud y el sentido del arte en el contextoWeb 2.0” (2008) Juan Martin Prada takes a critical approach to the practice of net.art that is perfectly applicable to the current context:

Its requirement of interpretation (of online artistic practices) is, ultimately, the requirement of a critical, interpretative, and political reflection of the shapes in which the net operates, as well as of the control mechanisms of socialization that it offers.
Juan Martín Prada

By analysing the best apps of 2010 in the English speaking context we can see that outside the education and children’s literature markets -that have great quality products such as Alice for iPad– the literary apps for adults are generally a selection and adaptation of existing literature for new devices. Searching engines of poetry or other quotes such as Poetry app, that are used according to your mood, or just through random use -and are not really necessary if you have a library or a book shelf next to you- can be useful in a mobile device. Others are offering edited content to create a mash-up with our favorite sources. Apps related to social networking have a special honorific place: Flipboard has been selected by Steve Jobs as the best application of the year, and is defined as “social custom magazine”. Flipboard tranforms the contents published by our contacts on FB and Twitter into a magazine layout of our content optimising the visualisation of our favorite social networks. The growing personalization of devices allows access to more channels, but as some experts have pointed out it also generates a certain information bubble isolation.

Another line of interfaces is the one dedicated to the mapping and management of databases, where there certainly has been a boom: Franco Moretti, the critic and “literary cartographer” known for his polemic “Graphs, Maps, Trees. Abstract Models for a Literary History “(2005), is one of the pioneers. Moretti directs the Literary Lab at Stanford University. His areas of research focus on semantic fields, networks plot, structure and style of chapters. Mapping the Republic of Letters, a project from the same university, is a database that studies the epistolary relationships between authors of the eighteenth century and shows the connections between authors on the map. Thus, the application of quantitative methods of social sciences to the humanities territory occurs within a certain controversy.

Barbara Hui, programmer and PhD in Comparative Literature at UCLA offers in LitMap a spatial reading of WG Sebald’s The Rings of Saturn creating an application with Google Maps and Google Earth. The intention is not only locate and label geographical data of the text, but to see and create connections between local and global, between the real space and the imaginary space in fiction.

On an informative sphere, the map of connections between British authors of the twentieth century, set in the United Kingdom and commissioned by the BBC, is based on an application that connects concepts from tagging a database of the authors.

In connection with the way forward of Google mapping techniques are new  initiatives such as Hitotoki, and Global System Poetry, where users generate web content by uploading their poems to the web and labelling them in a place on the map, so the application is available to other users. In our local context, the “map of Catalan literature”, links documents and texts of Catalan writers to a map with the geography of the land. Or the Benjamin Atlas related to the new exhibition Constelaciones, at CBA Madrid, that links Benjamin concepts to one another.

Many existing applications socialize the experience of reading. Although there are many online reading club initiatives, it is worth recomending Candide 2.0, an initiative of the New York Public Library, that offers an interface that serves as a commented guide on Voltaire, and where, paragraph by paragraph, experts and public generally make their comments online. While these applications have the advantage to open roads to interpretative texts, they may also blur them with endless footnotes.

In the visual arts it is has been historically common to work with existing software and data from the network. Not only by artists and programmers who produce generative works such as Casey Reas, or by designers who work with data visualization as Bestiario. A paradigmatic example of metanarrative work (narrative created from metadata) is the one of Aaron Koblin, an artist known for The Wilderness Downtown, a web designed with HTML5 for the band Arcade Fire. By putting the adress of the street where you grew up, the music video action is placed in your neighbourhood, creating an ambiguous, intrusive but also wonderful feeling, through the personalisation of content.9 Eyes Project by Jon Rafman is based on the simple selection of images from Google Street View. “The world captured by Google seems more truthful and transparent because of the weight that awards that external reality gives to it, the perception of a neutral and impartial recording” asserts the artist, that relates his work to the one of Cartier-Bresson. It contrasts with the lyricism of the selected images, which show a strange and beautiful world. If Google’s mission is to “organize the world’s information and make it accessible,” the artist has to select it to create meaning.

To paraphrase Lev Manovich at Data Visualization as New Abstraction and Anti-Sublime, in the first decades of the twentieth century, visual artists “mapped” the visual chaos of metropolitan experience in simple geometric images, these artists have transformed chaotic information in clearly arranged shapes. The use of data not only as abstract entity such as the generative art Casey Reas, but “figurative” and personalized to the insertion of the use of one’s memory in a hybrid force created by the user means it goes one step further.

In both cases we find ourselves in very different discursive positions: Koblin is collaboratively orchestrated so that individual contributions disappear in an architecture that could be called “totalitarian” ( such as the Johnny Cash Project, or the cacophony of Biclycle Built For Two Thousand). In the case of Rafman work arises from the selection. Two types of metanarration dominate these works: Mythologies of the community network and ironic mythology, the one of the “objective eye”.

The fact that, as indicated by J.M. Prada, “the centrality of the Web 2.0 is that the production and management of social networks shows us that social production and economic production coincide. The design of forms of human relationship is presented as a basic instrument of this new production system”. Hence the success of Flipboard and other applications that allow a social profile to become a book.

Real socialization of creative practices in these architectures happen not only because tools are at your fingertips, but you need a semiotics of the interface in contact with the humanities to create the critical devices that bring new architectures that already inhabit the utopia they promise.

“Suddenly I could embrace with a look a completely labyrinthic neighborhood, a network of streets that I had avoided for years since the day a loved one moved there. It was as if at the window a reflector that cut out the zone with light rays had been installed”
W. Benjamin, “Einbahnstrasse” 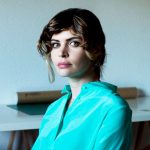 Inside (and outside) the Gutenberg parenthesis