Hong Kong has become the canary in the coalmine in a world marked by the tensions between the demands of complex societies and the power structures incapable of fitting in with them. We talk with Jason Y. Ng about what makes Hong Kong a case to be followed with attention.

A graduate in finances with a Master’s degree in business management, lawyer, writer, columnist, political activist and defender of numerous social causes. It is impossible to define Jason Y. Ng (pronounced “Jason Eng”) with just one of these facets. If, in recent years, we find him dotted all over the place, it is not only because of this hyperactivity but because, as Ng says, Hong Kong has become the canary in the coal mine of a world marked by the tensions between the demands of complex societies and the power structures incapable of fitting in with them. We talk with him about what makes Hong Kong a case to be followed paying close attention.

The pro-democratic movement in the former British colony has long roots stemming back further than the devolution of the territory in 1997, once the  spoils imposed on China during the late 18th-century Opium Wars had been amortised. The perspective of a democratic Hong Kong was born while it was still under British rule and grained momentum when Beijing vaguely undertook to offer greater democracy. But it was in late 2014, with that Umbrella Revolution as a reaction to a restrictive reform of the electoral law, and the blocking of the city’s financial centre with students at the head, which marked the turning point. And not just because it was the first serious threat to the “one country, two systems” formula agreed between Margaret Thatcher and Deng Xiaoping in the 1980s to integrate the fully capitalist territory into the context of a very different China after more than a century of disconnection. Also, because, as Jason Ng confirms, subsequent events lead one to think that the march towards disobedience, commenced in that same year of 2014, is difficult to halt.

“The only reason why we push back is because they’re tightening their grip. Nobody wants to fight. Nobody want to be out on the streets. It’s human nature. Everybody wants to get along. It’s only when your very existence is being threatened, then you’re being forced to go out on the streets and do whatever it takes to protect yourself, your family, and your future generations.”

It is true, that with the unbalanced status quo, Hong Kong moves like a rocking chair. The more Beijing meddles with the territory’s affairs, the stronger the citizens’ response. The stronger the citizens’ response, the more Beijing is convinced that it must control it… And this is despite the mirage, years after that outburst of disobedience in 2014, when everyone asked whether in reality it had been a mirage. Ng even wrote an article in which he asked himself this, at a time when the umbrellas had ended up evoking simply more nostalgia and a sense of fatigue. Until, of course, it started rocking again with the proposed Extradition Decree of 2019, which was seen by the pro-democratic movement as an erosion of the legal guarantees of the territory and the umpteenth attempt by Beijing to bypass them while persecuting critical voices. Ng does not hide his dedicated intellectual involvement – we could even say instigation – as just another committed citizen. With his trilogy on Hong Kong (Hong Kong State of Mind, No City for Slow Men, Umbrellas in Bloom), Ng has followed the main keys of this conflict. Beginning with fundamental values, such as freedom of expression, which Ng feels is being seized from Hong Kong. There are others… Having been subject to the colonial power, the territory’s role as the entry gateway to China and at the same time one very open to the rest of the world, the growing inequalities of a society with a lot more pressure than previous generations, or even the extremely high population density and the fact that “everything circulates extremely quickly”… All in all, has contributed to this society having taken the lead in resisting against a China that has growing influence around the world.

“Whereas even foreign governments are willing to play the to toe the party line and do what Beijing wants them to do,for economic reasons, for trade reasons, Hong Kong people are willing to sacrifice some of their economic interests to push back China, and it is that sort of fighting spirit that makes Hong Kong slightly diferent from the rest of the world, slightly more ready to become the first line of defence against the expansion of China.”

A first line that, five years after the Umbrella Revolution, is no longer a simple peaceful protest. The extension of the protest around the different districts of Hong Kong and the radicalisation of a part of the demonstrators with Molotov cocktails or homemade weapons used against the police or incidents such as the death of a cleaner from the impact of a brick.

“At the end of the day, we don’t know Beijing’s agenda. We don’t know whether they’re willing to allow some form of universal suffrage. We don’t know what cards they hold, right? If we assume that it’s impossible so let’s not even try, that’s exactly what they want. […] Our job, as a society, is to push the envelope as much as we can. We want to push the boundary, to test their limits. […] So, even if it looks impossible, number one: it could be just the impression they want us to have, in which case we cannot let them win in that game. Number two: even if it’s impossible, politics is not about calculating costs and benefits, what is possible, what is not. Most political movements in the world, in history, are done by people who are in the most hopeless situations, but because they have nothing to lose they decide to come out and voice their demands, and that’s how things. That’s how changes are made. So we will continue to operate under that philosophy.”

Asked about identity, Ng does not hesitate: “Yes, I am Chinese ethnically, but when people ask me to describe myself, I say I am a Hongkonger.” Certainly, if anything has changed with the years of protests it is the number of inhabitants in this territory who think like Ng and who feel that there is an emotional connection with Continental China.

“Two or three or ten years ago, if you asked what the Hong Kong identity is, nobody could really tell you. But today, if you go to the streets of Hong Kong and ask, people will point tangible things like our music, our poetry, our literature or our language, Cantonese. And that pride, that self-confidence, that dignity is only going to be more crystallized and become more distinct”

Without fear of being accused of naïve, and acutely aware of the imbalance of forces, Ng’s final sentence is that the solution to the Hong Kong problem “is very simple”: they have to be listened to. And he ends by wishing that his words are listened to by those who are deciding its future policy. 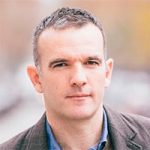 Director of betevé and journalist.