Given that print book sales have dropped 40% over the last decade, do we really think that when we finally emerge from this damn crisis readers will go out and buy print books again? The fall in print book sales is not just due to the crisis. We are currently in the midst of a major transformation of cultural habits that is dramatically altering reader behaviour. This is not just a change of economic cycle, which usually corrects itself in a period of 5 to 7 years: we are entering a change of era that is radically transforming the cultural sector.

If we want to recover the 900 million euro turnover that has been lost in recent years, book industry professionals will have to accept that the main channels of growth will not involve the sale of print books, but rather the sale of digital content. Given this harsh reality, it is surprising that the Spanish publishing industry seems so unconcerned about the slow growth of e-books in our country. Following the release of figures showing that e-book sales make up less than 4% of total book sales in Spain, many professionals from the book world (publishers, agents, booksellers, authors, etc.) responded with a huge sense of relief.

Instead of bothering to analyse the reasons behind this slow growth, and taking strategic decisions to boost the demand for digital content, there appears to be a feeling of satisfaction in the industry, as if a supposed battle against the digital realm had been won. Statements such as “print books are holding their own against electronic books” and “our culture is different to the English speaking world, that’s why we don’t read on screens” are signs of a disconnection from the transformation that is taking place in our society. We know that each different cultural industry (film, music, books, etc.) has its own dynamics, but we should also realise that the new digital era is generating singularities that cut across the entire sector and should not be ignored. The music industry, which also failed to pay attention to the changes that were taking place in society, has seen its turnover plunge 80% in barely two decades. After years of trying to curb an unstoppable reality, music downloads and streaming already make up 42% of the turnover. Against this backdrop of social transformation, the book industry should start working to create a broad market of on-screen readers as soon as possible, rather than feeling relief at the mirage of supposed stagnation. Print book sales are clearly plummeting, and only the digital side is growing, even if the growth is slow for now. Does the turnover of the publishing industry have to fall by 80% before we realise that we are seeing a change of era? If we want to develop a robust market for paid digital content, the book world will have to start making digital decisions now.

In Spain, the rapid uptake of all types of smart devices such as tablets, smartphones, phablets, and so on (last year millions of these gadgets were sold in the country) has changed the ways in which many people habitually access culture, information, and entertainment. What types of new content should the publishing industry create to attract the attention of twenty-first century readers? For years now, many professionals in the book world have been pondering what the books of this century will be like. Will text still be the principal storytelling language? What other formats (audio, video, images, etc.) will be used for this purpose? How will the production process for 21st century novels evolve? What is the role of the publisher in this whole process? How should a work in various formats be marketed? How can the financial effort that goes into creation generate profits?

Many publishers continue to cling to the traditional, romantic definition of a book. In these kinds of discussions, they usually say that these new formats are apps or videogames at best, but not books. Nonetheless, more and more people are beginning to see these new formats as 21st century stories, told on screens for 21st century readers, regardless of their age. Just as publishers were able to attract the attention of readers in the analogue age by discovering authors from the period, the challenge for the industry is to create new stories in digital formats that attract the interest of readers in the digital age.

A Firm Commitment to the Redefinition of Business Models

Given that only 32% of people who read on screens currently pay for digital versions, what new business models should we implement in order to minimise illegal downloads? The evolution of digital models will become increasingly complex. Managing e-book sales processes in online stores such as Amazon, Casa del Libro, Laie, and Elkar is a relatively simple model. Selling licences for a specific number of e-books in order to provide access for a limited number of library users is a little bit more complicated. Fragmenting the contents of a publishing house into chapters or books for subsequent remixing in the sales process is a little bit harder still. And licensing your content on “pay for what you read” platforms involves an even more complex level of management. This increasing complexity should not delay the implementation of the new business models, as this would result in a loss of revenue over the next few years.

Looking beyond the turnover generated by the different business models, the real added value that comes from backing digital publishing is getting to know readers directly, seeing their behaviour in the process of discovering and buying books, and analysing their reading. Anybody who keeps an eye on new developments in digital analytics will be amply familiar with headlines that announce the big data boom or rise in any cultural sector worth its salt that wants to know all about its customers and provide the best service. Until relatively recently, publishers could only access limited information about the sale of their books, such as which bookstores stocked them and the number of copies sold of each title. Now we have moved on to the possibility of getting to know readers and potential readers, sometimes without middlemen. In this redefinition of new business models, one of the main income streams for publishers will be by-products of published content. There is a long list of possibilities: publishing services, marketing services, promotion, recommendations for future reading based on real affinities or previous purchases, archiving of purchased material, note storage services, access to communities of people with similar interests, etc. Publishers and booksellers should not forget that Internet users do not just pay for the content they want to consume, but also – and above all – for related services.

Another of the keys to the second part of the decade (2015-2020) will be self-publishing in the book world. In the world of journalism, the result of the arrival of blogs, Twitter, and so on meant that digital media, led by people outside of the industry, took away the “supremacy” of information, just as the consolidation of Wikipedia did in the world of encyclopaedias. Similarly, the emergence of new self-publishing platforms that allow anybody (amateur or professional) to publish their own book is reinvigorating the publishing world. Sales figures for the past few years are starting to speak for themselves. According to a Bowker report released last year, self-published books make up 12% of total book sales in the United Kingdom. In 2013, publishers in the United States admitted that self-publishing had increased by 58%, and soon after Amazon reported that their self-published books already accounted for 25% of their top 100. At last year’s Frankfurt Book Fair, Amazon claimed that on this side of the pond, at least 20% of its sales came from self-published writers, while Kobo said that the same applied to 10% of its sales. In other words, a group of readers are buying self-published books to the detriment of books marketed in the traditional way by the publishing industry.

If we want to develop a robust market for paid digital content, we need to offer consumers a wide range of competitively and dynamically priced content, as well as related added-value services of all kinds, as mentioned above. Readers should understand that the digitalisation, distribution, and promotion of any type of content on the digital market is not free or incidental. But at the same time professionals from the book industry (publishers, agents, and authors) should also accept that the game rules of generating supply and demand have changed with the introduction of the Internet.

Publishers and bookshops should realise the benefits arising from the concept of “dynamic pricing”, although this does not mean infringing the Fixed Book Price Law. Just the opposite: a dynamic pricing strategy guarantees the validity of the fixed price law in the digital era. In the analogue world, most publishers only considered the price of a book once or twice in its life cycle. The retail price would be decided on the day of its release, and some time later it would be reconsidered in order to determine the retail price of the paperback edition. With the emergence of the Internet, this price-setting model became obsolete. Rather than permanently lowering the prices of eBooks to discount levels – which would be a counterproductive policy for authors and publishers in the medium term – the idea is to learn to set the most competitive price, carrying out pilot projects in order to find out the price band that has the greatest demand, the time and day of the week when a particular price generates the most sales, and the impact of the new price on the visibility of the book (position in bestseller lists).

In the society of limited attention that we now live in, authors and publishers need to understand that reading a print book competes with a huge amount of free content (open and free of copyright) and millions of entertainment options on the Internet. If we want the book world to play an important role in digital society, we have to improve the experience of discovery, purchase and reading on the Internet, compete with more competitive prices in line with other entertainment options, and offer the possibility of sharing the reading experience – which is not the same as sharing the product itself – with other people who share similar cultural interests. 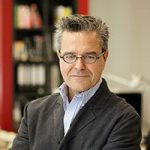 Expert in the digital era and founding member of dosdoce.com, he works on gaining literacy in new technologies aimed at publishing companies, bookstores, libraries and museums.