A boy watches a motion picture through a mutoscope at the penny arcade of the Imperial Valley county fair. El Centro, California, 1942 | Russell Lee, Library of Congress | Public Domain

This is the first in a series of articles that explores the world of audiovisual narratives in order to try to understand the workings of the formats that are most attractive and accessible to new virtual audiences. This first instalment looks at audiovisual pieces with a duration of three minutes or less.

Audiovisual formats designed for the web share the iconography of traditional media, and are created based on the inherent characteristics of digital media. They can range from photographs to pins, gifs, memes, infographics, and animations, as well as formats based on the language of film or television, such as trailers, teasers and previews. There are also versions of the journalism genre, such as interviews, dialogues, tasters or reports.

If we begin our analysis with bits of information, images are the fundamental element. Even the simplest image or audiovisual piece can be a means to transmit short messages, illustrate complex ideas, and enhance written text. The CCCB Lab Blog, for example, has been using vintage photographs with creative commons licenses for some time now, with a dual purpose: as a visual introduction to the posts, and as a part of a commitment to open, distributed culture.

Moving on to image sequences, we find GIFs, which are having a particularly strong impact on social media. The informal aesthetic, sense of humour and hypnotic immersive flow of these short loops make them highly attractive, user-friendly, and easy to disseminate. The TATE Modern uses them brilliantly to illustrate its collection, in sequences that have a strong viral potential and a positive audience response. The aim of this initiative is to boost the participation of young digital audiences who are not familiar with the museum. The project is based on the ideas of Marie Laure-Ryan, who is critical of the elitist conception of culture and argues in favour of taking digital narratives from the poles and into “temperate zones”, targeting a broader and more heterogeneous audience.

GIFs can also be seen as a tool for convergence between the institution and audiences. They have been used to explore the museum space and to animate works like the Venus de Milo, and artists can even use them to move through different landscapes in a loop. Their use is so widespread that prosumers constantly create new animations based on all kinds of things, such as the routine nature of visits to exhibitions.

Another medium that is still relatively unexplored is memes. Few institutions have ventured to use them, although Lucy Redoglia, head of social media at Los Angeles County Museum of Art (LACMA) does not hesitate to create and share them through the museum’s Snapchat account. Once again, the aim is to take classic works of art to young audiences, using a language that connects with teenagers. The combination of Renaissance paintings and contemporary phrases from popular culture like “Bad Hair Day” and “I’m sexy and I know it” result in guaranteed likes; so much so that some of their posts get to 60,000 views in a single day. «Framents» by Marcos Prior. Based on the conference «Mi experiencia en la comunicación cultural» by Ernesto Castro.

Continuing with the thread on short audiovisual formats we come to informative microvideos (<1 minute), which can be used to transmit information. Trailers, for example, are short clips that raise audience expectations in the leadup to the release of a new work or episode. ART21 uses them for artists’ presentations, combining rhythm, attractive shots, superimposed text and an enveloping soundtrack. The Tate uses the same synthetic style to share videos by international artists on its instagram account.

With these examples in mind, we should note that there are risks involved in visual aestheticisation. Instead of simply editing together a sequence of appealing images, it is important to add value and transmit ideas, and to avoid overwhelming viewers with information that is heavy on marketing. As we have seen, “meet the artist” type content is an example that is attractive to both sides: audiences enjoy them and they generate trust in the museum because they take an appropriate and careful approach to the information they transmit. A studio visit, a description of a working method, or notes on an artist’s background and career are some of the strategies that are often used to raise interest. This approach is also valid for longer videos, although in this case it can be more difficult to hold audiences’ attention.

Another kind of informative clip is the teaser, such as the one used by the FILMADRID Film Festival to attract virtual audiences away from digital screens and into theatres, in an attempt to bridge the physical gap through a social media strategy. How do they do it? The video is a collage of colours, actions and sounds, creating a simple sequence that is successful with few elements: the vignetted logo and images of the films that are to be projected at this year’s festival. Music is once again an important element, setting the pace and raising expectations.

In another example, this time based on a two-way communication campaign, the Buenos Aires International Documentary Film Festival (FIDBA) has organised a participatory video workshop, launched with the hashtag #larealidadesmás. The idea is to encourage viewers to create and submit short documentaries, which are then compiled on the festival’s YouTube channel. This campaign promotes the latest edition of the festival, activates social media channels during off-peak periods, and prepares audiences for the upcoming opening of the festival. It can also be used to draw attention to other issues.

Moving on to longer durations, we come to short videos (<3 minutes). A good example is Playground Magazine, which uses a 1:1 screen format, staccato editing, superimposed text, and images in which the sound has been displaced or omitted. These videos are intended to be watched by users scrolling through Facebook, which is their preferred location. These auto-play videos create a hypnotic effect through an appealing succession of moving images. Users do not devote much time to them, as they rarely want their personal zapping interrupted by long videos, an aspect that has to be taken into account when posting material. The key to the virality of the videos used in Playground magazine lies in their mastery of edits, in knowing how to take advantage of situations that arise, and reflecting the most commented news on social media.

Another example is Le pressentiment, a project by the Barcelona-based philosophical-political group Espai en blanc, which also works with short formats. Their idea is to raise political awareness through the use of an audiovisual language that can shake up the preexisting ideas of the people watching them. In addition to their distinctive graphic images, they have also started to explore video, building narratives around key concepts.

Fragment of video installation «Ever is Over All» by Pipilotti Rist (1997) | El Pressentiment, Microvídeos

Returning to the world of museums, we find the case of footage of events that are held in the physical space and filmed as a record. There are various possible ways to use this material. If the idea is to generate interest around a particular talk, it may not be appropriate to disseminate it in full on social media.. The first decision that has to be made is whether the material is to be shared on channels such as YouTube, Instagram, Facebook and Twitter or whether it is intended for the web. Then the duration can be decided. The TateShots series, which posts videos on YouTube, uses several customised approaches,. such as typographic animation to highlight the key ideas in a conversation with Grayson Perry and vox pop interviews to highlight the comments of visitors to an exhibition on the work of Man Ray and his relationship with Lee Miller, for example.

As for targeting particular audience groups, the Metropolitan Museum of Art makes a special effort to communicate with young audiences (aged 7-12) through the #MetKids blog. The idea is to disseminate information and entertainment videos that show the museum as a fun, fascinating space for children. The videos take a postive, personal approach to art and show the activities organised as part of the exhibitions, as well as allowing children around the world to discover the collection the Met Museum. Projects include creative tutorials, animated stories based on the works on display, and talks by experts about some of the curiosities at the museum.

When the idea is to disseminate the opening of a new exhibition, a promotional video can be made instead. There is no reason why emphasising practical information should prevent museums from working with curatorial nuances as well. The approach used by The Met for the diane arbus: in the beginning exhibition is a clear and concise example. Faced with the impossibility of interviewing the late Diane Arbus, the curator of the photographic archive explains the photographer’s views and the relationship with New Yorkers that resulted from her photographic practice.

Another aspect to be taken into account when trying to develop a coherent narrative line is the need to determine the role of each element in the interconnected structure of web content. Each post coexists with the ones that came before it and the ones that will follow, in a discourse that should be mapped out in advance. At present, short videos are used as previews that circulate on social media, sparking interest and attracting audiences to the websites, which, in the case of museums, have much larger repositories of material. They are used as part of a holistic approach to communication that makes use of both source content and satellite materials to expand and enhance the information. 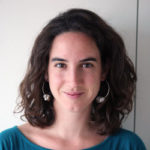 Violeta Blasco is an independent filmmaker specialising in documentaries. She is currently investigating the representation of women in the interactive documentary.

Marcos Prior is an illustrator and comics scriptwriter, he has also worked in advertising, designing storyboards.