One of the key characteristics of movable type technology is that it guarantees the exact reproduction of content, quickly and in multiple copies. A new wave of artists is now using print in myriad ways, employing print-on-demand technologies to affordably produce artists’ books and magazines and to transfer Internet content to paper. Artists are also using structured processes and software to create new types of publishing that break established rules and conventions. In the post-digital era, print can be culturally subversive, particularly when its unchangeability is strategically used instead of rejected as obsolete.

One of the key characteristics of movable type technology is that it guarantees the exact reproduction of content, quickly and in multiple copies. Historically, this has had at least two major consequences: on one hand, print “validates” content, given that once it’s printed it can’t be changed, and this generates an aura of “legitimacy”; at the same time, from the perspective of preservation, the intrinsic stability of the printed medium has allowed the ongoing availability of content. This has been reinforced by the presence of copies in different types of contexts (private owners, libraries, etc), which is precisely the ideal strategy for preserving digital data for as long as possible. Print is relatively easy to conserve: the oldest surviving printed book, the Diamond Sūtra was produced circa May 868 AD and as such is an estimated 1,145 years old. Print is probably the longest lasting medium in use now, and fully deserves its “archival” status. This is why print is still used to archive digital content even given the proliferation of digital publishing.

The strategic combination of the large amount of free content available on the Internet – popularly referred to as “big data”– and the availability of inexpensive online print-on-demand online platforms (which make it possible to cheaply print small print runs of uploaded books that can be updated at will) has favoured the emergence of a whole new generation of artists’ books. Content is harvested from the Internet and re-worked into a more-or-less classic book format. Assembling tweets is a sub-genre in its own right, for example. Among the many titles we can find My life in tweets, one of the first “tweet travelogues”, published by James Bridle in 2009, #Occupy Books, a collection of Occupy Wall Street related tweets posted in a twenty-four hour period, published in 2012, and this year’s ephemeral Working on my novel by Cory Arcangel, which compiles tweets by people announcing that they’re working on their novel.

Artist Paul Soulellis has described this now-classic strategy of printing data harvested form the internet as a “search, compile, publish” sequence. He refers to artistic production of this kind as the “Library of the Printed Web” and he has attempted to compile a draft taxonomy that revolves around three categories corresponding to the three main strategies: “grabbing” (and scraping), “hunting” and “performing” (Soulellis has also recursively printed two “catalogues” of publications he selected for the three categories).

In the “grabbing” category, Soulellis includes artists who perform web search queries and then use the results. They are usually interested in how the search engine interprets the initial idea expressed through an appropriate query. A good example is Silvio Lorusso and Sebastian Schmieg’s 56 Broken Kindle Screens in which the two artists collected e-readers with glitched, frozen screenshots and combined them into a small conceptual (and archival) publication (Lorusso is also a researcher and connoisseur of the print-on-demand art book scene). Another specific sub-genre is based around extracting meaningful selections from Wikipedia (beyond their own PediaPress publishing efforts). A few examples include: Rob Matthews’, Wikipedia (2009), an assemblage of featured articles; The Iraq War: A History of Wikipedia Changelogs (2010) also by Bridle, a printed record (the author calls it a historiography) of all the changes to this Wikipedia entry from its creation in December 2004 to November 2009; and The Wiki Truth (2012), by Kyra van Ineveld, which consists of five huge volumes containing the one hundred longest Wikipedia entries. “The Iraq War: A Historiography of Wikipedia Changelogs”. James Bridle.

Hunting, finding the needle in the haystack

By “hunting” Soulellis refers to taking highly specific screen captures to support an idea. Artists working using this approach usually reject most of the results in response to a query because they are looking for “exceptions”. Although plenty of photography books are compiled using similar strategies, Michael Wolf’s “asoue” – an acronym for “A Series of Unfortunate Events”—, has a special place in this category: Wolf took photographs of specific sections of a computer screen displaying Google Street View, as if they had been taken on the streets. He then published them as if they were a traditional photography book (which is another popular genre of print-on-demand art books).

The “editorial” attitude of these strategies is also used in analogue projects, perhaps inspired by the amateur publishing that is favoured by access to search engine data. An example along these lines is the City Strips zine: its first issue, published in 2014 and entitled “The Amazing City”, is comprised exclusively of panels from the Amazing Spiderman series set in NYC, published from 1963 to 1974. It reconstructs views of the city during those years through comic book panels depicting architectural elements. In its silent narrative, it invites readers to re-appropriate images, situating their own algorithm of selection and re-assemblage from famous copyright-protected comics within a broader scope that goes beyond collecting.

Performing, printing as a web-based process

“Publishing-performing the Internet” is how Soulellis describes this category, in which he includes artists who use a procedural methodology with a narrative that materialises performatively somewhere between web and print. His main example is American Psycho by Jason Huff and Mimi Cabell, a version of the original novel by Brett Easton Ellis in which the entire text (printed in white on white and, therefore, “invisible”) is annotated with contextual ads obtained by sending the same text, page by page, through Gmail. This publication is an example of what can be more broadly defined as “processual publishing”, where the processual nature of the editing process (in this case matching the software process) determines the work. Artist Gregory Chatonsky developed another example in his work Capture: a prolific rock band that generates new songs based on lyrics retrieved from the net. The band performs live concerts of its own generated music and is very active on social media, but it is totally made up. Its biographical information and other accompanying texts have been compiled by retrieving pictures and texts from the Internet and then carefully, but automatically, assembling them using a specific layout, and printing them. These printed biographies are both art books and standard books, and at the same time components of a more complex artwork.


Subversive printing as a performative gesture

A book can be used as an explicit repository in which to conceptually collapse a small library into a single item. Inspired by Jorge Luis Borges’ short story “The Library of Babel”, Philipp Adrian compiled his work An Index(5), which consists of two print volumes containing all the possible permutations of five letters. As such, Adrian claims to have printed the index of the Library of Babel, given that the first five letters of any printed book should be there, somewhere. Meanwhile, if print is also a kind of portrait – because its content is similarly frozen in time – then its qualities can be remarkably useful to artists who want to explore the same type of content in digital format. An example is Jesse England’s E-book backup, an artists’ book containing the full text of George Orwell’s 1984, in which every page contains a photocopied image of the same page displayed on an Amazon Kindle, explicitly referring to the controversial 2009 incident in which “Kindle users found their copy of George Orwell’s 1984 and Animal Farm had been removed from their Kindles without their prior knowledge or consent.” The pages of some of the most interesting artist’ books are filled with material that is not supposed to be printed, for a variety reasons. So subversive gestures, particularly breaking discretion, can be attempted. The anonymously authored Contacts is an excellent example: a compilation of business cards belonging to key decision makers in the fields of art, media, politics and culture, after ten years of “excessive networking”. A strategic privacy leak. Print as a subversive archive has also been used paradigmatically, at the highest emotional intensity, by artist (and UbuWeb founder) Kenneth Goldsmith. Several of his works have acted on his commitment to bringing Aaron Schwartz’s vision to the art world through print. In a radical, symbolic action Aaron Schwartz downloaded and shared 2.7 million copyrighted and very expensive academic publications from the academic online journal service JSTOR. As a result, he was arrested and threatened with a possible fine of one million dollars plus several years in prison. He committed suicide in 2013 at the age of 26. One of Goldsmith’s most renowned performances (inspired by Schwartz) is Printing out the Internet, in which he asked people to print out whatever they wanted from the Internet and send it to him to be displayed in a gallery space (LABOR in Mexico City). He received a few tons of paper in the mail, and a reading marathon began (“reading the entire internet”). There were some negative reactions of course, such as the spontaneous online petition asking him to stop the work for environmental reasons. Goldsmith went even further, reprinting 250,000 pages from Schwartz’s liberated files in a public installation at Kunsthalle Dusseldorf, as part of the exhibition Smart New World, deliberately performing a gesture he felt did justice to Schwartz’s vision. His subversive use of print for the archiving of unauthorised digital information uses the medium in an intricately illegal way, streaming technologies and available data; still one of the most controversial ways in which print can be used today. 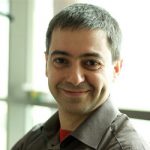 Artist, media critic and chief editor of the journal Neural.