Between December 2021 and March 2022, Ctrl+Z took place, a lab in which a group of young people came together at the CCCB to envisage a programme of thought that includes the approaches, reference points and concerns of young adults. Accompanied by La Sullivan, and in conversation with creators, programmers and thinkers from the city, the result has crystalised into Bivac. Festival of Young Thinking and Creation, which is being presented as part of the Biennial of Thought. We asked La Sullivan to share some thoughts, questions and provisional conclusions from this work process.

Like all projects, this one also started with a question: what would happen if a group of young people curated a festival of thought? In other words, what would change if young people were not passive recipients within a cultural institution, but agents who imagine, organise, formulate, decide and propose? This is was the basic premise of Ctrl+Z, a training workshop that brought together fifteen young people from various disciplines for more than seven months at the CCCB to design a writing festival and which, from the outset, questioned how it would be designed, by whom, and what direction it would take.

More than how we have worked – half of the project imagining and stirring up debate with the support of thinkers, curators and artists; the other half activating the process of producing the festival – the purpose of this article is to trace out the learning, the questions in progress and the provisional conclusions we have reached; to share the thought that we managed to generate, collectively, when the roles of those who produce knowledge were turned around and the dynamics of access to the management of knowledge were transformed. To put it as a question: why is it important that it should be young people who, today, structure the way in which thought is presented to the world? Which also means questioning who has the floor, how it is presented to the public, which themes are emphasised and which formats are prioritised. We can only answer this, however, by asking other questions. Three to start with: what do we want to think about? In what situations do we think? What relationships does thinking require? Three questions which, in fact, give rise to others: where can we think? Who do we think with? How do we think? When do we start thinking? And: what happens when we think? Firstly, though, there is one big question that is fundamental for a project like this: what does it mean to be young? The answer, at this point in time, is not at all clear (perhaps because being young is, above all, to ask oneself questions).

Aware that there is no pure space or empty place from which to activate a primordial thought, a writing festival such as this one must necessarily begin by questioning the conditions and possibilities of that which it articulates. This made us realise that the spaces established for thinking – formal, institutional spaces – did not figure among our responses, and that the map drawn out by our answers was an uncertain zone, somewhere between intimate and imprecise, ordinary and unsocial, far removed from corporate devices and hegemonic entities of knowledge. Neither academies, nor schools, nor universities. The first challenge, then, was to transfer this displacement to a festival that will take place at the Centre de Cultura Contemporània de Barcelona.

Aware, moreover, that thinking and thinking well are not synonymous – there are conveniences, privileges, conditions and impediments – the answers were also articulated around those who accompany us in the act of thinking: those who think like us, those who do not, those who are no longer here, those who left knots to disentangle and entangle again, those who asked us to continue working on the problem, those who sabotage the possibilities of articulating thought. A new challenge: to coordinate a polyphonic proposal that is expressed in such a way that it comprehensibly incorporates these voices, alliances and impediments. Which is the same as wondering about the possibility of conjugating knowledge in different way, rather than in an armoured, secure space where differences and fissures have no place. Which is the same as believing that in absolute knowledge, and in absolute non-knowledge, there are no cracks in which to structure new discourses and offer new formats.

Curating from a place of youth, then, must involve an invitation to thought. An offer to short-circuit inertias and to traffic against the postulates of normality. It is also an invitation to recover our condition as thinking beings and to inhabit those places outside ourselves, transcending identities and categorical affirmations: to begin to relate to those who we do not wish to see, as well as those who we do not expect and those who do not expect us. This is how we arrived at the idea of shelter – a place of temporary and vulnerable protection that shelters us when faced by danger or bad weather and, in this context, the basic concept on which the festival will be based. A shelter is a construction that protects, but is not built to last like a great edifice that battles against history. The festival must be a shelter because it must not avoid, at any moment, the tension with that which remains outside – that which awaits us, something akin to observing the storm from under an unstable canopy, feeling the snow fall from within a flimsy tent or hearing the thunder from a wooden hut. A concept, that of shelter, which combines the power of a temporary utopia, which comes to an end – in other words, a rehearsal of what is wanted and desired – with the transforming gesture of active creation that answers, transforms, proposes and imagines. Shelter, we tell ourselves, embodies the narratives of future narratopias, which tend to remain in the sphere of discourse without ever forging a commitment to the palpable, everyday reality of the world.

What is more, in its fragile condition, a shelter embraces the delicate nature of that which emerges. We decided, however, to envisage the concept of emergency not just as the alarm and the irruption of the crisis: an emergency is that which grows unexpectedly, which follows no rules, which rehearses its own condition from one moment to the next, against the limits. Here there is another link with the youthful essence of the festival: isn’t being young, in fact, to be in a permanent state of emergency? Neither ages, nor conventions, nor petrified narratives: isn’t being young the fragile promise of a shelter that doesn’t last and that, at the same time, needs to imagine so as to live with its delicate condition? We turned the question into a concept, and this is how we arrived at the image of the bivouac, the minimum expression of temporary shelter and an example of an intervention to protect us that does not alter the world, but adapts to and communicates with it.

And so it was that Bivac became the name of the festival we want to create. In a context of permanent provisionality, of absolute present, of speed and of apocalyptic stories made incarnate, we believe that bivouacking is a humble way of intervening in the world and transforming it without imposing the historical human footprint that wishes to remain, adulterate and control in the name of personal gain. Also, because we believe that something which does not last is active participation, that thought does not have to be imposed and that the threshold between comfort and discomfort, home and outdoors, is a space and a time where we can think better.

These are just a few of the ideas we have worked through during the months that this project has lasted. As we explained at the beginning, here we wanted to trace out a part of the process of collective gestation that has crystallised into a concrete form. We won’t talk here about methodologies, guests, obstacles or results, but only about the questions that have catalysed the ways we work and some provisional answers we have arrived at. We believe, however, that we have discovered – at least we sense – some of the things that make this project and this festival a unique and special event, and which, when boiled down to a simply written sentence, may seem obvious: a festival of writing and thought can only be created by rehearsing and thinking. And this article is a testimony, as well as a piece, of the evidence put to the test. 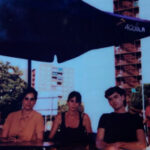 Judit Carrera: “The purpose of cultural centres is to generate connections”