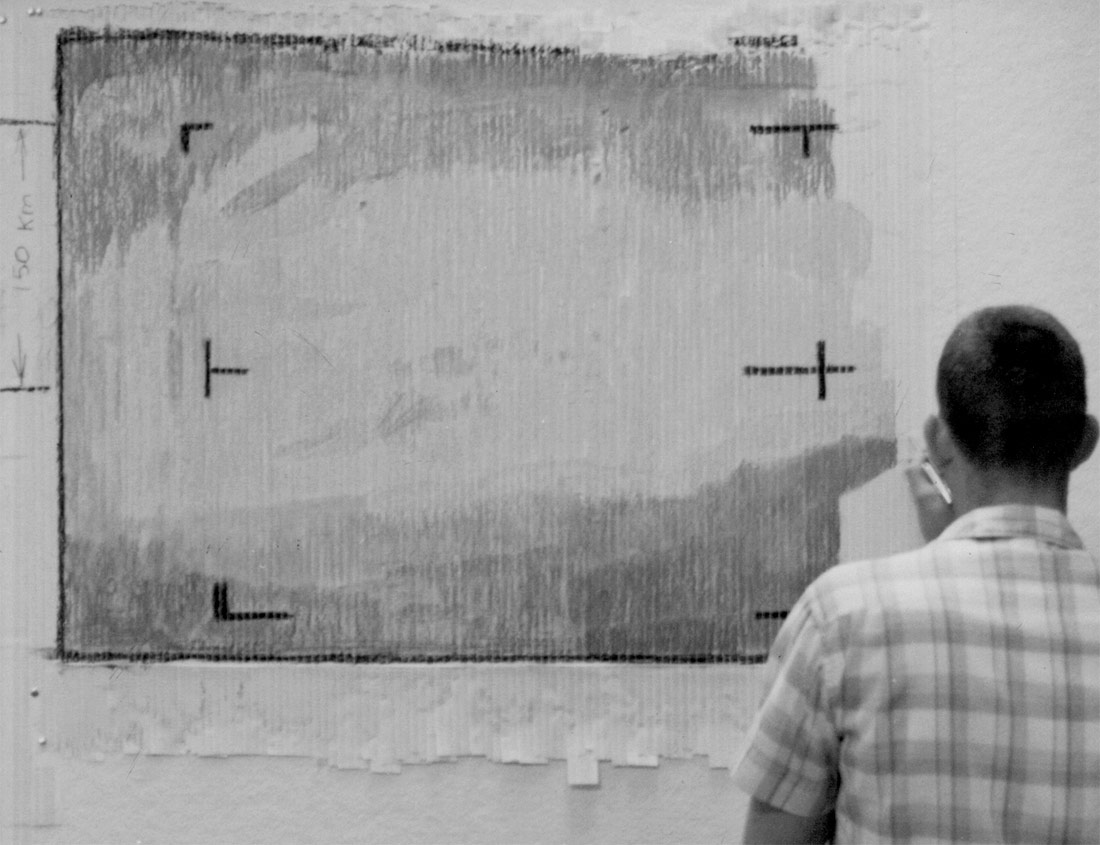 Art’s intuition has often provided the key to imagining what science has then gone on to explore and prove. While Space Art played a fundamental role in forming an image of the solar system long before real photographs reached us, contemporary art speculates on the new future of interplanetary colonization presented to us.

Humanity has always aimed at the stars, with the artist as the medium through which we channel the vertigo of the unknown and our desire to possess it; the intermediary who, either by direct observation or by means of the visual transfer of data, translates distant mirages that fix the collective imagination. The inhabitants of Lascaux caves (France) were the first to record this interest in the universe with no scientific certainty and, thanks to the visionary skill of artists, it was possible to know what Jupiter, the Milky Way, Kepler-1649c and Mars looked like long before the invention of astrophotography or digital photography.

Mars is that flickering, reddish star, strangely familiar and not too far away, which for centuries has captivated scientists and creators alike: from the scrawls of Christiaan Huygens to Schiaparelli’s “canals” and the first Martian fan phenomenon, taking in the early realistic illustrations by Léopold Trouvelot. All are cosmic interpretations of captivating beauty that have rendered the invisible visible.

But why Mars? Mars is close; we can get there, as Perseverance has shown, in just over half a year. It is similar to the Earth in size and its days (barely 40 minutes longer than ours), but also because we see similar characteristics in its landscapes: its mountains, its lakes (now dry), its snow-covered caps, its craters, valleys and deserts evoke the wild beauty of the natural landscapes of Utah or Arizona. Its surface is rocky, not a gas bomb like Jupiter’s, and though it lacks our oxygenated atmosphere at least it is not enveloped in a thick, poisonous one like Venus. As planet Earth deteriorates due to the environmental ravages caused by humanity, Mars is emerging as a possible not-too-distant future. Thanks to Space Art and its retro-futuristic prints in the late 19th and first half of the 20th century, ordinary citizens were able to form a picture of the solar system and the planets that inhabit it. Also known as “astronomical art”, however, it became an excellent propaganda tool for future space missions.

Lucien Rudaux and Chesley Bonestell were two of its foremost exponents. In 1892, Rudaux, the grandfather of astronomical art, published Observations on Mars, with drawings showing characteristics of the planet such as its “seas” and the polar caps. Bonestell, meanwhile, is considered the first modern space artist, thanks to his thought-provoking realistic drawings. His skill led him to create special effects for Hollywood, and in 1944 Life magazine published one of his illustrations of Saturn, making a real impact on public opinion.

It was then that the potential of Space Art came to the fore as an art capable of stimulating the imagination of a society exhausted after a long world war, offering a star-studded future vision and, at the same time, preparing the ground and programming a new mentality for the imminent space race. NASA realised the potential offered by these creations and their ability to create a collective imaginary, transcending the tangible, removing barriers and bringing scientific innovations and discoveries closer to ordinary people. Illustrators such as Luděk Pešek, David A. Hardy and Ron Miller became interpreters of these findings, and Space Art not only helped to attract the interest of the general public, it was also an excellent fundraising tool. From this moment on, artists and scientists worked side by side to translate present and future research into thought-provoking images.

Coming right up to date now, art and contemporary photography have closely followed the fortunes of planetary exploration, the results of which have inspired numerous works and served in turn as a vehicle to visibilize certain present-day issues. Photographers like Vincent Fournier or the American duo made up of Nicholas Kahn and Richard Selesnick find in space paraphernalia and Martian landscapes the raw material for their simulated futuristic worlds.

Kahn & Selesnick create visual stories in which the terrifying and the sublime go hand in hand. In Mars: Adrift on the Hourglass Sea (2010), two women astronauts roam the planet’s surface and find the remains of a previous civilization. French photographer Vincent Fournier, meanwhile, after having access to highly controlled spaces such as the Gagarin Cosmonaut Training Center in Moscow (Russia) or the Mars Desert Research Station in Utah (US), recreates aseptic scenes of hangars and Martian panoramas in which the human figure is set, like a traveller lost in the immensity.

Thomas Ruff, a German photographer and heir to the conceptual aesthetic who, together with Andreas Gursky, Candida Höfer and Thomas Struth, was part of the Düsseldorf School of Photography, where New Objectivity emerged, uses NASA’s public archives, saturating and draining them of colour, compressing them to offer new perspectives or rendering them in 3D. In ma.r.s (2010), he manipulates and reappropiates the black and white photographs provided by the Mars Reconnaissance Orbiter satellite. Ruff reflects on the role of photography in the digital age and says that the photographs “look real but are completely fictional”. For the artist, “vision has little to do with our eyes and more to do with our brain. The brain sees, not the eyes”.

Other conceptual creators have not only reappropriated archives and images of Mars, but actually sent their works to the planet itself. This is the case of Damien Hirst, who participated with a small piece as a calibration chart that he sent with the Beagle 2 space probe, launched by the European Space Agency in 2003. In 2015, the Mars Reconnaissance Orbiter detected that the craft, considered lost and destroyed on landing, was still on the surface of Mars, and that Hirst’s artwork remained intact, becoming the first work of art to reach the planet.

Like in the Lascaux caves, artists anticipated and prefigured in their work the fundamental questions surrounding the future of humanity and its drift. When government agencies began seriously to investigate the conditions that would allow humans to live beyond Earth’s frontiers and private sector companies, such as SpaceX, went public with their project to colonize Mars, the artist community became less interested in the success of these missions than in highlighting a new history of colonization in the cultural imaginary. It had for some time been speculating on the devastating consequences of climate change and the headlong rush of a humanity that revolted against extinction, reflecting on the inequalities of future colonization and what interstellar exodus would entail.

An example of this is the work of Vibha Galhotra, oscillating between the traditional and the technological. Galhotra explores the impact of human behaviour on the Anthropocene and its devastating consequences. She explores the capitalist logic that sees interplanetary migration as a way of escaping inevitable ecological catastrophe. Her sculptures and installations have a formal elegance reminiscent of traditional Indian culture. In her Life on Mars series (2020), she uses NASA images of the planet’s surface that she turns into hand-sewn murals made up of ghungroos (small metal bells worn by Indian and Pakistani classical dancers). Galhotra plays with processes of construction, deconstruction and reconstruction, combining reality and science fiction.

The work of artists like Halil Altindere and Janet Biggs analyses concepts such as that of the space refugee alongside the migratory crises on our planet. The Turkish artist creates a Fellini-like semi-utopia with the short film Space Refugee (2016-2018), featuring Muhammed Ahmed Faris, the first Syrian astronaut in space (a crewmember of Soyuz TM-3 to the Mir space station in 1987), who became an avid opponent of Syrian President Bashar al-Assad and is now a refugee in Istanbul. In the film, millions of Syrians leave their homeland in search of refuge in settlements on Mars. Faris contemplates the possibility of a better world on an empty planet devoid of the complexities of national politics.

Seeing Constellations in the Darkness Between Stars | Janet Biggs

The US photographer, performer and video artist Janet Biggs is known for her films of imposing, almost supernatural landscapes in inhospitable or politically compromised areas. Her miniseries-style work Like Walking on Mars (2018) combines images of the Mars Desert Research Station in Utah (used to simulate living conditions on Mars) with scenes from a Yemeni refugee camp in Djibouti, Ethiopian emigrants, observatories in the Canary Islands and a video recording of a rover on Mars. The theme is always the same: human movement, search, displacement and resettlement—the Ethiopian population driven out by drought, Yemenis escaping war and hunger and the destruction of the Earth by humankind that drives us to colonize Mars.

Will Earth’s socio-political dynamics be repeated in the new Martian colonies? Will the settlements on Mars be Noah’s Arks for the super-rich, or, as in Total Recall (Paul Verhoeven, 1990), will they lead to a fantasy of segregation where only the most disadvantaged classes have their extraterrestrial plot, leaving the Earth for a privileged few? Following Jameson’s maxim “it’s easier to imagine the end of the world than the end of capitalism”, the essence of which is captured in Mark Fisher’s “capitalist realism” (Capitalist Realism, Zero Books, 2009), everything seems to indicate that this new space race led by private companies will accentuate social and economic inequalities in a form of capitalism that expands beyond our atmosphere.

The candour of the men and women of the Lascaux caves and the optimism of the Space Art illustrators has somehow been replaced by a contemporary art unable to imagine a future that is not a reflection or an infinite repetition of the present and its socioeconomic conditions. Art suggests that capitalism, not humankind, is the real conqueror of worlds. 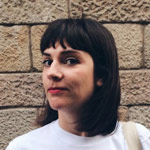 Through comics, we analyse the evolution of our view of the Red Planet: from a territory to be conquered, to a reflection of our own nature.

William Kentridge: “There are fault lines that come from the colonial period throughout the world”

We talk to the South African artist about segregation, the echoes of colonialism and the anti-racist struggle.