With his tireless activity as a science writer and theories such as the predictions our brain makes when it perceives reality and configures our experience of it, the British neuroscientist Anil Seth has become one of the most representative and authoritative voices in the study of consciousness. He is the author of numerous important articles and of a best-selling book in which he tries to explain the meaning of what it feels like to be ourselves: he doesn’t talk about identity, but encourages us to be aware of the privilege of being an organism that is alive and knows it.

We need to know who we are in order to survive. And we are someone because we are something, in other words, because we have “this feeling of being alive”. As the great science writer that he is, Anil Seth (United Kingdom, 1972), presents his object of study and some of the most complex conclusions he has drawn from it in an attractive way, despite the fact that the exercise he proposes requires us to analyse ourselves from the most essential experiences, where science borders on philosophy. He shies away from terms such as “mystery”, because faced with the immensity of all we do not know, there is the possibility of learning.

Professor of Cognitive and Computational Neuroscience at the University of Sussex, he is an expert in the mechanisms by which our brain captures the most relevant information for our survival. Thus, to address such a broad and controversial topic as consciousness, he starts from basic (although far from simple) definitions, for example, being oneself – with the nuances and difficulties that the interpretation of the term “self” has historically entailed – means that it feels like something to be you. Broadening the focus, we understand, then, that the first step in understanding the set of perceptions that form our experience of being is to observe what is in front of us and the surrounding phenomena that feed our perceptions. This initial definition is largely inspired by the work of the thinker Thomas Nagel. For the research Anil Seth is carrying out, philosophy is just as relevant as other scientific disciplines such as biology, neurology, physics and chemistry.

At a time when scientific and technological advances seem to have revealed to us the systems and mechanisms that make life possible, a great challenge that is now being tackled in the area of neuroscience is the question of how consciousness works. “In the same way that no one in the field of science asks why the universe exists, it’s a mistake to ask why consciousness exists and to pose it as a mystery. What we need to do is to study and analyse its properties to better understand how the brain and the body work,” he says.

Antonio Damasio and Anil Seth | The Mysteries of Consciousness

As a result of the research carried out in his lab, he has published the international bestseller Being You. A New Science of Consciousness (published in the UK by Faber & Faber), the Spanish translation of which will appear in spring 2023, the informative volume 30-Second Brain, The 50 most mind-blowing ideas in neuroscience, each explained in half a minute (published in the UK by Icon books and in Spain by Blume), given numerous conferences around the world. He leads various research centres, such as the Sackler Centre for Consciousness Science and the Canadian Institute for Advanced Research, and he is also editor and advisor to leading scientific publications specialising in the study of the brain.

In October 2022, in Barcelona, he took part in a public discussion with the neuroscientist Antonio Damasio as part of the Biennial of Thought and the exhibition “Brain(s)” at the CCCB. During the same visit, in the course of a seminar with Ricard Solé, curator of the exhibition and ICREA research professor, he debated some of his most controversial theories with other heads of research centres from all over Catalonia. The possibility of measuring the different degrees of consciousness in people and the difference between consciousness and awareness (that is, the ability to be conscious) took up most of the debate. He also presented the project “Dreamachine-The Perception Census”, which he leads with Glasgow University Philosophy Professor Fiona MacPherson. It defines itself as the first citizen science project on perceptual diversity, and invites people from across the globe to take part in experiments using their computers or other devices to record the infinite forms of perception that exist in the world.

Taking as a starting point the findings made possible by neuroscience, for example that the human body is a kind of biological perception-making machine with which we construct our sense of reality, and that, based on all these perceptions, our brain sends a series of instructions to our body to act in accordance with its environment, Seth situates his research in the gap or crevice that exists between the experience we obtain from these perceptions and the emergence of consciousness. Or, as he puts it in 30-Second Brain: in the as-yet unknown realm of how the water of the brain generates the wine of consciousness. This is where the “hard problem” of neuroscience, pointed out by another philosopher, David Chalmers, arises. Although, according to Seth, we still know very little about this gap, as mentioned above, we should not talk about it as if it were a mystery: science must investigate the workings of the brain and the body to understand the mechanisms of consciousness that give meaning to the phenomena they experience. Observations such as these form the basis of his theory regarding predictions, which was one of the few points of friendly divergence that came up in the meeting with Damasio. According to this theory, the fact that our experience of reality is composed of the perceptions we receive through our organs before being ordered by the brain, should not be understood as meaning that the world penetrates us and that we assimilate it. In Seth’s view, the brain is always making predictions about what is happening in the world, expectations that are supplemented and confirmed or modified by the experiences we obtain from contact with the environment. In order to make himself understood with his characteristic effectiveness, Anil Seth speaks of reality as “controlled hallucination”: “our experiences are the content that the brain predicts from the inside out, anticipating what is in the world, and the information from the senses ties us with what exists in the world in a way that’s useful for our organism”. Therefore, this hallucination is not a false perception or a perception of something that does not exist, but a perception modelled by our body and controlled by the brain, which applies a kind of prior template to give meaning to what we feel. In this way, each new experience is of use to us as we move through the world to which we belong. An example of this controlled hallucination is colours: “we already know that colours don’t exist in nature, but evolution has made us interpret the world in colour because it was more useful for our survival”.

Survival and a non-traumatic relationship with our surroundings is always the goal of living beings. This is the clearly materialistic statement of principles that Seth holds by, even though he is sympathetic to theories and cultural traditions that have tried to explain consciousness from other perspectives: “Psychoanalysis was useful for investigating aspects of the subconscious, at that time, they had no other tools for studying the brain; and now it’s a tool for therapy or literary criticism.” He rejects any theory that speaks of the spirit or soul as a kind of “magic sauce or dust” that emerges from matter and can be detached from it once matter dies, but he connects with theories that speak of “basic experiences such as memories, emotions, humour… the feeling of being alive. This is the root of all experiences of consciousness, this basic perception that the brain has of the physiological state of the body”.

The brain that is aware of itself and that thinks of itself: a situation that necessarily calls for the assistance of philosophy, and from among the main theories, that of phenomenology. Seth places the origin of the experience of being in a germinal perception of the body as a phenomenon to be controlled. And “not just to survive, but to be more comfortable”. Once again, Seth’s brief affirmations offer a whole array of meanings: in order to achieve an overall order, the objects and events we perceive must be well placed, and for this purpose, being intelligent is not enough. He warns that we must not confuse consciousness with intelligence. We already know that the latter can be artificial, but regarding the former, “if we were to construct artificial consciousness, it would certainly be an ethical disaster”. Although advances in artificial intelligence, virtual reality and other computational technologies have contributed to the development of science, medicine and social transformation, this does not mean that we cannot question the necessity of creating machines so similar to human beings: “we could end up creating a cognitive illusion, and this would be very difficult to deal with”. Even so, he has a lot of confidence in science, technology and philosophy, and he is sure that any discovery or finding is a reason for optimism, to combat neurological and mental illnesses, to gain a better understanding of human beings and to continue to find the right questions. 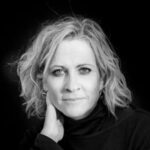 Journalist, writer and cultural manager with a PhD in Hispanic Philology.