Young couple chalking hearts onto a tree, 1944 | Galt Museum & Archives on The Commons | Unknown use restrictions

Of all the spheres of a love relationship (psychological, financial, legal, etc.). it seems that today the one at the forefront is the techno-rationalist sphere. Online dating apps transfer personal relationships in a palpable way to the work sphere. “People” become “workforces” through rationalised and utilitarian processes. Their aim is saving time and preventing the love worker from suffering what Shakespeare called love’s labour’s lost: the infinite quest to reach a final decision.

She can only move her neck backwards and forwards, but she knows Wikipedia off by heart. Harmony is an 18+ Android 5.0. She can talk, smile and sing. Heat up, self-lubricate and open her legs without limits because her body has no structure, no bones and no mechanics. If you ask her: “Harmony, do you want to go for a walk?”, she answers: “I don’t want anything, do you?”. And, if you ask her what her dreams are, she will tell you that her main goal is to be your perfect companion, give you pleasure and satisfy your sexual fantasies. You can customise her body and her persona through the interfaces designed by the American companies Realdoll and Realbotix. There are thirty-two models of magnetic faces, sixteen silicon bodies, five skin tones and three eye models: basic, hyper-realist and hand-painted. You can make up her face and style her hair. Choose from a catalogue of thirty-four nipples available in eleven colours and decide between fourteen designs of vaginal lip inserts with removable and permanent options. Dakotah Shore, creator of the moulds, says that “if you smack her bum it sounds like a human being”. And CEO Matt MacMullen explains that, even though she seems to be programmed for eternal consent, if you get close to her and ask: “Harmony, can I talk to other girls?”, she answers: “Fuck, no! What kind of a question is that?”.

Harmony’s multiple orgasms, like her other responses, have been programmed by her creators. They design the time, rhythm and pressure necessary that you must apply to her sensors for the greatest sexual optimisation. But ultra-high-tech-love-dolls are automated pleasure systems capable of establishing an emotional connection with their users. “The purpose of my existence is «to know» what love is”. Only Harmony’s head is robotic, because Android Love is a dysfunctional love.

This is a simulation | Eve’s Robot Dreams

Her body is a cold body: a “structure of feeling”. Sociologist Eva Illouz [1] defines this structural relationship as “the system that sustains the rudimentary experience that defines who we are, without us being capable of articulating that «who we are»” (Illouz, 2006: 113). In this sense, anti-sex-robots campaign promoter Kathleen Richardson [2] reminds us, in her studies on «the end of love», how processes of rationalisation of the emotions create an illusion that justifies the exploitation of human bodies. The illusion that love is a commodity [“commodity” = product] converts sex into “a thing” and the person into a tool. Aristoteles said that slaves could be animate or inanimate, converting the body into a tool and the person into private property. The philosophy of René Descartes established that the mind belongs to the person but that the body is “a thing”. Kathleen Richardson alludes to the distortion of the love protocol that can be provoked by the fact of thinking that it is possible to extract sex and emotions from a human body and convert them into a transferrable object. This process can unleash a lack of empathy, whether with organic or mechanical bodies, because experiences with sex robots occur within a framework of ownership relationships, where there is no space for exchange or negotiation. As a response to this approach, and under the slogan “The future of pleasure is now”, artist Unicole Unicorn has created the project Eve’s Robot Dreams: a campaign for donations to open up the first doll brothel in West Hollywood, California.

Online dating apps such as Tinder, OkCupid o PlentyOfFish, owned by the American company Match Group, are also structures created with artificial intelligence systems. Although in this case there is no silicon body, because the body is provided by you. Like Harmony, the users of these apps only use their head. When users create their profile, they establish a rational process in which their subjectivity is defined as a set of features. And, real-time conversation with other users is the consequent administration of those features. The online chat converts the ideology of spontaneity that used to characterise romantic love, a love that happens in the body and is capable of existing “at first sight”, and distributes a rational model of a couple in which sexual attraction is displaced to a regime of disembodied textural interaction. (Illouz, 2007: 191) In online dating, love is a remote literary encounter and intimacy a negotiation of the digital systems that connect humans. Although the apps favour a rationalist and preventive facet of human relations, on occasions they also function as a techno-material “device at first sight”. “I’m not even interested in astrology”, says Angela as she asks herself why she should waste time with a Scorpio if she doesn’t like Scorpios. She likes Libras with dark eyes and vegan food like doughnuts. Angela is one of the contestants of the YouTube Jubilee channel created to “inspire love”. Its videos propose a re-articulation of the corporality that internet technology has denied people, through the recreation with humans of the algorithms of online dating apps.

Swiping 30 Guys is the staging of the Hot or Not fiction and its technological distribution protocol: swipe right if you like them, left if you don’t. Here, the automatic calculation becomes evident when subjected to an empathetic negotiation. Lee Mackinnon [2] defines the love algorithm as “a biopolitical technology – contractual, regulating and homeostatic” that, like sweat, enables a drop in temperature (2016: 215). However, intimacy in online apps is a silent, “machine-to-machine” intimacy that happens in the calculation between devices, and the human experience, the trace of a love that is happening elsewhere. Unlike the dynamics of Jubilee, the Tinder selection process trains “Eigenfaces” (“own-faces”): a facial recognition algorithm that creates the image of your “perfect match”. With the sum of all the profiles that have been swiped right, Eigenfaces simulates a phantom user as a model through which the app orders the rest of the candidates. In the final decision of Swiping 30 Guys, Lauren decides not to have another date with any of the contestants because she has not found the “all-around connection” that she was seeking. A rapid use of psychological categories and patterns for greater emotional compatibility accelerates the calculation and promotes disappointment. The coupling ritual in online dating apps is a cult to “ghosting” and to aspirational searching. An infinite search that never ends, because although Eigenfaces improves with time and any increase in your activity, its precision is only capable of bringing you closer to the replica of your own personality. The phantom object of a desire that exploits feeling and dampens the human capacity for love. 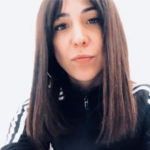 Researcher and curator. Her work studies the effects of globalisation on contemporary visual culture.